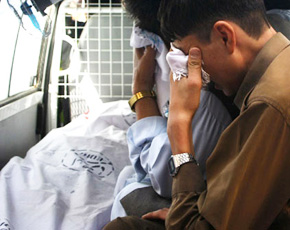 From Cairo to Peshawar, Shias are under attack by Sunni militants. The sectarian warfare targeting Shias has left thousands dead. The rest of the world watches silently as Muslims self-destruct in sectarian wars.

Earlier on Sunday, a lynch mob near Cairo (Zawyat Abu Musalam), Egypt, murdered four Shias who had taken refuge in a house. The mob dragged their corpses in the street as hundreds watched from the rooftops. In Iraq, a series of bombs continue to kill and maim Shias. In Pakistan, Sunni militants attacked a mosque killing 15 Shias on June 21. In Bahrain, the Saudi-backed regime continues to harass the Shia majority, which is demanding more political rights.

Across the globe, the Shia-Sunni schism has taken a turn for the worst. The Syrian conflict has pitched the Iran-backed Alawite regime against the Sunni majority, who is being supported by Saudi Arabia, Egypt, Jordan, and other Gulf states. What may have started as an internal conflict in Syria has transformed into a sectarian civil war, which threatens to plunge the billion-plus Muslims in a bloody sectarian warfare.

Sheikh Hassan Shehata, a prominent Shia scholar in Egypt, was attacked and killed in his house along with three others in Zawyat Abu Musalam. The mob numbering hundreds set the Sheikh’s house on fire. Initial medical reports suggest that Sheikh’s neck was cut with a sharp object while severe trauma was inflicted on his and others’ skulls. The grisly videos posted on the Internet show the mob, including several women, watching the brutal attack, but making no attempt to stop it.

The Muslim Brotherhood, the right-wing group that supports Egyptian President, Mohammed Morsi, has been pandering to the Salafists to muster support against the Egyptian National Opposition, who have threatened massive street protests on June 30. The underhand dealings between the Egypt’s ruling party and the Salafists made it possible for the extremists to run a campaign of fear against Shias over the past two weeks that culminated with the murder of the Sheikh and his followers.

If it were not for the brave activist, Hazem Barakat, who tweeted the videos and his willingness to testify against those who orchestrated the lynching, the world would not have known of the brutality of these attacks.

The hitherto unresolved conflict in Iraq continues to add victims as suicide and car bombings by the extremists continue to kill Shias. Earlier on Monday, a series of bomb blasts in and near Baghdad killed 42 people. Since April 2013, more than 2,000 have perished in sectarian violence in Iraq. The blasts were staged strategically in Shia neighbourhoods in Baghdad.

In Pakistan, the militants have literally run over the country where they target Shias and other minorities at will. Even worse, the militants have started to target the judges who have heard cases against the militants. The bomb attack on the High Court judge, Maqbool Baqar, which left him with serious injuries while his driver and eight others in his security details died, is a clear message from the militants that they have no interest in respecting the State or its institutions.

The Taliban spokesperson while speaking to the media revealed that they targeted Justice Baqar for his “anti-Taliban and anti-mujahideen decisions.”

Earlier in the week, armed men dressed as paramilitary police in a remote mountainous area in Pakistan attacked a hotel killing nine foreign tourists. The Pakistani Taliban took responsibility for the attack, which they claimed was in retaliation to a drone strike that killed a Taliban commander, Waliur Rahman.

The attack on the tourists in Gilgit-Baltistan is eerily similar to the attacks on Shias in the past in the same part of Pakistan. In August 2012, armed men wearing uniforms of paramilitary police stopped three buses near Mansehra and killed 20 Shias after removing them from the buses. It was the third such attack in six months.

The scale of violence in Syria, however, has crossed all thresholds. The UN is reporting over 93,000 dead. For months, many saw the Syrian uprising as part of the Arab spring where democratic forces stood up against decades of dictatorship. This is no longer the case in Syria. The Bashar al-Assad regime’s violent crackdown against protesters in March 2011 has turned a political struggle into a civil war where foreign forces have joined in to add to the misery. The Assad regime is receiving support from Iran and Lebanese Hizbullah. The Shia support for the Alawite regime has irked many Sunni Arab states who have funneled billions of dollars to the Syrian rebels.

Like Iraq, Syria has also fallen into a sectarian warfare where plenty of blame could be shared by all warring factions. The real tragedy of Iraq, Syria, Bahrain, and Pakistan is that these conflicts have plunged the Muslim world back into a centuries old sectarian conflict. The movements for political rights have been taken over by the militants belonging to al Qaeda, the Taliban, and hundreds of their local franchisees across the globe.

It is likely that after some agreements, the al Qaeda and the Taliban may stop their violent campaign against western targets. It is, however, very likely that the slaughter of Shias will continue across the globe for decades at the hands of extremists.