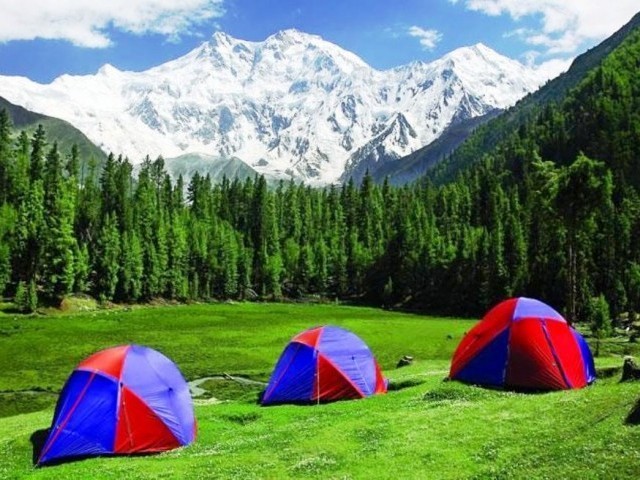 A tourism rescue system should be established and intelligence agencies should do their job rather than poking their nose into the minute internal matters of the region. PHOTO: PUBLICITY

Yesterday was a sad day for Pakistan. 10 foreigners, who were in Nanga Parbat to witness first hand the country’s beauty, were murdered in cold blood, allegedly to avenge a death caused by drone strikes. How these innocent travelers are related to drone strikes is beyond me.

You know what is even sadder? Reportedly, local tour guides have started to receive emails from tourists who were to visit the area in July and August. They do not wish to visit Pakistan anymore; they have requested for the cancellation of their reservations.

If you thought this lone incident would bear no affect on the country, think again.

Essar Karim, who works as a local tour guide stated that he received the following email from a European traveller:

Oh my God! Such friendly people; such a peaceful place. How did it happen?

Exactly my sentiment. How did the Government of Pakistan let this happen?

My attachment to Gilgit:

Among the tallest mountains in the world lies one of the most beautiful lands one can ever behold: Gilgit-Baltistan. It is famous for its influx of foreign tourists during the spring and summer seasons. Unfortunately, however, this influx has steadily declined over the past decade, terrorism in Pakistan being the main reason.

After spending two years in the US to complete my Master’s degrees, it was a wonder and a relief to be back home. I was welcomed with the views of beautiful valleys, sparkling fountains, massive mountains, and beautiful scenery. What made me rejoice even more was the fact that G-B not only had these many gifts of nature, the region was enjoying peace after a long time. People were hopeful about tourism prospects this summer and its potential to generate sustainable wealth for the region.

I landed in Islamabad and bought a ticket to go home; to my surprise, I could not get my ticket confirmed due to the high flow of tourists to the region! Despite the setback, I was happy to learn that G-B has restored its tourist flow again. Many tour guides were also happy about the inflow, as a significant number of these people earn their livelihood through tourism in the region.

While I was in Gilgit, I saw many foreigners shopping and adding life, and varied richness to the city – even the G-B tourism ministry report declared a higher flow of tourists to the region.

However, tourism has been severely hindered because of the way our government treats tourists.

My observations of how tourism has been hindered:

An activity I observed that struck me as very unusual was that security personnel were interrogating the tourists in the city, even though it does not fall under their jurisdiction. Unfortunately, tourists were even barred from entering most of the glaciers in the Baltistan region as well; this region is famous for its hospitality and pacifism.

The fall in tourism in GB has many reasons and one of the main problems is the No Objection Certificate (NOC) policy of the federal government; as tourists have trouble acquiring an NOC to visit G-B, the flow is artificially decreased from the federation directly.

The extremely tragic incident at Nanga Parbat is one of the worst blows to impact tourism in the Diamer District (which borders KPK and Kohistan). It is certain that G-B will be thrown ten steps back and will have to work doubly hard to regain the trust of tourists. This one incident has taken away the hopes of the tourist friendly people of the rest of G-B.

I was talking to a local and his words struck me because they depict the depth of sorrow that people feel after the murder of the tourists,

(We have had tourists in our area after such a long time and today, after this incident, our children’s future has become dark.)

A year ago, many Shiites were slaughtered, butchered and stoned to death in same region. The murderers were dressed in military outfits and were highly trained. Unfortunately, the killers got away with the heinous crime; had they been hung publicly, no one would have ever dared to commit such a heinous crime again.

The lack of appropriate punishment has ruined the social fabric of Pakistan. Likewise, it is engulfing the peace of G-B, particularly in the Diamer district.

We, the residents of G-B, demand stringent action against terrorists carrying out such atrocious crimes; these are not reflective of the people we are. If this incident is ignored like the incidents in the past (e.g; Lulusar, Kohistan and Chilas), then the locals have every reason to doubt the sincerity of the security agencies within the region. It is nearly impossible for the miscreants to get away easily due to the tough terrain of the area. The mountains of the district should be searched thoroughly and operations should be carried out to take them head on. Furthermore, to tighten the security of this district, it should be handed over to the Gilgit-Baltistan scouts for search operations and particularly for the security of the foreigners, as they know the area better than anyone else.

To ensure the security of tourists, the provincial government should be empowered, and they should be given the authority to brief and debrief those in Gilgit-Baltistan and those who visit as well. A tourism rescue system should be established and intelligence agencies should make it their priority to do their job, ensuring security, rather than poking their nose into the minute internal matters of the region.

G-B is already under-served. If tourism is affected – as it indeed will be because of the Fairy Meadows incident – then it will descend into absolute desertion such as that of beautiful Balochistan.

I reiterate that the people of G-B are tourist-friendly and hospitable; we are peace loving and culturally rich. We have numerous tourist spots that are safe havens for foreign tourists: Baltistan, Hunza Nagar, Astore, Ghanche, Ghizer, and Gilgit.

This incident of terrorism has greatly grieved everyone in G-B; we are stunned as we mourn for the victims and their families.

Needless to say, this is a serious blow to an already under-resourced economy. It is the high time the government prioritises education in the district of Diamer and take serious action against institutions that give birth to this mindset which ruins the appeal of regions like Diamer.

If the government is unable to meet the perfectly reasonable demands of security for the people of G-B, then it won’t be too long before they seek help from those who will! We have waited long enough.

Click here to post a comment
Gilgit-Baltistan: Between the rock and a hard place – by Senge H. Sering
Islamofascists and fake liberals join hand in justifying attack on a Shia judge – by Mahpara Qalandar