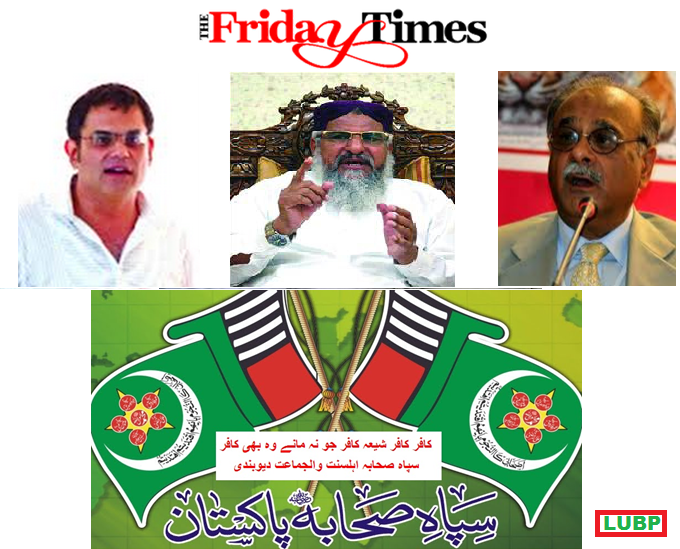 For over a decade, The Friday Times was a respected weekly and very well read. Najam Sethi thrived on its reputation which some of its contributors built up. If you look through the early issues down to the middle of the last decade, you will find a number of Shia and Ahmadi who wrote great articles for The Friday Times. But after the death of Banazir Bhutto and the rise of Islamofascism through Talibanization, politicization and ascendancy of the Supreme Court, and the Shahbaz Sharif-led PML-N government in the province of the Punjab, things began to change. Najam Sethi being a clever man must have sensed that he must jump on to the bandwagon to make the right gains. The Friday Times began to whittle down its criticism of the PNL-N and the judiciary.

People began to leave. Now you will not find the likes of Khaled Ahmed, Ayesha Siddiqua, and Hassan Askri writing for The Friday Times any more. Enter the likes of Raza Rumi, Ali Chishti, Amir Rana and Mohammad Shehzad. Thanks to Najam Sethi’s usual U-turn, The Friday Times was overtaken by pro-establishment fake liberals and became a mouthpiece of the ugliest forms of Islamofascism. Unbelievably, Lashkar-e-Jhangvi (LeJ) aka ASWJ-D (Ahle Sunnat Wal Jamaaat Deobandi) found ample space on it. Just before he was nominated as the caretaker chief minister of the Punjab, Najam Sethi published the infamous interview of Mullah Ludhianvi the chief of ASWJ-LeJ (banned sectarian terrorist group Sipah Sahaba) in which he shamelessly apostatized the Shias and gloatingly announced “To call the Shias infidels is no different from shouting a slogan like Roti, Kapra aur Makaan!”

Despite all protests, neither Sethi nor his editor Raza Rumi apologized for publishing the views of a man who has been the main force behind the Shia genocide in Pakistan. Soon Sethi was upgraded to the post of Punjab’s chief minister. But the immediate by-product of Sethi’s functioning was that once he took over, the readership of The Friday Times plummeted. I have carried out a survey through the social media and approached those who had been avid and loyal readers of The Friday Times. Out of 378 people I contacted, only 2 said that they still read the weekly. That makes a meagre 0.5% of the educated, internet literate Paistanis.

Now The Friday Times stands as discredited a publication as Seth’s ‘liberalism’ itself. But I am sure he is not bothered. The weekly was perhaps an instrument for ‘higher’ aims which have been achieved and a few remaining ones will soon be achieved by Sethi and his cronies.