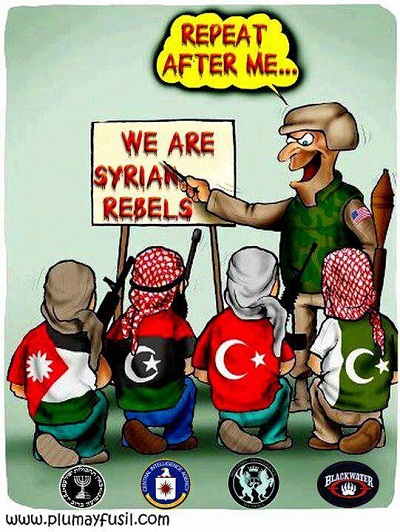 We are posting articles from The Independent and Barnabasfund which describe a massacres in Syria by Wahhabi/Salafi/Deobandi extremists. This confirms the fears expressed by British MP Nick Griffin and other upright politicians that the Western countries and Britain in particular is strengthening terrorists of the same evil ideology that brutally beheaded the British soldier Lee Rigby.

It would be a mistake by Western Powers to think strengthening evil with benefit anyone in the long run. It is time to learn from the mistakes of the past, strengthening Taliban in Afghanistan (against Soviet Russia) at least in part produced more wars, massacres, 9/11 and other terror attacks. Why is another blood thirsty Al Queda style islamofacist insurgency being supported by the West to replace a repressive but largely secular government? 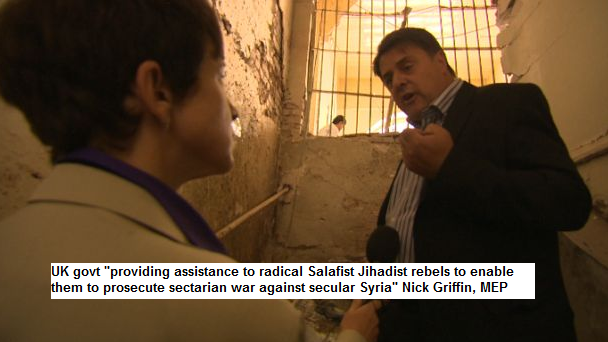 Up to sixty Shia Muslims have been killed in an attack by opposition fighters in the eastern Syrian town of Hatla. A video posted online on Tuesday, entitled “The storming and cleansing of Hatla”, showed fighters waving the black Salafi flag and celebrating.

“We have raised the banner ‘There is no God but God’ above the houses of the apostate rejectionists, the Shia,” the voice of the cameraman says.

The British-based Syrian Observatory for Human Rights claimed that thousands of rebels participated in the killings, although the footage of the attacks pictured just a handful of fighters. The death toll could not be independently verified.

Activists denied that the killings were sectarian in nature, claiming instead that they were a response to an attack on a Free Syrian Army checkpoint by 30 armed villagers from Hatla. The activists claim the opposition fighters were incited by the Assad regime’s decision to arm the population of Hatla, one of the only Shia villages in an area that has been firmly under rebel control for more than a year.

However, the language used in the videos is explicitly sectarian. “This is the Shia, this is the Shia carcass, this is their end,” the cameraman says as a blanket is lifted from one of the victims. That video, posted by a pro-Assad group, indicates those responsible were non-Syrians, possibly from Kuwait. A Syrian government official spoke of a “massacre against villagers in which older people and children were killed”.

A Christian village in Syria was savagely attacked and almost 40 of its residents, including women and children, killed by opposition fighters, as UN investigators warned of increasing radicalisation among the rebels.

The village of Dweir on the outskirts of Homs, near the border with Lebanon, was invaded on 27 May.

One of our Syrian partners told us that two of his relatives in Dweir were severely tortured by the rebels, who broke some of their bones and started to burn their bodies before shooting them in the head.

The villagers who managed to escape the onslaught fled to Raman district, where Barnabas Aid is providing them with aid.

Following the massacre, the Syrian army entered the village and heavy clashes with the rebel fighters ensued.

The following day, independent United Nations investigators warned that the opposition to President Bashar al-Assad is becoming increasingly radicalised and that the civil war is producing ever worse atrocities.

Click here to post a comment
Pakistan Continues to Perpetuate Inequalities in Education – by A Z
LUBP condemns target killing of Ahmadiyya Muslim, Hamid Sami, by Deobandi militants in Karachi