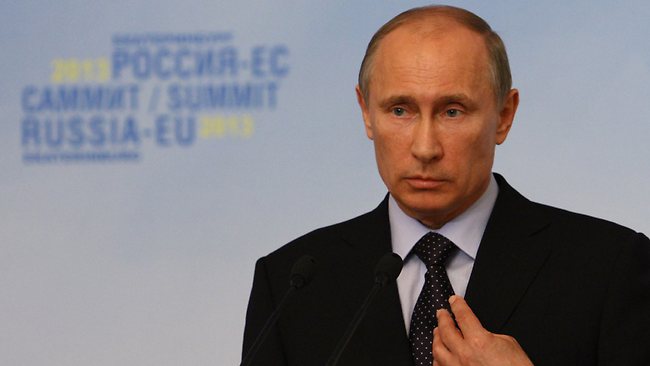 RUSSIAN President Vladimir Putin, known for his black humour, has said he hoped that Syria’s opposition will not send organ-eating rebels to proposed peace talks.

Speaking to an EU-Russia summit, Mr Putin described seeing televised footage in which “members of the Syrian armed opposition pull out internal organs of their enemies and eat them”.

He seemed to be referring to a video uploaded to YouTube in May which showed a rebel apparently cutting out and eating the heart of a Damascus regime soldier.

“I hope that such participants of the negotiations do not appear at Geneva 2,” Mr Putin said of world powers’ second attempt to solve the crisis through direct negotiations in Geneva.

“Otherwise, it will be hard for me to ensure the safety of the Russian participants. It would also be hard to work with such people,” Mr Putin deadpanned.

The video showed a rebel leader leaning over the body of a uniformed soldier before cutting out his heart and then raising it to his mouth, provoking horror around the world.

Washington said it was “appalled”, while the moderate Supreme Military Council of Syrian rebel fighters insisted it did not support such actions.

While Syrian President Bashar al-Assad’s regime has agreed “in principle” to attend the talks, the main opposition National Coalition is refusing to take part until key demands are met.

The National Coalition has been recognised by many Western and Arab governments as the sole legitimate representative of the Syrian people. Russia supports Mr Assad’s regime.