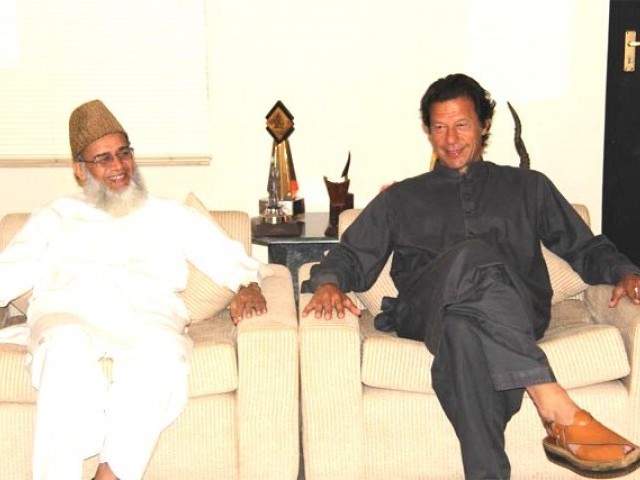 The decision by the PTI ‘s provincial government to give education ministry to Jamaat-e-Islami (JI) will have monumental negative effects on education and future generations.The Jamaat-e-Islamai is a non-electable party, yet it controls Pakistan. In fact, today’s Pakistan is not Jinnah’s Pakistan, it is Jamaat-e-Islami’s Pakistan.The Jamaat sees itself as the defender of the so-called ideology of Pakistan. In a way the Jamaat-e-Islami is the civilian regiment of the Pakistani military establishment. The Jamaat has been pursuing security goals of the military establishment in civilian sphere by following an aggressive agenda that often approves violence and hatred in the name of Islam and nationalism. The Party’s world-view and agenda have isolated Pakistan. No doubt the world perceives us as a weired society.

Terrorism and militant groups such as Al-Qaeda and the Taliban are accumulative and logical results of the ideology that the Jamaat has successfully imposed upon Pakistan by its influence and infiltration in the Pakistani education system, media and the military.

The Jamaat uses the education system, media and the military to set the political and social agenda for Pakistan. Our value system and domestic and foreign policies are influenced by the Jamaat’s ideology that encourages intolerance, racism and discrimination in the name of Islam.

The Jamaat had hijacked Jinnah’s Pakistan in 1948 by making the disastrous Objective Resolution a part of the constitution. Since then the Jamaat’s policies have harmed Pakistan in all respects.

General Zia-ul-Haq was an obnoxious and evil person but in Zia-ul-Haq the Jamaat-e-Islami found a patron and Godfather. The Zia-JI nexus proved deadly for Pakistan.

During Zia’s era Jamaat infiltrated in our education system. Similarly many Jamaat-e-Islami activists joined major media houses as journalists and writers. Almost 90 percent of today’s leading Urdu columnists, writers and opinion makers were at some point associated with the Jamaat-e-Islami. They all have been promoting a vision and discourse that is in conformity with the Jamaat’s ideology.

A large number of military officers, especially in the ISI and MI, are either JI members or influenced by the Jamaat-e-Islami religious and political ideology and agree with its agenda. As a consequence General Zia-ul-Haq is alive and kicking in Pakistan at all levels.

During the past two decades the JI leadership has realized that their party may never gain power through elections. This realization forced them to change their strategy. Besides using the military, media and education platforms they have also started infiltrating into right-wing political parties.

The IJI birth before the 1988 election is a classic example of the JI’s new strategy where General Hamid Gul, another Godfather of Jamaat-e-Islami, put together an alliance against the people of Pakistan to continue General Zia’s agenda.

In the following years, many activists and supporters of Jamaat-e-Islami joined the Muslim League Nawaz. Some became media managers of Nawaz Sharif. However, when due to his own political and business needs, Nawaz Sharif changed his political discourse and wanted to develop relations with India the Civilian Regiment turned against Nawaz Sharif. The Jamaat has not given up on PMLN but now Imran Khan’s PTI is their new target.

Again many JI activist and supporters have joined the PTI ranks. They have been trying to influence Imarn Khan’s political agenda. Due to such elements, at times, the PTI seems like a modern version or rebirth of the Jamaat-e-Islami. However, despite his Islamic rhetoric, Imran Khan is a Westernized man and thus a misfit for the Jamaat’s agenda. Also Imran Khan has attracted upper middle classes who will never accept Jamaat’s outdated and aggressive agenda. Many of Imran’s close associates are Westernized liberals and they don’t like the Jamaat’s brand of Islam and politics. Still, the Jamaat-e-Islami minded elements have significant say in the PTI.

The inner conflict and struggle has caused confusion about the identity and position of the PTI. The Party doesn’t seem to have a clear identity because of different and opposing ideological interest groups, which are struggling within the PTI for dominance.

Now the JI wants to grab the education ministry in the KP. It suits the JI political strategy and longterm goals. Education is a provincial subject and by controlling education the JI will control the direction and discourse of the KP eduction sector. They will influence young minds by structuring school and college syllabuses, selection of teaching and administrative staff and setting up priorities.