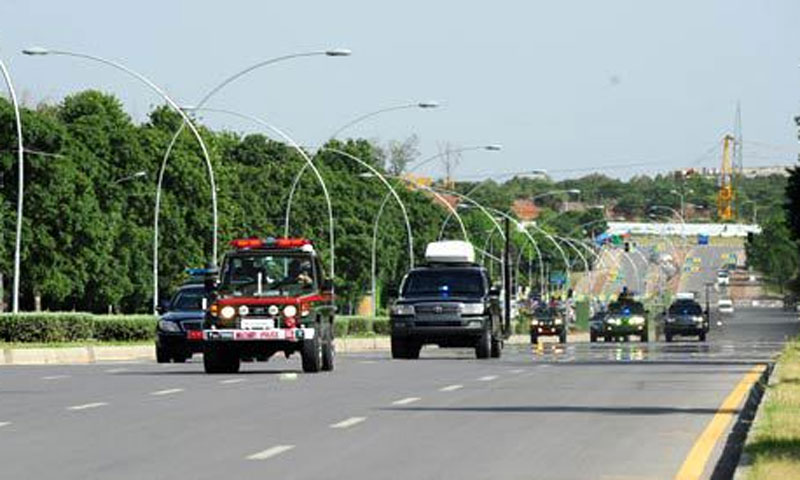 Who is the real power wielder in Pakistan: the Prime Minister or the Army chief?

ISLAMABAD: As Pakistan witnessed a historic democratic transition, many in the county have started to believe that the days of military supremacy are over. But not on the roads, at least not yet.

As Nawaz Sharif, along with his family, left for the Presidency to take oath as prime minister for a record third time on Wednesday, he struck reality on the streets of Islamabad.

The question is: who is the real power wielder in Pakistan? The prime minister or the Army chief? Theoretically, the army chief is answerable to a grade-22 civil bureaucrat. Practically, he is mightier than any elected or non-elected individual in the country.

One such demonstration of this reality was witnessed Wednesday soon after Mian Nawaz Sharif’s election as Prime Minister of Pakistan.

After securing more than two-thirds majority in the National Assembly, the premier reached Punjab House to freshen up.

The prime minister was supposed to reach the Presidency before 4:00 pm to take oath from President Asif Ali Zardari.

At the oath-taking ceremony, services chiefs, political leaders, diplomats and senior civil and military officials had been invited.

PML-N sources and eyewitnesses said first to come out of Punjab House was the SUV carrying first lady Kulsoom Nawaz and her daughter Mariam Safdar. Just behind them were the vehicles of Hamza Shahbaz and Hassan Nawaz.

The convoy of the prime minister was standing at close distance from the cars of his family members. As soon as they reached the outer barrier of Punjab House adjacent to Margallah Road, an alter commando blew the whistle with full force ordering the driver to stop the vehicle.

Consequently, the prime minister’s convoy had to stop as well. The pause remained for two to three minutes.

The commando was there to make sure nothing should obstruct the route of the Army chief’s convoy, only allowing vehicles from Punjab House to pass after the entire convoy of the army chief drove away.

Whether it was a mere coincidence could not be ascertained. None of the PML-N leaders was ready to comment on the incident. But the prime minister might have shared his thoughts with his closest aides.