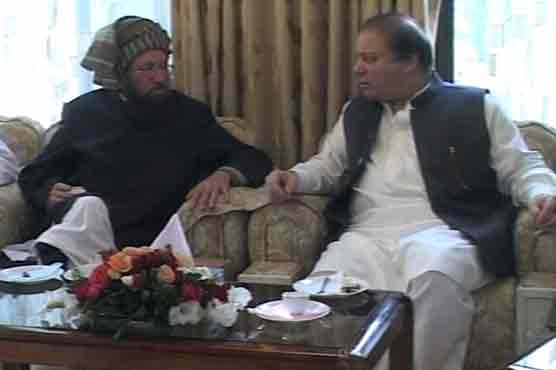 Editor’s note: We are cross-posting an interesting article by Ejaz Haider that shows the futility of any efforts by civilian government of Nawaz Sharif to have dialogue with the TTP (Deobandi militants) through clerics such as Samiul Haq Deobandi, Fazlur Rehman Deobandi etc. The usual caveat is Ejaz Haider’s implicit insistence that TTP (bad Taliban) are different from (Afghan) Taliban (good Taliban). Indeed, the real grotesque comedy we find is authors who supported Pakistan’s policy of arming groups like LeT/JuD against India, are now fuming against TTP. More importantly, these Jihadist-sectarian Deobandi Wahhabi terrorists (Taliban, Sipah Sahaba, Jaish-e-Muhammad etc) were not created by ‘religious charlatans’. These were created by Pakistan army, ISI in particular, to gain ‘strategic depth’ in Afghanistan. It’s the very chickens that our deep-state created that have come back home to roost. The irony could not be greater. Here is a gentleman who is allegedly neck deep with the military establishment, who has for years and years supported and defended militancy to achieve state’s strategic objectives, with the army in charge – now asking a civilian government to roll up its sleeves. It couldn’t get any funnier. Also please take a look at the usual suspects uncritically promoting Ejaz Haider’s piece.(end note) 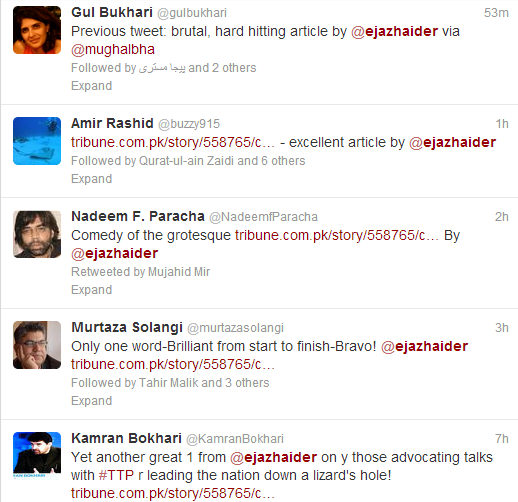 Comedy of the grotesque – by Ejaz Haider

It is amazing how fear can induce individuals, groups, even entire societies to lie, dissemble, surrender their will, and hide from the ugly reality. Fear generates pusillanimity, grotesqueries, chicaneries and charlatans.

Take the example of the Tehreek-e-Taliban Pakistan (TTP) and us. Since a drone strike took out Waliur Rehman, the TTP second-in-command but effectively the terrorist conglomerate’s operational chief, it seems we have all gone into mourning. Maulana Samiul Haq wants us to apologise to the TTP. Maulana Fazlur Rehman is grieved that now the TTP has pulled out of talks and the state of Pakistan must consider this a golden opportunity lost. Others think the United States has, as is its wont, sabotaged another opportunity of making peace with the terrorists.

In plain English, this is bunkum. Would someone indicate to me the womb from whence this certainty of talks offer by the TTP is birthed? Or such talks, if talk we did, would lead to the end of gratuitous bloodletting by the TTP? Or better still, as the thinking in some quarters goes, that with Pakistan streamlining its foreign policy in line with the TTP’s wishes — command is a more appropriate word — and isolating itself, the TTP would surrender its weapons and its motive and somehow dissipate?

None of this will, or can, happen. The TTP has seen how fear works to its advantage. To think it will surrender the very tool that helps it challenge the state and effectively is to raise stupidity to the level of fine art. But let’s assume, given all the mourning, that there was some substance to this mythical talks offer by the TTP. Did the TTP stop the bloodletting as a gesture of good faith? No, it didn’t. So, why should the state relinquish its monopoly of violence, even if it were to enter into a dialogue with the TTP and before that dialogue promised anything?

I began by mentioning fear. It is the most important factor in this war of wills. And fear does not just haunt the commoners, the decent folks going about their daily chores. The more I meet with and talk to religio-political leaders, the more I am struck by how scared they are of the TTP and the fact that they have become irrelevant. It is a matter of deep irony that those challenging the state and society on the basis of an exclusionary ideology were created by these religious charlatans. And in a further twist of irony, knowing that they do not control the narrative any more, they have taken to confusing the people and painting the TTP as a victim rather than the perpetrator of violence.

This has policy implications. Many analysts talk about the necessity of a religious counter-narrative grounded in exegetical work. The argument is that the only way to countervail the religious extremism of the TTP is to show it up for what it is: false. And that can be done only by religious scholars. In theory, this might sound good. But given the situation on the ground, this is unlikely to work. Religious scholars are scared as are the religio-political pretenders. They know that the space has been captured by the TTP and if they were to counter the conglomerate, they will either have to leave Pakistan or get killed. Maulana Fazlur Rehman should know; he had a close brush with them. Others weren’t so lucky.

The consequence of this is terrible.

To avoid falling on the wrong side of the TTP, the clerics use multiple arguments with nary a thought to being non sequitur. Here are some examples:

The TTP’s actions are owed to drone attacks. Tell them that this violence is pre-drone and they will shift gears and say this is because Pakistan entered America’s war. Counter them by saying that extremist terrorism precedes America’s entry into Afghanistan and they tell you that sectarian violence is a different phenomenon. Insist that sectarian terrorist outfits form the backbone of the TTP, they tell you that these differences are centuries old. Try telling them that regardless of how old these differences are, they are generating violence in Pakistani society and they will tell you that these killings are owed to external forces. Ask them what these external forces are and they will name the known foreign intelligence agencies. Turn this on them and argue that if this is right then how can the state talk to the TTP and they give you more poppycock. Ask why the TTP is generating violence in Pakistan instead of fighting in Afghanistan and we come full circle: because Pakistan entered into America’s war.

This is just a bird’s-eye view of the lies they feed. The list of their logical fallacies is long and distinguished only by the fact that many among us refuse to look at this self-serving narrative with eyes wide shut.

Talk to them off the record and they are more truthful, at least some. The business they have been running now threatens their own lives and they know it. Such is their vulnerability that the TTP could get their own seminarians to lynch them.

Corollary: if Mian Nawaz Sharif thinks that he can co-opt religio-political leaders to get the TTP to stop its murderous spree, he is not only barking up the wrong tree, he is in the wrong jungle altogether.

His only option is to sit down, roll up his sleeves and do some hard thinking and work. That would demand understanding clearly the nature of the threat and an assessment of what tools the state has to counter it. Make a list of the state’s strengths and weaknesses as also the adversary’s. Establish a clear friend-enemy distinction and present the state’s narrative without equivocation. Play on the state’s strengths and address the weaknesses. Challenge the lies and half-truths.

The situation cannot be turned around in a day. But it is important to first set the direction. And that requires his version of “We shall fight on the beaches” speech. Does the third-time prime minister, as he takes oath today, have it in him to appreciate the gravity of the situation and rise to meet the challenge, cutting through the deliberately created fog of lies?