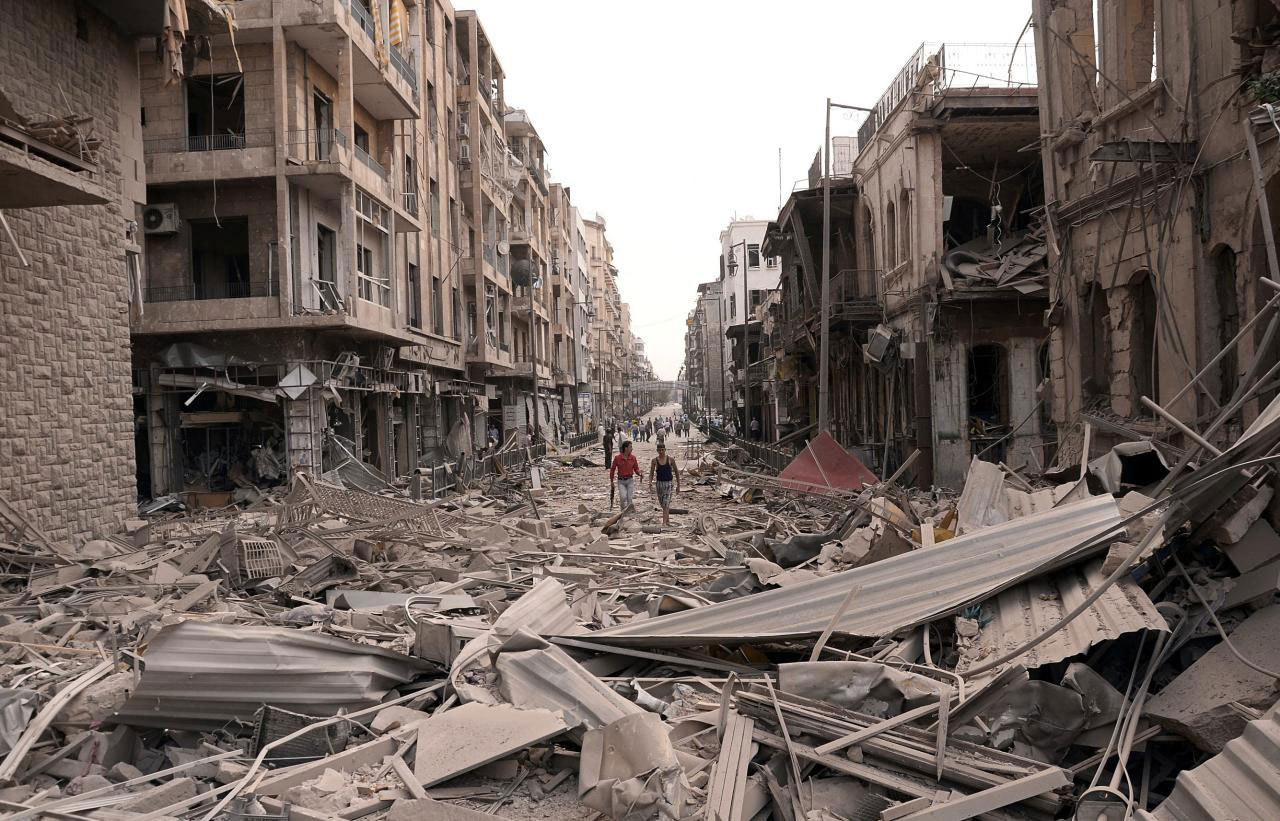 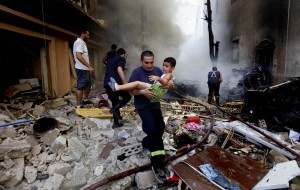 It has been over two years since the Syrian opposition, propelled by long-held and varying grievances, rose against Bashar al Assad. With Assad’s long autocratic reign under serious threat, the regime responded with force, arresting protesters and torturing some to death. In the face of brutality and impelled by their international sponsors, the protests soon turned into an armed insurgency. Given Syria’s location and geopolitical stakes in the region, the only way the rebels could have secured a favourable outcome was to be able to topple Assad on their own, either through peaceful means or through an armed insurgency. However, that was not to be and Syria today is stuck in an accelerating helix of proxy warfare. Syria has become the frontline of the Shia-Sunni conflict reignited by Iraq, with à la carte intervention by international and local powers such as the US, Israel, Saudi Arabia, and Iran. The fact is that every considerable world and regional power –Turkey, the Gulf Arabs, Iran, Israel, the US, Russia, the West and others- is now involved in Syria. This has sent the stakes spiralling and now any outcome will entail a huge price. Any possibility of a clear victory for the rebellion appears remote in view of the infighting and deep divisions within its ranks. While Assad’s regime has turned out to be more tenacious than was estimated, with all the powerful nations arrayed against it, a clear-cut victory for the regime is also out of question. Facing an existential threat for their community, Assad’s forces are killing on whatever scale it takes to survive. However, Mr Assad’s vaunted “security solution” is not working. He cannot regain control of the country. Meanwhile the loss of life has now surpassed 100,000 in this small country.

The truth is that Assad’s regime was never as vulnerable or unpopular as it was depicted to be by the West and the Gulf Arabs. The proof being that after two years of a savage war and international isolation he holds almost all the major towns and cities of the country and the nucleus of his regime has held together. His forces have also made some gains on the battlefield in the past two months. The rebels are so divided and dysfunctional that they are not capable of ensuring a collective victory. In fact the rebels’ hopes reside in a Libya-style solution in overthrowing Assad, as was Gaddafi by NATO in 2011, and then rebels taking over in the world view.

So amidst all the cynicism and savagery, is there an end in sight to the civil war? I think the only credible hope lies in the multi-party parleys that the US and Russia have talked about sponsoring. This holds the only realistic chance of the warring parties to step back from the violence. For the regime it makes sense as it is in a stronger bargaining position after the recent gains in the battlefield, whereas the opposition can be pressurised by their backers to participate. However, for these to happen in a meaningful way, the US will need to reconcile itself with the reality by abandoning its insistence on the regime change and allowing Iran to participate in the talks. The US assertion on regime change has been a hurdle for Russia and China, especially in view of the experience following the overthrow of Qaddafi in Libya. And Iran wields the greatest influence on Assad’s regime. For the talks to go anywhere, the rebels and their foreign backers will have to abandon hopes for a definitive victory and look for a modus vivendi with the Assad regime. This could comprise an agreement to the changes in the structure of the regime, security for the Alawite community, the exclusion of more extremist forces from a role in the future government, a greater role for the majority Sunni community in the set-up, and genuinely fair and free elections. Any diplomacy with a pre-condition who holds power is set to flounder because both sides believe they can win this war.

In the event the above talks fail then Syria seems likely to descend into a deadlock with various groups holding on their fiefdoms in various parts of the country while civilian suffering continues to rise. Western and Gulf Arab governments would not really mind such a stalemate as it would undercut Iran’s and Russia’s strategic positions. This can involve a ceasefire with sporadic hostilities, where each holds the territory it currently controls.

However, in the longer run this will likely see the conflict spilling over beyond Syria. Syrian crisis has placed Lebanon in the most precarious position in its history since the end of its civil war. Hezbollah’s entry into the war has strengthened the divisions in a highly polarized country. Recently there have been clashes between Alawites and Sunnis in the city of Tripoli. The Sunnis up in arms in Iraq are looking for alliances with the rebel forces in Syria. As the Kurds in Syria carve out a niche for themselves, tensions in Kurdish areas in Turkey continue to rise, whereas Syrian Kurds look to the Kurds in Iraq for succour. Syrian civil war also has major implications for Jordan which can feel a palpable disquiet in its overwhelmingly Sunni population as Syrian refugees in Jordan now amount to about 20% of that tiny country’s population. Any further gains by the extremists in Syria will also embolden their counterparts across the border in Jordan.

Quite an imbroglio! Isn’t it? However a more Machiavellian analysis of the stakes and options in Syria’s war throws up an intriguing picture how quid pro quos on offer make Syria’s war a murky issue to resolve.

While Assad and his allies are fighting for their survival, by now it is evident that the Western states will not accept an end to the war till their allies can secure a victory. Meanwhile, civil war is not a bad option for the West and Israel because it knocks out Syria as an opponent to Israel and keeps Iran under immense pressure. Hezbollah is preoccupied by Syria and not with Israel. The differences among the Muslims in the region have both deepened and sharpened thus further diminishing any possibility of mounting a challenge to Israel anytime in foreseeable future. Turkey is sucked into the Syrian crisis instead of broadening its influence in the region and other Turkic countries. And the Gulf Arabs continue to do the West’s bidding. This explains why the US, which is extensively involved both directly and through Qatar and Turkey, continues to lay down unrealistic preconditions for a negotiated settlement of the issue. The White House’s continued insistence on imposing a regime change sounds more and more like an alibi for a very long conflict. Moreover, Washington appears to have shut the door on the idea of Iran, a main player, attending Geneva talks. This again is unrealistic if the aim of negotiations is to end the fighting. So, in reality the US is enabling a massacre that it could do considerably more to end, simply because the war is becoming a quagmire for America’s enemies, Iran and Hezbollah, and is costing Russia support throughout the rest of the Arab world because of its standing by Assad’s regime. Gulf monarchies, which in peacetime tend to be troublesome American allies, have invested small fortunes on the rebel side, sending weapons and establishing exile political organizations. The more the Syrian war sucks up the attention and resources of its entire neighbourhood, the greater America’s relative influence in the Middle East. This is also the reason why Britain and France are so keen to send further weapons to the rebels. Thus Britain and France are both playing mischief to ensure that the savagery in Syria continues, as they both well know that ending the EU embargo on arms for the rebels will kill the prospects of any talks by raising the rebels’ hopes for the eventual full-blown Western military intervention a la Libya.

Though hostilities between Syria and Israel can also not be ruled out, Syria is not in a position to pose any danger to Israel. In fact, for Israel the thought of Hezbollah and Iran being sucked into a civil war with the Sunnis infused with terrorist backing is not a bad prospect – i.e., those two sects killing each other instead of uniting against Israel. The only resolution of the war that could be of interest to Israel is the emergence of a regime in Syria that is willing to cede the Golan Heights to Israel and sue for peace with it. That is not on the cards for now as the struggle is now led by Jihadists and Israel has every reason to be worried about the opposition as much as about Assad.  Hence, Israel too seems content to watch the killing continue and one doesn’t see the Arabs or Muslims getting together to stop it.

Unfortunately for Syrians, in the real world we live in, humanitarian concerns never trump nations’ blatant state and geopolitical interests. The American historian and polemicist Daniel Pipes is just being brutally candid when he writes: “Western powers should guide the conflict to stalemate by helping whichever side is losing. The danger of evil forces lessens when they make war on each other.” As long as the war continues to suit Israel and the West, no efforts for peace will gather enough motivation to end it. For anyone seeking to understand it in the historical context, “The Great Game” -a book with the tale of how superpowers coldly schemed for centuries over Central Asia in utter disregard to the consequences for the region’s citizens- tops my list of recommended reading. Similarly, in order to gain control over energy resources, every major world power (regardless of any changing of the guard) is ready to support policies and upheavals invoking misfortune for the populations in the Middle East. Euphrates’ waters have turned to blood yet again.