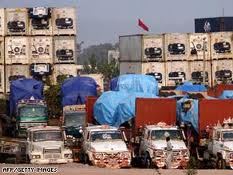 ISLAMABAD, Pakistan — American officials pressed their Pakistani counterparts on Thursday to reopen a vital supply route for American and NATO forces in Afghanistan, as relations deteriorated after the fourth strike by coalition helicopters in a week killed three members of Pakistan’s border force.

Pakistan angrily closed the crossing to protest the strikes on its side of the border, leaving American officials to use meetings and phone calls to try to soothe relations and get the route reopened. Both sides indicated that they might be able to resolve the dispute with a joint investigation.

But the border closing, and the exceptional series of strikes by piloted aircraft, as opposed to drones, signaled a general increase in tensions between Pakistan and the United States, already uncomfortable allies that are pursuing competing interests in the Afghan war.

The C.I.A. has carried out a record number of drone attacks inside Pakistan this month, and fresh reports surfaced this week of unlawful executions by the Pakistani Army in areas where it has opened operations againstTaliban forces threatening the government.

The Pakistani offensives have not extended to North Waziristan, the prime stronghold of the insurgents who infiltrate Afghanistan, a growing source of frustration for American officials who face a deadline this year to show progress in the Afghan war.

“We are clearly in the phase of our relationship where we’re trying to tell them we’re being diddled,” said Teresita C. Schaffer, director of the South Asia program at the Center for Strategic and International Studies in Washington.

But, she added: “We have been trying for a couple of years to decrease our logistical dependence on Pakistan, and have only managed to get it to 80 percent from 90 percent. So, no, we clearly don’t have anyplace else to go.”

The border closing was a clear demonstration of the leverage Pakistan holds over the American war effort. It coincided with a previously scheduled visit by the C.I.A. director,Leon E. Panetta, who met Thursday with the Pakistani military chief, Gen. Ashfaq Parvez Kayani, part of a stream of American officials who have come to alternately cajole and coerce Pakistani cooperation.

After the border closing on Thursday, Senator John Kerry, the Massachusetts Democrat who is chairman of the Senate Foreign Relations Committee, spoke with Prime MinisterYousaf Raza Gilani, trying to calm the tensions. That conversation followed a telephone call several days ago between Adm. Mike Mullen, the chairman of the Joint Chiefs of Staff, and General Kayani, about the previous strikes.

The border closing signaled the limits of Pakistan’s tolerance for intrusions on its sovereignty and for the pressure it was willing to absorb from American officials on any range of issues, despite receiving nearly $2 billion a year in military aid from Washington.

The Pakistani government indicated Thursday that the cross-border strikes were more than it could bear without protest. “We will have to see whether we are allies or enemies,” said the Pakistani interior minister, Rehman Malik.

At the same time, Pakistani officials tried to contain the damage from a video that came to the attention of American officials in recent days showing the execution of six young men, bound and blindfolded, by Pakistani Army soldiers.

Responding to questions from American officials, Pakistani officials acknowledged Thursday that the video had not been faked, as they had first contended, an American official said, and that they had identified the soldiers and would take appropriate measures.

It is in both the American and the Pakistani interests to keep the relationship going, the official said. The Pakistanis, facing economic collapse after the devastating floods of the summer, need American military aid — some $10 billion since 2001 — which could be cut off from units committing atrocities, the official said.

American commanders are eager to continue C.I.A. drone attacks in Pakistan’s tribal areas that have focused on militants from both the Taliban and Al Qaeda who cross the border to attack NATO and American troops. The Pakistani government has agreed to the American drone campaign, but could always suspend its permission or shrink the area in which the strikes are allowed.

The country is also the prime supply route for the Afghan war, a fact Pakistani and American officials are both keenly aware of. The vast majority of nonlethal supplies — water, food, vehicles — for the coalition forces in landlocked Afghanistan must travel the length of Pakistan, from the southern port of Karachi to the Afghan border, a trip of hundreds of miles.

Along that route, trucks and fuel tankers have at times been hijacked and attacked by Taliban forces. Pakistani authorities have closed the border crossings only occasionally, however, usually citing security concerns.

But they have rarely appeared to hold up American and NATO supplies in retaliation for NATO or American actions. In 2008, the Pakistanis closed the border crossing for several days after American aircraft bombed a Pakistani paramilitary post in Mohmand, another tribal area. Eleven Pakistanis were killed in the attack.

American commanders in Afghanistan, long fearful that Pakistan could choke off the supply route more permanently, have been seeking alternate paths through Central Asia, but with little success.

On Thursday, Pakistani officials gave them a glimpse of how much harder they could make the Afghan war. Trucks and oil tankers bound for coalition forces sat idle at the border post of Torkham, just north of Peshawar, with no word on when the post, one of two major land crossings to Afghanistan, would reopen, a Pakistani security official said.

American officials noted, however, that Pakistan shut only one of several supply routes to Afghanistan, a sign that the Pakistani government wanted to minimize the fallout from the episode.

“We have many different capabilities, routes, ways to resupply, so there’s no immediate impact,” Col. Dave Lapan told reporters in Washington. The blocked route, the Khyber Pass, connects the frontier city of Peshawar to Jalalabad, in eastern Afghanistan.

Colonel Lapan said American military officials were also looking into whether all procedures had been followed properly in the cross-border incidents. The Pakistani government took no similar action and made no such public protest after the earlier coalition airstrikes, even though they killed an estimated 55 people inside Pakistan.

Those strikes, on Sept. 24 and Sept. 25, took place on the border separating Khost Province in Afghanistan from North Waziristan. Coalition helicopters fired into Pakistan three times, with one helicopter briefly breaching Pakistani airspace, according to Maj. Sunset Belinsky, a NATO spokeswoman.

In the airstrike on Thursday, a NATO helicopter attacked a border post at Mandati Kandaw, a town close to Parachinar, in the Kurram tribal area, the Pakistani security official said. Three soldiers of Pakistan’s Frontier Corps were killed and three were wounded, he said.

Another border post, at Kharlachi, also in Kurram, was struck a few hours later, the official added. The two posts are about 15 miles apart and border Paktia Province, in Afghanistan.