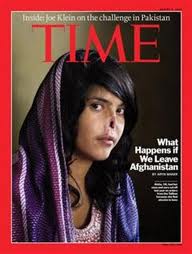 Why is there not an uproar for the woes of the daughters of Pakistan who were stoned in Swat and, presently, in Orakzai Agency? Daughters like Mukhtaran Mai, of course, are not comparable with American daughters of Pakistani origin like Aafia because, perhaps, the former are illegitimate

A cartoon is truly worth a thousand columns, protests and articles. This week, a cartoon proclaiming Faisal Shahzad to be the ‘son of Pakistan’ said it all. As expected, every visible and invisible beard in the country is falling over backwards to appear more enraged than the other over the imagined slight. Dr Aafia Siddiqui, the proclaimed daughter of Islam, the ummah and Pakistan, has already succeeded in igniting passion and indignation in the country. At the time of writing these words, the Afghan Taliban have already kidnapped a British development worker from Afghanistan as a “means of revenge for Aafia”. Calls for walks and protests have been given by parliamentarians who have already staged the first walk against the sentence. There have even been calls by some circles to sever ties with the US and NATO over the pronouncement of a sentence to this ‘daughter’. Interestingly, the MQM has declared that if they were in government, they would have severed all diplomatic relations with the US. The question that begs to be answered is: if they are not in the government, then who is? But I digress.

The newspapers are full of reports about the statements coming from Aafia’s family. Such is the self-assessed interest of the media in this issue that one of the papers ran a front page story on who Aafia’s family is talking to and who is being denied this honour. Apparently, the decision at the highest level has also been taken to send a parliamentary delegation to the US, including Dr Aafia’s sister, to lodge a protest. This is in addition to flying in her team of lawyers and her US-based brother — at the government’s expense — to Pakistan to ‘consult’ with the government over the next course of action. The government’s expense, of course, means that while there is no money for higher education, there is a lot of money to bail out non-Pakistani Muslim daughters running amuck.

Steps to bring this daughter of Islam and Pakistan back home, wherever home might be, might be necessary according to some. Perhaps, Aafia’s case should be pursued but one fails to understand why there is discrimination amongst the siblings. While the parliamentarians walk behind the opposition leader for Aafia, why do we not hear calls of “we will not rest easily” until the missing persons that have been ‘missing’ for years within Pakistan are located? Why is there not an uproar for the woes of the daughters of Pakistan who were stoned in Swat and, presently, in Orakzai Agency? Or, perhaps, the two daughters of the ummah who were buried alive in Balochistan after dogs were set after them. Daughters like Mukhtaran Mai, of course, are not comparable with American daughters of Pakistani origin like Aafia because, perhaps, the former are illegitimate.

At the time of writing these words, there are 7,000 women and children residing in 75 jails in the country. Out of these, 1,500 are in dismal conditions. According to the National Commission for the Status of Women (NCSW), 88 percent of the female prisoners are in jail only because of the ambiguities in the Zina Ordinance. However, parliamentarians do not stage walks for them, no commissions are sent anywhere in the country, no one meets their families and their ordeal is not a slap on anyone’s face simply because they are illegitimate. Legitimacy, it seems, only comes from Aafia.

A word of caution on the subject of daughters, legitimate or otherwise. Those who declare that Aafia is the daughter of Islam, Pakistan and the Muslim ummah, should remember, then, who their sons-in-law are. Aafia’s husband Mr Ammar al Baluchi is the nephew of Mr Khalid Sheikh Mohammed of 9/11 fame. We all have unsavoury uncles who get mixed up in the wrong company but investigation has revealed some roads leading to the nephew too. A detainee at the Guantanamo Bay, the son-in-law of the Muslim ummah was allegedly involved in financing the 9/11 attacks. If the trial of Aafia is “a slap on the whole Islamic world”, according to Altaf Hussain, then the trial of her husband should qualify as a slap on one side of the face at the very least.

Speaking of trials, the very characters present within the ‘Aafia mafia’, as columnist Fasi Zaka puts it, are also the ones who are sworn supporters of judicial supremacy. Food for thought for them as they endure the long wait till October 13: do they believe in the supremacy of the judiciary only in Pakistan? Dr Aafia was tried. Evidence was presented against her and the judiciary has spoken. How has this judicial decision become a fight between Islam and the West?

When will we learn? This is not a fight between Islam and the West just as militant groups do not represent anything more than the Wahabiist funded, inspired, encouraged, and promoted brand of bigotry. Just this year, a total of 9,009 civilians died in terrorist attacks, along with a total of 3,215 security personnel and 19,019 terrorists. This brings us to a total of 31,243 Pakistanis who died just this year because of the twisted worldviews that they want to impose on all of us. This is opposed to a total of 189 deaths in total in 2003, 863 in 2004, 648 in 2005, 1,471 in 2006, 3,590 in 2007, 6,715 in 2008 and 11,704 in 2009. In other words, a total of 56,431 have died in the last seven years. Yet, we declare that this war is not ours. If it was not previously, perhaps it is high time that it should be now. For the person sitting in San Francisco or Paris, militant groups and their apologists pose a terrorist threat. For us in Pakistan, it is terrorist reality.