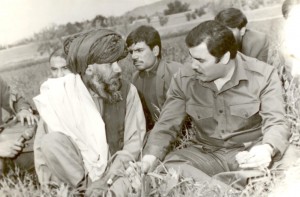 Antonio Gramsci, an Italian (1891-1937) Marxist thinker, has defined the term hegemony as “the predominance of one social class over others (e.g. bourgeois hegemony). This represents not only political and economic control, but also the ability of the dominant class to project its own way of seeing the world so that those who are subordinated by it accept it as ‘common sense’ and ‘natural’.”

This can be seen in the writings of certain “secular” Pakistani nationalists and religious multiculturalists these days, while expressing their views on Afghanistan situation they are obsessed with the dominant discourse.

Pursuing the fallacies of strategic depth the Pakistani state has been disseminating a particular rendition of Afghanistan situation through a variety of means ranging from the blatant lies of the religious right to the more elusive tactics of the allied experts, Journalists, Ex- Generals, Ex-Army Chiefs and Ex-Ambassadors strategically deployed here and there.

Among the strident series of prevarications is construction of the opinion that radicalization and Talibanisation are consequences of US intervention in the region and Taliban are an expression of Pasthun nationalist resistance.

To analyze this lets have a look to the near past. Afghanistan has a long history of foreign interventions, resistance, victories and defeats. It was a bone of contention between the Russian empire and British Raj. British administration had successfully installed a subservient regime here in the late 19th century.

The Afghan ruler Emir Abdul Rehman Khan was assisted by the British Raj in establishing his rule and received an annual subsidy of 1,850,000 rupees from the British government for some restrictions on his dealing the external matters. His son Emir Habibullah Khan also continued these relations and signed a treaty of friendship in 1905 and paying an official state visit in 1907. During the World War One he strictly maintained the country’s neutrality despite strenuous efforts by the Sultan of the Ottoman Empire, the spiritual ruler of Islam, and avoided the Pan Islamist approach.

Emir Amanullah Khan fought the British, got freedom, and started a comprehensive process of social, political and economic reforms and modernizing Afghan society and every aspect of Afghan life. He initiated a free and neutral foreign policy by starting a dialogue and friendly collaborations with the revolutionary Bolshevik leadership. The situation was alarming for the British Empire and it had started a well orchestrated defamation campaign against him, resulting in Amanullah Khan abandoning the throne and installment of a new pro British ruler in the next phase.

Another prominent figure was Bacha Khan, a Pasthun leader in the Pasthun territories of British India, who joined the mainstream Indian nationalist and secular party, the Indian National Congress, to fight for independence from British rule. He founded a social movement, the Khudai Khidmatgars – the red shirts. Bacha Khan, also called the Frontier Gandhi, too believed in nonviolence as the most effective weapon against colonial rule, and although he was a devout Muslim, he mistrusted the political influence of the mullahs, or Islamic clerics. The reforms he promoted—education, sanitation, road building—were secular.

In the first Indo-Pak War (1947), when the tribal Pashtuns were used to attack Kashmir and stories of their brutalities, rapes, loots and plunders broke out, it was Bacha Khan who regretted  and said that we have spent years to reform Pashtun socially and morally but they have created such a mess by using them in Kashmir in greed of loot and plunder, who have looted Hindus as well as Muslims and brought their women here to sell them in Bazars, and all this happened in the name of religion and the under sacred terms of Jihad. He burst out against brutalities in the name of religion.

The same mantra of perverting religious sentiments was applied again by Pakistan and his western masters in Afghanistan when the Saur Revolution challenged the status quo, the rotten and archaic tribal traditions and their guardian mullahs.

A massive process of social and economic reforms was started but the Imperialist designs, the Soviet intervention, the Pak-US-Israel proxy war with the assistance of European countries, China, Saudi Arabia and Iran. The revolution was killed (with the consent of Soviet Union) in Pakistan.

The massive propaganda for the Imperialist War in the whole world attracted Muslim youth from all over the world and they gathered on the Afghan soil under the umbrella of various Mujahideen organizations, each supported by a Muslim country for their particular brand of Islam and their interests. Even China contributed in the war with its own militant Maoist segment Shola E Javed funded heavily through Pakistan.

All the militant segments were painted as Freedom fighters and moral equivalent to the American founding fathers, as they were fighting against the Soviet invaders. But when the Soviet left, another tug of war started among these Mujahideen costing millions of lives.

These all were offered reconciliation by  Dr. Najibullah, the president of Afghanistan after Soviet exit, but he was denied and forced to abandon. And once again a sincere Afghan leader was treated in the same manner as Emir Amanullah was dealt by mullahs of his times.

Due to the imperialist war strategy in Afghanistan, which supported the non Pasthun tribes, when Taliban came to the fore they appeared as representing a pasthun cause of a sort against the Tajiks. This whole perspective was built by CNN, Fox and other major news organizations who always disguised the imperialist war in Afghanistan as an ethnic conflict between pasthun and non pasthun tribes of Afghanistan. The delusion soon elucidated when their collaboration with Pakistan security operatus revealed and later Dr. Najibullah and his brother were barbarically killed by them after capturing Kabul.

Taliban rule was a nightmare for the art, music and dance loving Pashtuns and all Afghans. As they were divested of their rich culture renditions. The centre of Afghan religious lives, the shrines were deserted over the charges of anti-sharia practices, the people were forced to pray at mosques and grow beards of a fist length – practices strongly associated with the old and aged people of above 60 or 70 years. Taliban tribal code of conduct was ravaged by the strict religious versions.

The Emirates established by Taliban came along as ultra reactionary, following the strict salafi religious traditions, hence demolishing every aspect of Afghan society, their history and cultural traditions. The gender discrimination, selling and purchasing of women as commodities (in the name of Walwar), depriving girls from schools and education, preventing women from working, free trade and smuggling of timber and narcotics, lack of justice etc, were blotted out  in Pakistan. Stories of unprecedented peace and harmony  under the Taliban rule were propagated to build up a romance.

This romance was shattered by the post 9/11 scenario, the alleged U-turn of the Pakistani state and the new phase of war and terror under the Bellum Justum to preserve the post-enlightenment Western civilization from barbarians.

But the mullahs and fanatics and their fellows, the militants, irrespective of their ethnicity, are pursuing the romance, their lost paradise, and demolishing everything coming in their way, including non combatant civilians of any ethnicity or sect, with the tagline “If you are not on our side, you are an enemy.”

The strangulation and segregation of the secular-socialist pasthun nationalism by the British administration into Afghanistan, Pakistan and Balochistan set the stage for this hogwash. The strong Salafist version is an alien idea for the Pashtuns of both sides of the Durand Line. Pasthuns have immensely suffered at the hands of these monsters. One can mention thousands of Pashtuns that have perished in suicide bombings, crossfire between state and non state militants, and hundreds of thousands of them that have been displaced.

Pashtun Nationalism has served always in the secular, progressive ideals of Emir Amanullah, Bacha Khan, Samad Khan Achakzai, Noor Muhammad Tarahkai, Dr Najibullah, Afzal Khan Lala, all the Pashtun elders, policemen and soldiers who sacrificed their lives to defend their people and the peace loving Pashtuns fighting the forces of despotism and aspiring to modernize and reform Pashtun society as per the requirements of modern age. Taliban and their apologists have tried to play pasthun nationalist card but they are not pasthun nationalist in the classic sense.

Taliban are not by any means a representation of pashtuns as what we are witnessing today in the shape of the barbaric Talibanized militant values are not of hospitality and sanctuary as well as regard for women, children and family. Killing and abduction of women and children, entering into houses to kill family members of the opponents, and attacking funerals, Mosques and Imam Bargahs has become commonplace in the Taliban culture. As a result, Islam as well as Pashtunwali have been raped by the Taliban-ISI alliance.

Today, the epicenter of Taliban has shifted to Punjab and Punjabi chauvinist (like LeT and SSP) are its allies. Here it may start appearing as “Punjabi nationalists” of a sort especially if one looks at rise of SSP in Jhang against the Seriaki-shia aristocracy. This is actually a result of a lack of genuine nationalist socialist tendency that its slogans and politics appear in an alien tendency.

While their vindicators whether religious mullahs, the illusionist leftists or the security establishment, having a stake on them will be meddling in fabrications to legitimize their acts in the name of Anti-Americanism, Anti-imperialism or Nationalism with prefixes of their choices.