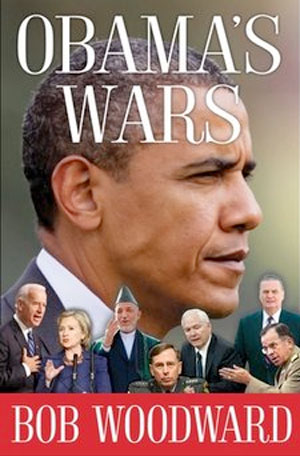 We do not know if Bob Woodward had meant to time it this way, but his latest book, Obama’s Wars, has hit the shelves exactly 14 years after Kabul fell to the Taliban, with Pakistani ‘security advisers’ present as the marauding hordes tortured, killed and mutilated the dead body of the former Afghan president, Dr Najibullah and chased the then president Burhanuddin Rabbani to Jabal-us-Siraj, outside Kabul.

After talking to 100 key individuals, sifting through countless documents and 40 major interviews including one with President Barack Obama, Woodward has once again given an insight into the workings of the White House, one that has almost become a ritual for US presidents, readers and the grand old man of the Washington press corps himself.

Impugning Woodward’s credentials as an investigative journalist, some, like Salon.com’s Christopher Hitchens and Andrew Bacevich, had called him the stars’ stenographer or the gossip chief. The fact, however, is that Woodward no longer has any pretensions to being the investigative journalist, who, along with Carl Bernstein, brought down a US presidency. He does not stake any claim to run-of-the-mill political punditry either.

Over the past three decades, Bob Woodward has evolved into a contemporary historian with an unmatched knack and resources to have power players spill their guts to him. The information he presents might not be a journalistic scoop of the time-sensitive nature that geopolitical strategists can peg their forecasts on. But it still remains invaluable to the understanding of the thought process — along with its shortcomings — in how Obama will flesh up his drawdown plan.

The aforementioned security advisers feature repeatedly in Woodward’s memo-by-memo account of the events leading up to the development of Obama’s plan for a handover to the Afghans and exiting Afghanistan. They first appear on page three of the book, when the Director of  National Intelligence, Mike McConnell, briefed Obama, two days after his election:

“It was a dishonest partner of the US in the Afghan War. ‘They are living a lie,’ McConnell had said. In exchange for reimbursements of about $ 2 billion a year from the US, Pakistan’s powerful military and its spy agency, ISI, helped the US while giving clandestine aid, weapons and money to the Afghan Taliban. They had an office of ‘hedging your bets’…It was as if there were six or seven different personalities within the ISI. The CIA exploited and bought some, but at least one section — known as Directorate S — financed and nurtured the Taliban and other terrorist groups…the Pakistani spy agency could not or would not control its own people.”

With this massive trust deficit in the foreground, Obama gave approval for a plan proposed by Joe Biden as “counter-terrorism plus”, which ultimately resulted in raising the 3,000-strong counter-terrorism pursuit teams trained to kill or capture terrorists inside Pakistan. Perhaps a coincidence that the question of hot pursuit came up this past weekend when the ISAF air strikes killed the fighters of the Haqqani network, on the Pakistani side of the Durand Line.

While NATO may have softened its position from its earlier stance of using the ‘right’ of hot pursuit, Pakistani authorities will find it increasingly difficult to defend their untenable position in the face of intense pressure and scrutiny from the US in the months leading up to the July 2011 phased withdrawal.

We are likely to see an increasing reference to the UN Security Council Resolution 1373, which states that the state’s sovereignty means that a state is duty-bound to control its territory and obligated to not allow its land to be used by non-state actors or terrorist groups to carry out attacks against its neighbours. This resolution, adopted under Chapter VII of the UN Charter and thus binding on member states, obligates them to “deny safe haven to those who finance, plan, support, or commit terrorist acts, or provide safe havens”.

This also forms the premise of what appears to be a Pakistan-specific ‘retribution’ plan, which, according to Woodward, will be triggered if there is a 9/11-like attack against the US by terrorists based or originating in Pakistan. Woodward notes: “Under this plan, the US would bomb or attack every known Al Qaeda compound or training camp in the US intelligence database…The retribution plan called for a brutal, punishing attack on at least 150 or more associated camps (in Pakistan).”

This past May, the Times Square botched terror plot nearly set the plan into motion. Leon Panetta, Lieutenant General Douglas Lute and General James Jones had conveyed in person the gravity of the situation to the Pakistani authorities on May 19, 2010 that, “if that happens, all bets are off”. At the time, the US delegation did not reveal that the response could entail bombing 150 sites!

Woodward has included in his book the memorandum dictated by Obama and circulated to the principals before his December 1, 2009 speech. The fact that no other US president before Obama has ever sent out written orders for his war plans makes this document the bedrock of his Pak-Afghan strategy. Among other things, he lists two metrics, which could alter the US policy towards Pakistan:

“1) Are there indicators that we (US) have begun to shift Pakistan’s strategic calculus and eventually end their active and passive support for extremists?

Has Pakistan approved our (US) specific request for assistance against al Qaeda and other extremists, including the Afghan Taliban and the Haqqani network?”

Based on an assessment of these metrics, the progress of Operation Dragon Strike and the outcome of the November elections in the US, Mr Obama will make critical decisions about Pakistan, Afghanistan and his political and military teams, culminating in the Afghan strategy review.

Barack Obama has made a candid observation to Woodward: the US can absorb a 9/11-like attack and come out strong. As a nation this is true for the United States. But politics in the US has recently taken a hard right turn and it would be impossible for Obama not to project hard personal and national power if certain red lines are crossed. As Woodward records, “President Obama’s only choice would be to respond.”

The US is not about to handover the keys to Kabul. Hopefully, the Pakistani establishment will reconsider its strategic calculus; living lies is incongruent with the geopolitical realities.

The writer can be reached at mazdaki@me.com