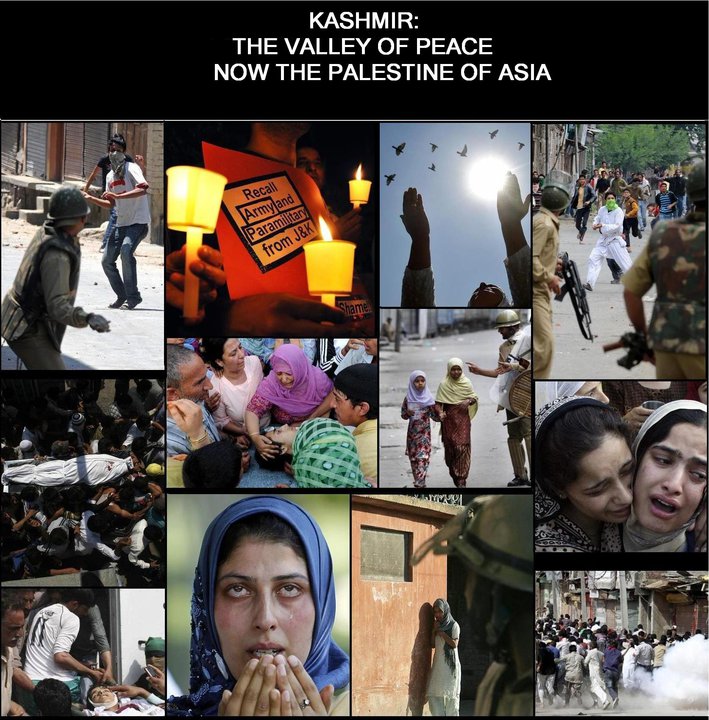 Befittingly termed once as ‘Heaven on Earth’, with millions martyred since the past 6 decades, thousands of half-widows, orphans and missing – Kashmir today is a Palestine-in-the-making of Asia.

As the Kashmir intifada continues, anyone keeping a keen eye on the serpentine course of events there is bound to be surprised as to why the coverage and attention of international media does not keep up with the importance and intensity of resistance to the Indian Occupation of the region?

[Read the precise history of the issue under the sub-title of ‘Background of the Kashmir Conflict’.]

For the past six decades, Kashmir has hung in the region as a pendulum of conflict between two countries with only one demand of the Kashmiri people, Azadi or freedom from Indian Occuption and their right to self-determination.

It has been tried to stifle this voice of theirs by bullets, lynching, rape, arrests, arson and humiliation which are what solely today’s Kashmiri youth or the ‘Sang-baaz’ (Stonepelters) have grown up knowing as gruesome child-hood memories.

But what needs to be highlighted, is how the international community is turning a deaf ear to the cries of Kashmir today when they are ringing higher than ever.

Aalaw (Meaning ‘call’ in Kashur), is a site set-up by ordinary Kashmiris to help show the ground-realities there. It has updated the list of killings in Kashmir since 11th June:

“Summer in Kashmir has been drenched in blood which witnessed killing of many civilians, mostly teenagers, allegedly in police and CRPF (Central Reserve Police Force) action mostly since June.”

113 people have been murdered brutally and one can gage if this is the case for 4 months, what really has been happening in Kashmir for the past 63 years.

The atrocities in Kashmir can also be recognized by a data included by Pakistan’s Parliamenatary Committee on Kashmir a few years back :

After much happening, recently the UN Secretary General, Ban Ki-moon evinced his cognizance of the savagery in Kashmir by hesitatingly issuing a feeble statement (calling an “immediate end to violence” and pleading for “calm and restraint by all concerned”, thus equating the people of Kashmir with their oppressors)expressing concern over the situation there but by knwoingly not addressing India which should be diretly done as expected from the Head of an organization as the United Nations.

It is pertinent to mention here that Kashmiri population are only demanding that they should be given their rights of self determination under the UN Resolution. That leaves one to wonder what the purpose of the UN is if it lacks the will to exert pressure to execute the process defined under its own resolution leave alone stopping tyranny anywhere.

This dispute is also viewed as a possible cause of a future ‘nuclear clash’ between India and Pakistan therefore making the conflict a matter of international importance.

One would concur with what Ms.Maria Sultan wrote:

“The liberation movement is often depicted as a ‘terrorist’ militancy instigated primarily by Pakistan.”

It is doubtless that the foreign media, for a long period, has portrayed the freedom struggle of Kashmir wrapped in a dirty glaze of militancy and extremism (which is exactly what the oppressors in the case: India, have shown to be which would be similar to belieiing what Israel has to say about Palestine) showing the people of Kashmir to be terrorists funded by Pakistan which is certainly irrational to say the least.

This time, the Intifida in Kashmir is not about men only but it involves women and children, armed with stones and sticks, stepping out to defy the curfew or protest.

The Sang-Baaz have taken to the streets and have become a single force mirroring the rise of the third Kashmiri generation in resistance to Indian Occupation.

Tariq Ali wrote a brilliant article ‘Not Crushed, Merely Ignored’ in July over the killings in Kashmir, him being in oblivion about them and the Foreign Media hypocrisy over it :

“….As far as I could see, none of the British daily papers or TV news bulletins had covered the stories in Kashmir; after that I rescued two emails from Kashmir informing me of the horrors from my spam box. I was truly shamed. The next day I scoured the press again. Nothing. The only story in the Guardianfrom the paper’s Delhi correspondent – a full half-page – was headlined: ‘Model’s death brings new claims of dark side to India’s fashion industry’. Accompanying the story was a fetching photograph of the ill-fated woman. The deaths of (at that point) 11 young men between the ages of 15 and 27, shot by Indian security forces in Kashmir, weren’t mentioned.

Later I discovered that a short report had appeared in the New York Times on 28 June and one the day after in the Guardian; there has been no substantial follow-up. When it comes to reporting crimes committed by states considered friendly to the West, atrocity fatigue rapidly kicks in.

An Amnesty International letter to the Indian prime minister in 2008 listed his country’s human rights abuses in Kashmir and called for an independent inquiry, claiming that ‘grave sites are believed to contain the remains of victims of unlawful killings, enforced disappearances, torture and other abuses which occurred in the context of armed conflict persisting in the state since 1989. The graves of at least 940 persons have reportedly been found in 18 villages in Uri district alone.’ 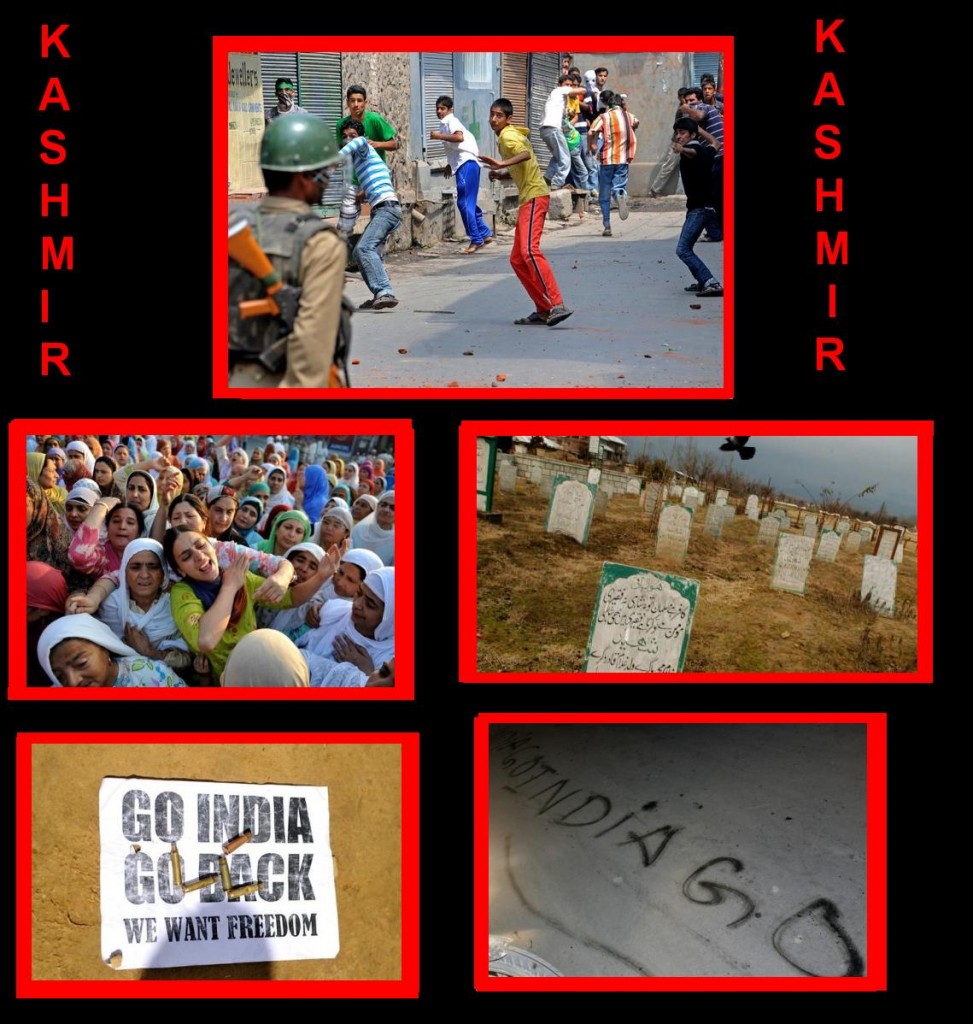 The figures provided by the IPTK are startling. It claims that the Indian military occupation of Kashmir ‘between 1989-2009 has resulted in 70,000+ deaths’. The report disputes claims that these killings are aberrations. On the contrary, they are part of the occupation process, considered as ‘acts of service’, and leading to promotion and financial reward (bounty is paid after claims made by officers are verified). In this dirty and enduring conflict, more than half a million ‘military and paramilitary personnel [more than the number of US soldiers in Iraq and Afghanistan combined] continue to act with impunity to regulate movement, law and order across Kashmir.”

M Yusuf Buch, a former adviser to the UN and former Pakistani ambassador wrote an excellent and a must-read piece on Kashmir under the heading of ‘India Fesering Wound In Kashmir’, starting from the beginning of the conflict, India’s reneges and failure to honor its pledges by Nehru, the response of the world to it to the recent-day events there :

“The Kashmir dispute has persisted for more than six decades and, to put it simply, the world has become used to it. Second, the United Nations has been marginalised during the last two decades with the consequence that the Charter is beginning to be looked upon as almost an antique. Third, callousness, if not outright cynicism, has become the reserve fund of diplomacy. A blindness to human reality is reflected in the vocabulary employed when situations of international conflict are talked about. Two adjectives used when an indirect reference (a direct reference, mind you, would be frowned upon by India) is made to Kashmir: the adjectives: ‘historical” and ‘long-standing’. Factually, the adjectives are not wrong. But they come handy because by drawing a curtain over reality, they provide a moral justification for studied inaction.

….. India stations more troops in Kashmir than the United States did or does in Iraq and Afghanistan combined. Can this situation be dismissed as ‘historical’ and ‘long-standing’?

If it is being so dismissed at present, the dismissal is aided by the language employed. We are being told of an ‘insurgency’ in Kashmir. The term may not be inaccurate but it promotes a misperception. What is going on in Kashmir is not an insurgency against an authority that was once regarded as legitimate; it is a resistance to alien military occupation.

The uprising in Kashmir has been marked more than once by the entire male population of the cities (excepting only the aged, the sick and children) coming out together in the streets to demonstrate peacefully against India’s military presence in their homeland. Could such a pointer have been mistaken, or would it have been allowed to be mistaken, far less ignored, if it had happened in a Western country?”

It is visible that India has emerged as a vibrant and growing economy in Asia, offering much to the Western countries and this ‘E’ Reason is one of th major causes behind the almost non-existent standpoint on Kashmir of the ‘Superpowers’ and those countries that have claimed to be the torch-bearers of human rights previously. India is a much-needed ally of the USA in South Asia as a counterweight against China, which leaves the sensitive issue to be either vaguely or rarely addressed as to not miff them thus acquiescing with their ‘Atoot Ang’ farce.

Written back in 2005, the article titled ‘The Atoot Ang Farce’ points out:

“India has responded to this uncontrollable situation in three ways: it has isolated the occupied state by denying access to international human rights groups and media; it is perpetrating systematic atrocities in the form of collective punishment, mass killing, mass confinement, inhuman and degrading treatment, torture, starvation, molestation and rape – over 31000 women have been either molested or raped- arson, loot and custodial killings; facts are being distorted and the freedom movement is being propagated as terrorism with support from Pakistan. Indian media has helped its government in camouflaging the reality in Kashmir by churning out lies, fabrications, excuses, blames, abuses and myths.”

If not the International Community, one expects the foreign media to stop its selective coverage and come to show Kashmir as a disputed territory.

In today’s era has become a powerful instrument for sparking awareness in minds all over the world and a catalyst for setting the stage for a change. Its role in covering the diverse incidents of cruelties were vital in making the people and Governments watching them, imbued with the feeling of their moral responsibility to adopt a firm stance on such issues.

Also the Pakistani Media needs to outgrow its immature phase of developing , kicking up an unnecessary rumpus out of every political statement, but help divert the concentration of people towards burning subjects such as that of Kashmir which is as greatly related to Pakistan as it could be. The lack of media coverage from Pakistan’s side on the Kashmir Conflict is facilitating India to brand its oppression and gross human rights violations there as an  ’internal matter.‘

Children as young as 8 are being killed in Kashmir, youthful and innocent Kashmiri girls are raped infront of their brothers and fathers yet there is no protest from the world , while when a woman is ordered to be stoned to death on the charges of adultery in Iran – even the First lady of France speaks up. People are not allowed to give blood to their injured or the dying loved ones in hospitals due to curfews. Where is the world on this? All countries that declare themselves to be champions of human rights, equality and freedom? Where are all the activists? Why this silence and bias?

Even Indian Civil Society Members have protested against the open genocide in Kashmir. Where is the Pakistani Civil Society?And it should be remembered that Kashmiris are against the Indian Government, not the people, who are in a state of amnesia regarding the promises their revered PM Nehru had made over Kashmir which they failed to fulfill. Mere rhetoric will not do, both Governments need to set Kashmir as a top priority as there can be no peace in Asia along with the establishment of its presence between the two nations, without this quagmire being solved in accordance with the aspirations of the Kashmiris.

KASHMIR BLEEDS, DOES ANYONE HEED?

Click here to post a comment
‘We need to make clear . . . the cancer is in Pakistan’ -By Bob Woodward
The dilemma of the country’s equity markets – by Ali Wahab