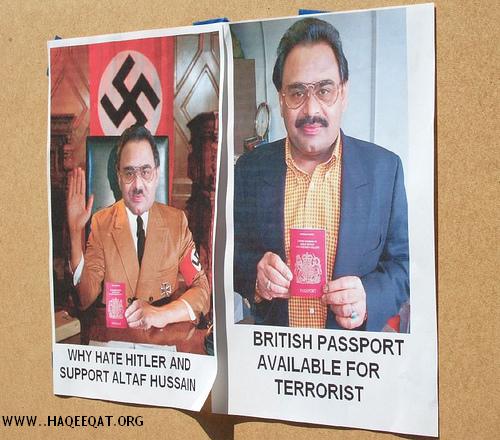 There are lots of misgivings about the MQM’s character and the way they do politics. Murderers have been awarded Governorship, Ministries and City’s Mayor post. Yesterday a letter by MQM’s chief Altaf Hussain was published on the website of MQM saying that my life is in threat and possibly I would not be alive to lead you in future so be prepared for my death. My life is in danger and those who want to Kill me belongs to International Agencies.

This Drama of MQM is over now and Altaf’s followers can’t define his revolution’s stories any more because we the Pakistanis don’t want a Murder Revolution or a Tehreek of Murderers to teach Pakistanis how to murder your own Nationals. Yes MQM is the Taliban of Karachi and I must say one more thing here, the recent drama of Altaf Hussain to threaten democratic government has given hype after his appeal for ‘Martial Law’ type intervention by patriotic Army Generals.

It is crystal clear that one who want to leave MQM will sacrifice his life for taking this decision. Amir Liaqat Hussain (former MQM’s member and Provincial Minister for Religious Affairs) is settled in Dubai and never came back to Pakistan since he resigned from MQM. What’s the reason behind it? Azeem Tariq former Chairman of MQM was mysteriously killed in his own house “on May 1, 1993.  Azeem Ahmed Tariq was assassinated, just a few days after he addressed a press conference where he made statements against Altaf. But it is still a mystery who was actually behind his killing. The three suspects, who were arrested for the murder, were also killed after they were released on bail” writes Mazher Abbas. No inquiries have been conducted or no Suo Moto from Chief Justice against MQM on their brutal act of 12th May 2007, I’dwritten an article on the same issue ‘Three years of 12th May massacre: Still CJ is sleeping – by Farhad Jarral‘ but CJ is only awake to hear cases against President Zardari and those who belongs to Pakistan Peoples Party. In Chief Justice’s dictionary the other 8000 cases including almost 4000 murder cases of MQM’s NRO beneficiaries are not important as those cases were not dictated by the Establishment Bosses.

Media voice is silent against MQM after the 12th May reporting of various channels who blamed MQM for that brutal killing of innocent masses, lawyers and political party workers. One of our editor said that my brother was contesting elections from Karachi back in 2008 elections and he registered complain to media about the rigging of MQM, unfortunately the response of Media Representatives was ‘Sirjee humai is Shehr mai zinda rehna hy’ in english ‘Sir we want to live in this city’. It’s strange that any voice raised against the MQM chief,  mysteriously killed or implicated in irregularities.

Following is an article Published today by Daily Guardian UK which point towards the involvement of MQM in Imran Farooq’s Murder:

The Scotland Yard investigation into the murder in London of the leading Pakistani politician Dr Imran Farooq has been told that rows within his own party may have led to his assassination.

Farooq, 50, was stabbed to death earlier this monthduring an attack in which he was also beaten near his home in Edgware, north London. Farooq was a senior figure in Pakistan‘s MQM (Muttahida Quami Movement) party, and was in exile in London at the time of his death. The murder is being investigated by Scotland Yard’s counter-terrorism branch because of the political dimension to the killing.

Sources say intelligence suggests his death was linked to rows within the MQM.

Farooq, once prominent in MQM, had taken a back seat. A senior Pakistani source said he may have been about to endorse or join a new party set up by Pakistan’s former military ruler, General Pervez Musharraf. The source said of the motive: “It lies within the MQM. Dr Farooq was probably going to join Musharraf.”He is vowing to leave his own London exile and return home to launch a fresh bid for power. His new party, the All Pakistan Muslim League, will launch its programme in London later this week.

Asked by the Sunday Telegraph about his reaction to Farooq’s murder, Musharraf said: “It is terrible that such an assassination could happen in a place like London.”

Farooq, who was married with two young sons, claimed UK asylum in 1999 alongside Altaf Hussain, the MQM’s leader. Hussain, who also lives in exile in London, has said “enemies of the MQM” killed Farooq and they will try to kill him. Pakistan’s media reported him as saying on Friday: “Now the enemies of the movement are after my life, but I want to tell them I am not afraid of anyone, whether it’s a superpower like the United States or its Nato allies or their Pakistani agents … I fear the Almighty Allah and will never bow down before the conspirators even if they get my British citizenship rescinded.”

Police in London are still hunting an attacker who, one witness said, appeared to be an Asian man. Analysts say the MQM has longstanding rivalries with ethnic Pashtun and Sindhi parties in Karachi. The MQM has also been riven by occasional internecine violence.

Before entering the UK, Farooq spent seven years on the run in Pakistan from criminal charges while the MQM was engaged in a violent battle for control of Karachi. He remained a key party figure. While MQM leader Hussain is protected by private guards and rarely appears in public following death threats, colleagues said Farooq never believed he was at risk and had played a smaller role in the party since the birth of his sons, now aged five and three.

Farooq was attacked on his way home from his job at a chemist’s shop. He was found near his home after neighbours witnessed what they believed was a fight. Paramedics were called but he was pronounced dead at the scene.

MQM party officials in the party’s stronghold of Karachi declared a 10-day period of mourning. Previous political killings have triggered riots and deadly clashes between rival factions. Police are keeping an open mind as to the identity of Farooq’s killer and their investigation continues.