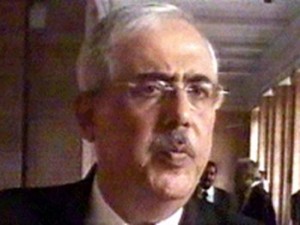 Last night I watched one time government’s defender in courts, Anwar Mansoor on Rana Mubashir’s show on NEWS ONE channel. If people have forgotten who Anwar Mansoor was, he was one of the turncoats like Dr. Shahid Masood. He held the coveted position of Attorney General of Pakistan but when he didn’t get what he wanted, he turned against the government and started yapping on all the TV outlets and Bars. Few minutes I watched the show it was like one spoon feeding other. Both were trying to be extra careful what other was saying as if it was a stage managed affair. Rana Mubashir, who is a lawyer by qualification, was complicit in giving his legal “luqmaas” to Anwar Mansoor.

Anwar Mansoor went at great lengths to explain this NRO. According to what he explained was that government didn’t defend the NRO in the court and asked it to be declared ab-initio, some legal mumbo jumbo, meaning “this never existed” or declare it null and void from the day it was implemented. Ok I agree to what Anwar Mansoor had to say. Then he went on to say that President has immunity from the day he was president and not before that. I agree to that too. He also elaborated what SC wanted government to do in Swiss cases which was only to write the letter to Swiss and asking them to withdraw the letter written by Malik Qayyum (AGP of Pakistan at the time).

This turncoat explained in detail that there never was any case by Pakistani government. Swiss had their own case against BB & Zardari and Pakistan requested to become party in the case. Not an opposing party but they joined as the plaintiffs, so in easy language the Swiss Government & Pakistan Government became partners in the case against Benazir & Zardari. After NRO, a letter was written by Malik Qayyum to withdraw from being partner was accepted and Pakistan was no more party in that case but important fact was that the case originally initiated by Swiss government, it kept proceeding the case proceeding till the final verdict was announced.

Now with the judgment of SC, Anwar Mansoor explained that SC wanted the government to write the letter to Swiss to withdraw that specific letter written by the then Attorney General only. He also said that after the withdrawal of the letter the case will be opened. (My dear legal expert AGP, how the case will be opened when it has already been decided?) Have you ever done it in this Kangaroo judicial system when the final verdict has been announced and someone files the application to be party to that case.  WAKE UP our high and might Legal experts! the case has been decide and a closed transaction now in the Swiss papers. If someone asks that AGP “if the case has already been decided in the Swiss courts how will they turn back their clocks just to satisfy the ego of Pakistani Chief Justice and media whose own credentials still wreak of foul smell”. The whole world knows that at one time this Chief Justice used to polish the boots of Musharraf.

According to Anwar Mansoor, after the letter had been written and accepted by the Swiss, the cases will stand opened and NOT PROCEEDED upon due to the fact that Zardari enjoys immunity as president, the cases will be opened as they were from the day they were closed but they will be kept open till the day Zardari’s immunity is finished and will be proceeded upon after that. Ok now according to Anwar Mansoor Sahib the fact that NRO is null and void after SC decisions and everything which was affected by NRO will be reversed back to the day NRO was issued. And if all that is reversed then we will also have to accept Musharraf back as dictator. The wholesome change that SC wants, why don’t we bring everything back to the way it was on 5th of July, 1977. This ego trip by SC and media in their hate for Zardari and love for Taliban will derail everything that has been achieved. If government which was set up under the cover of NRO brought 18th amendment why don’t we cancel that too.

My question to this high level turncoat, I agree to what you are saying. Your point makes a lot of sense and everything which was touched by NRO should be reversed back to the day NRO was implemented. Why only the Swiss cases issue is to be reversed, why not do the wholesome change and reverse back everything that was touched by NRO. The elections were held under the cloud of NRO, the new Government took oath under NRO, Musharraf left under the NRO, Newly formed government under NRO reinstated SC. Let’s send all these high court judges packing like Musharraf did. One mustn’t forget what all the judges did after reinstatement due to NRO, was to start giving relief to their new boss Nawaz Sharif. Let’s do the reversal and all the decisions of courts after reinstated by the government which was formed under NRO. I won’t be shocked if SC passed the judgments tomorrow saying that floods came under the cloud of NRO so reverse it. If past needs to be re-visited then let us do the following:

1.  proceed against you my Lord for conspiring with Musharraf to overthrow democratic government and passing illegal judgments against the constitution.

2.  Send your son to jail for defrauding Federal government and removing you from SC for using illegal means and your influence to get your son a seat in Bolan Medical college and then moving him from Baluchistan provincial service to FIA which is federal institution.

I am sure you don’t have much to say about that because it touches too close to your home. Lest start justice from your home. What about the poor man who was not given the seat in Bolan Medical College he deserved, instead your undeserving son got it because of you were the judge in Baluchistan High Court.

Mr. Anwar Mansoor, first and foremost it was a big mistake to have made you the Attorney General. Government had a short memory and forgot that you had even ditched Musharraf earlier. It is also a fact that you belong to the Oligarchy of legal system of Pakistan. Your father was a leading legal expert and you have inherited his empire. How could you side with the PPP by being the Attorney General? That would have meant you were out of the clubs that form the chattering classes of Pakistan. Zardari & PPP were corrupt before you even took their offer, so talking against them now, all you want is to improve your image and nothing else. You were interested more in cheap publicity and guess what you got that.

Click here to post a comment
Jang Group’s campaign against the PPP intensifies – Ansar Abbasi hell bent on sending the government home – by Ahmed Iqbalabadi
What is wrong with Abdul Qayyum Jatoi’s statement on judiciary and generals?