Three days before Deobandi militants’ attack on Shia Muslims in Quetta on 10 January 2013 in which at least 90 Shias (most of them Shia Hazaras but also some non-Hazara Shias) and 30 moderate Sunnis dies, Deobandi militants of Sipah Sahaba (aka Lashkar-e-Jhangvi or Ahle Sunnat Wal Jamaat) had issued a formal threat to Shia Muslim of Quetta, Balochistan which was published in Quetta’s local newspapers. Here is a clip from Quetta’s Daily Mashriq.

It may be noted that both Shia Hazara and non-Hazara Shias of Balochistan agree that they are being killed due to their faith, not ethnicity. According to a report published in The Friday Times in January 2012: “Contrary to the common perception, we are not targeted because of our ethnic origin, but because of our religious beliefs,” said Muhammad Ali, a leader of the Hazara community in Karachi. “The Shia community is being targeted and killed all over Pakistan.” (Source). However, an ethno-fascist party Hazara Democratic Party continues to obfuscate Shia genocide in ethnic terms in order to gain political mileage.

In 2011, the LeJ-ASWJ had circulated an open letter addressed to Hazaras in Quetta. Written in the Urdu language, the letter stated: 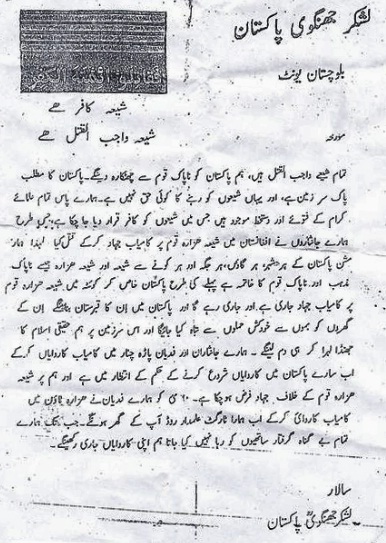 Translation of LeJ’s ultimatum distributed in Quetta:Shias are infidel and it is an Islamic duty to kill them. All Shi’ites are worthy of killing. We will rid Pakistan of the unclean community (i.e., Shia). Pakistan means land of the pure and the Shi’ites (the unclean, the impure) have no right to live in this country. We have the edict and signatures of revered scholars (i.e., Deobandi scholars including from Darul Uloom Deobandi seminary in India), declaring Shi’ites infidels. Just as our fighters have waged a successful jihad against the Shi’ite Hazaras and killed them in in Afghanistan, our mission in Pakistan is the abolition of this impure sect and its followers from every city, every village and every nook and corner of Pakistan. As we have waged successful Jihad through suicide bombing and other attacks on (Pashtun) Shias of Parachinar, we will expand it to entire Pakistan. Like in the past, our successful jihad against the Shia in Pakistan and, in particular, in Quetta, is ongoing, including against Shia Hazara, and will continue in the future. We will make Pakistan the graveyard of the Shi’ite Hazaras and their houses will be destroyed by bombs and suicide bombers. We will only rest when we will be able to fly the flag of true Islam on this land of the pure. Jihad against the Shi’ite Hazaras has now become our duty. Commander, Lashkar-e-Jhangvi Pakistan