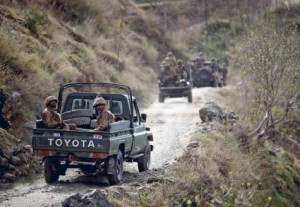 A very brutal video has recently been circulated on the internet. Taken by a cell phone camera it shows soldiers in Pakistan army uniform brutally killing a number of teenaged boys by first shooting them in a firing squad and then shooting the survivors at close range. Please note that this video is very graphic and watch it at your own discretion:

(Advice: Better save these clips on your computer through this link):

The question is – where is the media? While the media is eager to jump at the slightest hint of a scandal when it concerns politicians there seems to be a complete silence on the part of the media in covering this issue. Both the local and foreign media are silent on this shocking video. It should be noted that HRCP and HRW have been warning, for over a year, of the reports of extra-judicial killings in Swat following the military operation there. According to HRW in a report published in July 2010 the army had carried out 238 extra-judicial killings in Swat. According to Maj. Gen. Athar Abbas at the time:

“We will have to look at the charges before we come out with a specific response,” he told the BBC. “But we maintain that the army has never been involved in any such act.”

Now there seems to be video evidence to document these claims. So far the only response from the military (or its supporters) has been to remove the videos from websites like Youtube as fast as they can be uploaded. They seem to think that by removing instances of the video from the public sphere they can make the issue go away. In this they are ably aided by the media which willingly maintains a wall of silence on all matters concerning military misconduct, either out of fear or complicity.

Here is an earlier account recorded by HRW from a local resident of Swat of an extra judicial killing which bears a great deal of similarity to the events shown in the video above:

Another resident told Human Rights Watch: “On February 16, 2010, the army shot all four dead in the area of the Grid Station in the town. We heard the shots that killed these individuals. The corpses of Mullah Banorey and Mullah Shanko were tied behind military vehicles and dragged publicly in the areas of Char Bagh, Bagh Dheri, and Matta as warning. The people were encouraged to spit at and throw garbage on the bodies of the two dead Taliban commanders, who were feared and hated. But the entire local population knew that Saleem and Murad were innocent. Why did the army kill them?”

Click here to post a comment
Pakistan Peoples Party on the crossroads – by An LUBP Visitor
Our expats: The Pakistanis living abroad, Part 2 – by Fawad Manzoor