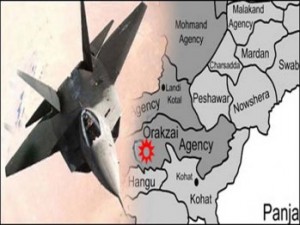 A potentially dangerous development is afoot in Orakzai and no one in Pakistan seems to care. The military authorities and the Orakzai political agent (PA) have ordered the internally displaced persons (IDP) from the Lower Orakzai to go back to their region. The authorities claim that their areas have been ‘cleared’ of the Taliban. Many IDPs from Utman Khel, Mando Khel, Syed Khalil Baba, Astori Khel have gone back. The IDPs from the Bezot area are going back this week. While the IDPs from Feroz Khel, Mishti Khel and Shikhan have also been ordered to be prepared for return in March.

The returning IDPs would be responsible for the security in their villages. They would have to make supervisory committees to report any suspicious individuals to the authorities. The army would be responsible for security on the surrounding mountains. The army is holding positions on the mountains. The returning IDPs, who have their houses destroyed in the military operation, would be given tents.

These people were first rendered homeless and then abandoned by the state in pursuit of its strategic depth. These poorest of the poor IDPs have been living in the most pathetic conditions in cities and towns of Khyber Pakhtunkhwa. Many of them have not been registered as IDPs, and so they could not even obtain the meagre help that the Red Cross or other international aid agencies provide. Some of them were literally living on roads. Some were living in the Afghan refugee camps.

Most of those who have the means to survive as IDPs in Khyber Pakhtunkhwa are not going back. They do not trust the claims of the military authorities regarding security in their native villages. The military have not killed even a signal Taliban commander. As long as the commanders like Nabi Mullah, Aslam Farooq, Tufan Mullah and Hakeemullah Mehsud are alive and well, there can never be permanent peace in Orakzai. The IDPs ask why these commanders are still at large and how could there be peace in Orakzai without the commanders’ elimination. The authorities are tight-lipped about this most important issue. They do not provide any guarantees for security in the area.

Moreover, upper Orakzai is still mainly under the control of the Taliban. The army has not even reached Mamozai, the centre of the Orakzai Taliban. Furthermore, sporadic acts of terrorism are still occurring in the ‘cleared’ areas. Only during the last week, a blast damaged the house of a local tribal leader in Feroz Khel.

In this situation all those IDPs who could barely afford to survive outside Orakzai would not return. However, they are afraid of the possibility of a forced repatriation. They are afraid that the army would put pressure on them through the political agent of Orakzai to return to boast to the media, both national and international, that like the Swat IDPs, the Orakzai IDPs have also been sent back. They are apprehensive that the authorities have all the power to bully the IDPs, because the tribesmen and women are not entitled to any human rights under the Constitution of Pakistan. Orakzai, like most parts of Federally Administered Tribal Areas (FATA), is closed for independent journalistic investigation. The outside world and even wider society in Pakistan would never come to know about the ground security situation in the area.

The returning Orakzai IDPs might be trapped in the same vicious circle in which the Mehsud IDPs have already been entangled. Several times the army sent the Mehsuds back to their native area. Each time they suffered more violence at the hands of both the Taliban and the military. The latest position is that the Mehsud tribe is resisting the army’s pressure to go back. In a recent meeting between the Mehsud tribal leaders and the military authorities in Tank the latter threatened the former to go back to South Waziristan supposedly cleared by the army and make lashkars ready to fight the Taliban in the future. FATA tribal leaders have never been known for asking tough questions from the authorities, thanks to the brutal Frontier Crimes Regulation (FCR). But still at least one Mehsud tribal leader confronted the military authorities head on. He categorically told that the Mehsud tribe is not convinced that the intelligence agencies have changed their mind and now consider the Taliban as enemies of the state.

Actually, the Mehsud tribe is afraid that they are being trapped by the authorities, i.e. all internally displaced tribesmen and women who have spoken against the Taliban would be targeted and killed upon their return and others would be overpowered by the Taliban in collusion with the intelligence agencies. The net result would be that the Mehsuds would have to become IDPs once more. Waziristan would continue to be unstable and the game of the intelligence agencies in collusion with the Islamists would go on.

The Orakzai IDPs’ apprehension is that a similar stage might be prepared through the return of the IDPs in Orakzai. The Taliban would slaughter the supervisory committees constituted by the returning IDPs. The army on the mountains would ignore the carnage. The Taliban would overpower the returned IDPs. Terrorism and harassment would be the order of the day. Orakzai would continue to be marred with violence. Amid the violence, the Taliban and the intelligence agencies would pursue their strategic depth goals in Afghanistan. Helpless civilians of Orakzai would pay with their blood.

The question is: who in Pakistan has the power to grill the military generals over their constant failure to kill or arrest the Taliban commanders from FATA? Who has the audacity to make the generals provide some reliable security mechanism for the returning IDPs in their native areas?