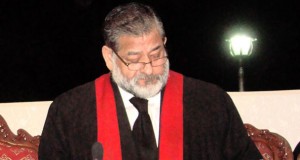 In the Dawn of September 24, 2010, Zulqernain Tahir has reported on the the suspects in the plot against Justice Khwaja Sharif. The news report begins with the ISI and Punjab police terming the Special Branch report to be “false and baseless” claiming that PPP leaders had hatched a plot to assassinate Justice Sharif.

In this report PML-N’s Pervaiz Rasheed has admitted that report was leaked. Earlier on the PML-N had denied doing so. It also confirms our assertion of the nexus between the PML-N and Ansar Abbasi and his gang. I was surprised to hear Ansar Abbasi say on

Thinking objectively, what has been achieved with this story? Justice Sharif is well and alive and we pray for his long life. The PPP stalwarts have been alleged to be killers and a lot of time and energy was wasted to defend these allegations.

Our Media needs to grow up and elements like Ansar Abbasi need to be tamed down by their editorial boards!

“We have found no connection whatsoever of three PPP men with the alleged murder plot of the LHC CJ,” Lahore police chief Aslam Tareen told Dawn on Thursday.

“The contents of the special branch’s report could not be verified after a thorough investigation. There is no truth in it.

“All eight suspects arrested after their names were mentioned in the report have been set free for want of evidence against them,” he said.

Mr Tareen said the report had been submitted to the quarters concerned and security of the chief justice had been beefed up.

“The findings of the ISI also confirm those of ours,” he revealed. The report was sent to Inter-Services Intelligence agency and police for verification after its authenticity was questioned by the Pakistan People’s Party.

However, an intelligence agency official said the question now arose if the Punjab government would initiate an investigation to ascertain who was behind the preparation of the ‘fake’ document and its ‘deliberate’ leakage.

Expressing regrets over a trend of using names of security agencies for political gains, he said: “The authenticity of any future reports by the special branch will now be suspicious.” The report, which did not have the signature of any official concerned, had alleged that a federal government nominee in Punjab, a federal minister and a provincial PPP office-bearer were involved in preparing a plot to assassinate the chief justice by hiring hardened criminals.

The report was prepared on Aug 2 and given to a section of the media in September.

Talking to Dawn, Col (retd) Ehsanul Haq, who was the special branch’s chief at the time, said that neither he nor his subordinates had authored the report.

However, the Lahore police chief claimed he had admitted that he had a source report about the plot.

Governor Salmaan Taseer has alleged that the chief minister’s private secretary Tauqeer Shah had leaked the ‘unauthenticated’ report to the media.

He said Chief Minister Shahbaz Sharif should explain whether the move to implicate PPP leaders in the conspiracy was his or his team’s idea.

PML-N spokesman Senator Pervaiz Rashid said the chief minister had forwarded the report to the ISI for verifying its authenticity.

He said Mr Shah had nothing to do with the report.

“It was leaked to the media because it was a very serious matter. Making such information public thwarts such plans,” he said.