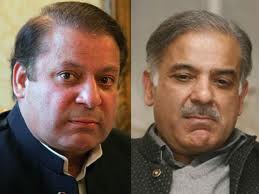 The sad truth is that Sharif brothers are playing politics with the lives of flood victims and also mobilizing & leading vicious ‘change campaign’ against civilian elected government. CH Pervaiz Elahi, senior central leader of Pakistan Muslim League, has lashed out at Shahbaz Sharif’s “flood politics” and dubbed it as a pack of lies. He said the Punjab government first due to its criminal negligence allowed the floods to cause an unprecedented devastation in the province and now instead of addressing the genuine needs of the flood victims, it was busy trying to divert public attention from real issues. Federal Minster for Law and Parliamentary Affairs Babar Awan has said it was really strange that in three provinces, efforts were underway to save the population from flood, but in the fourth (Punjab), ‘flood politics’ was being played. Even Prime Minister Yousaf Raza Gilani had criticized Shahbaz for making unreasonable financial demands from the federal government.
A matter of fact, Pakistan Muslim League-Nawaz (PML-N) has failed to govern Punjab, it has a record of failures. It has ruined the provincial finance and now province has been turned into a bankrupt federating unit all because of lack of vision, egotist policies and sheer incapability of Chief Minister Shahbaz Sharif. In order to hide the `disastrously’ bad performance of his government especially in flooding, he is pointing the finger at federal government(there are a number of good things which have been undertaken by the federal government despite all odds). Opponent parties have accused the PML-N of using the federal government’s lacking as an alibi for its own failure to come to the aid of flood-survivors, they have charged Sharif with practicing “flood politics,” including denying aid to people from areas where they do not have political support.
The Punjab government has done next to nothing to provide relief to the millions of flood-affected Pakistanis. Instead, Sharif brothers and  other PML-N leaders took every opportunity to hit out at the federal government’s deficiency to carry out the rehabilitation work(due to various reasons). PML-N’s hawkish attitude towards Pakistan Peoples Party:  it’s provincial law minister Punjab Rana Sanaullah and Punjab government’s spokesperson Pervaz Rasheed were also in the forefront of those criticizing the PPP led government. PMLN led opposition’s ‘propaganda campaign’ is not only hindering the flow of foreign assistance to the country but also injecting chaos and uncertainty.
The PML-N, famously known as the G.T road  party, is once again playing the ethnic card and using undemocratic forces for Mian sahib’s “premiership’ as it has repeatedly done in the past.  It’s leadership accusing the Pakistan People’s Party-led central government of monopolising relief funds, claiming that this represents an attack on the Punjab.
Mian Nawaz Sharif had initially called for the establishment of a national flood relief committee under the control of “non-governmental personalities”. This was opposed by the three other provincial governments. They insisted that relief work be under the control of the federal government, this development annoyed Punjab based party’s chief boss. The PML-N has nonetheless continued to insist that the provincial governments play a key role in relief operations.At the CCI meeting, Prime Minister Gilani promised that there would be no discrimination in the distribution of relief funds. “Every penny received and each item collected would be distributed to the provinces by the federal government in a transparent, just, and equitable manner,” he claimed.
Jaamshaid Dasti, a Pakistan People’s Party Member of the National Assembly from Muzaffargarh charges that the PML (N) aligned landlords “put pressure on the Irrigation Secretary and the District Coordination Officer” not to open the barrage to the flood basin so as to spare their crops.
Pakistan Peoples party has serious reservations about the breach of dyke, as Muzaffargarh was a stronghold of his party and they could not remain silent in this situation. PML-Q opposition leader in the Punjab Assembly Chaudhry Zaheerudin had also accused the Punjab government of breaching the dyke, as a result of which Muzaffargarh had been inundated. He alleged the government devastated a large area only to save the hometown of its provincial leadership.
PPP leadership demanded the Punjab government to probe the allegations raised by the PML-Q leaders about late opening of the Taunsa Barrage gates, which inundated dozens of villages in southern Punjab. He alleged that thousands of people had been displaced due to unwise acts of the provincial government.
The Muzaffargarh District in south Punjab would largely have escaped flooding if influential politicians, acting in their own interests, had not violated flood management guidelines contends a report published in the September 10 issue of the Christian Science Monitor.
According to the Christian Science Monitor report, many officials term the Muzaffargarh flood “man-made.” However, for fear of reprisals only a few would be quoted by name. “Most of the flood damage would simply not have occurred,” said a senior town official, “if the right side of the dam had been breached (in) time.”
Rather than channelling the surging Indus waters into a previously designated flood area on the right river-bank and thereby protecting heavily-populated Muzaffargarh, irrigation officials breached dyes on the left. This resulted in massive flooding in Muzaffargarh that led to the deaths of more than 50 people, displaced more than 1.5 million, and destroyed more than 300 schools.
Reportedly the reason officials chose not to divert the water into the designated flood basin was that it contained fields of cotton and sugar cane illegally sown by two powerful feudal families with close connections to Punjab’s PML (N) provincial government.
A clear-cut ‘no-cooperation’ message by ally and the arch rival Nawaz Sharif has reportedly panicked Prime Minister Yousuf Raza Gilani, making him publicly talk of ‘conspiracies’ being hatched against his government. A source informed Dawn on Tuesday that Nawaz Sharif’s message had panicked the prime minister as it was indicative of some ‘serious move’ to send his government packing. Sharif brothers expert in riding two horses at a time

A clear-cut ‘no-cooperation’ message by ally and the arch rival Nawaz Sharif has reportedly panicked Prime Minister Yousuf Raza Gilani, making him publicly talk of ‘conspiracies’ being hatched against his government. A source informed “Dawn” on Tuesday that Nawaz Sharif’s message had panicked the prime minister as it was indicative of some ‘serious move’ to send his government packing. Sharif brothers expert in riding two horses [govt & opposition] at a time, enjoying all government’s parks and privileges in Punjab and not only criticizing PPP led government in center-but also mobilizing  ‘change campaign’ and trying utmost to derail democracy once again.

Raza Rumi rightly says that politics is making us lose our focus on the 20 million plus flood-affectees who have lost their livelihoods and face a grave public health threat. At this stage we need a consensus between all players to work towards relief and reconstruction. Political instability will accelerate the economic meltdown that has started and lead us to the brink of another disaster. He writes in his article “Flood politics at its worst”,

Flood relief is being used by some as an opportunity to orchestrate political upheaval. Sections of the media are drumming up the partisan politics of a dangerous kind by involving the thorny issue of civil-military relations and the trite-but- failed recipe that the country should revert to authoritarianism whenever a crisis erupts.
Some TV anchors have been overtly suggesting that the military is saving the country at this juncture when the “venal” politicians are staging VVIP visits and not giving any relief. In one TV show, an estranged senator of the ruling party called for martial law. There is now a clear effort to create a duality — that of the military versus the civilian government.
Another charge against the federal government is that of Pakistan’s credibility deficit. The prime cause for this, according to the TV sages, is the president’s tainted persona. The irresponsible statements of the United Nations in terms of Pakistan’s ‘image’ have not helped either. One wonders, in fact, just what evidence the UN has in its possession to reach such a conclusion. Are dozens of developing countries not in the same league? Are corruption and systemic leakages strictly ‘Pakistani’ problems? The UN may investigate this issue and take corrective steps lest it be seen as supporting the forces pitted against democracy in Pakistan.