To denigrate Baluchistan’s resistance movements and to present a picture where the blame of all Baluch sufferings go to foreign elements even though the real culprits are the Punjabi elite and the Pakistan army for their military operations in that region.

Thus with the help of false theories, Pakistani Rulers have been successful in diverting public attention more towards the so called Israeli/American agenda in Baluchistan as compared to the real issues.

The strategy employed here to achieve this objective by the army and its media agents is to present a picture in the Pakistani public that the army is doing all it can to take actions against certain contentious issues in Pakistan but it’s the civilian government that is acting as an impediment in its quest.

For example: Refer to this brief video where ISPR (ISI’s Public Relations) is giving this statement in the press conference that the Pakistan army has captured Indian weapons in Swat and all necessary proof regarding India’s complicity has been send to the civilian government (Foreign Office) and now it’s the government’s job to take this with India.

In other words the ISPR that represents Pakistan army is giving this impression that the military has fully done its job of collecting evidence against India and now it’s the turn of the civilian government to raise this issue with India.

Statements like these then are heavily exploited by army’s media agents (Zaid Hamid and Ahmed Qureshi in particular) to further justify their claim that the present civilian government is not taking these issues with India and hence is working with the CIA and RAW and the only way to bring stability in Pakistan and to fight Indian interference is to willingly accept an army rule.

Similar strategy is manifested on the issue of drone attacks in Pakistan (Widely condemned by the majority of population) and is used not only by the army sponsored media agents but also by the opposition political parties to exploit public support against their rivals.

Officially, both Pakistan army and civilian government maintain that they are not complicit in drone attacks and there is neither any secret agreement between them and the US. But numerous reports have indicated that both the government and the army are involved in not only allowing the US to use the Shamsi airfield in Baluchistan but also to provide them with necessary intelligence in relation to the locations of the targets.

The dichotomy over here is, that the same army expressed its criticism on Kerry Lugar bill (an aid agreement by U.S. directing more aid towards civilians rather then Military) and choose to stay dead silent on drone attacks.

On similar lines, why Pakistan army is not in a position to hold an emergency meeting (at least) to protest against Drones?

Why a conspiracy theory created to portray Pakistani Taliban as “Foreign Agents”?

This is because: To defend the image of pro Pakistan Militants or jihadists and Pakistan Army.

Pakistan formed the Afghan Taliban after U.S. conveniently left Afghanistan in dilapidated condition. In order to protect its regional rivalry with India (that was supporting Northern Alliance), Pakistan has supported the Taliban since the beginning to influence Afghanistan’s domestic and foreign policies. While the Taliban continued to pummel Afghani women and children as well as men, the women elite of Pakistan continued to party away late into the nights with their partners… life was lavish. Most of the masses in Pakistan had no idea about the existence of Taliban and their brutal tactics which was to spill onto their lives a few years later.

However, things dramatically changed after 9/11 with U.S.’s War on Terror. Pakistan was forced to rethink its policy towards the Taliban due to American pressure and strategic reasons, and a general consensus against them was formed the world over. The Taliban were brought to the forefront and their dirty deeds were exposed through the internet and the media.

At the same time, under Musharraf, Pakistani media became relatively free which led to the scrutiny of Pakistan’s relations with the Taliban. Images of public beatings of women, killings and executions in soccer grounds were all over TV channels. This contributed towards forming a negative image of the Taliban among the Pakistani people. (Except the conservatives, extremists and political parties such as Jamait e Islami)

Specifically after the TV Boom in Pakistan which also happened simultaneously, the new free media and the newly hosted Talk Shows exposed the role of the Military in the formation of the Taliban or militants through prominent politicians who came up and spoke out. Military rule came under fire as Pakistan’s history of exploitative politics and ISI’s role in it came to light through critics in talk shows and electronic media.

Thus a negative perception of the military was also created.

By 2007 Pakistan came under the strain of excessive bombings by a newly formed group known as Pakistani Taliban. This group was formed on the same ideological lines as the Afghan Taliban i.e. to enforce puritanical Sharia in Pakistan and to fight against any occupying forces. However, it differs operationally from Afghan Taliban as the latter is fighting in Afghanistan against U.S. and NATO forces and the former is in war against Pakistan who is supporting the occupying forces. They are both controlled by Al-Qaida and are mostly collaborate together. The graph below shows the relationship between these three players (Afghan Taliban, Pakistan Taliban & Al Qaeda) and how they are destabilizing  Pakistan and Afghanistan. 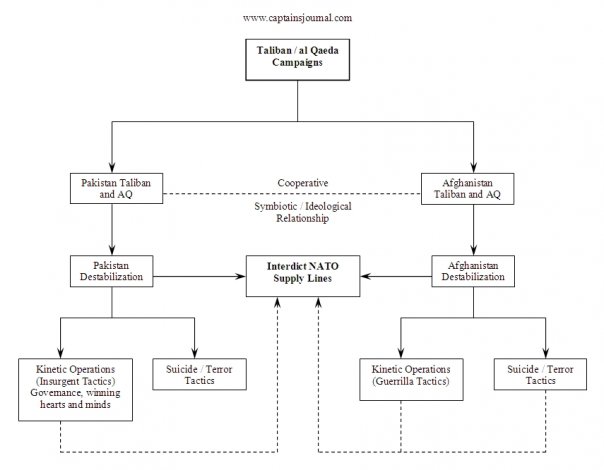 Soon after the suicide bombings in 2007, TTP (Pakistani Taliban) openly started to claim responsibility for the attacks and got significant coverage by the electronic media. In these circumstances it became increasingly difficult for the extremists and the conspiracy theorists to openly defend the Islamist militant organizations and to simultaneously have the Afghan Taliban and Kashmiri militants as a regional lever for control. Since the Pakistani Taliban were openly claiming on television to have carried out suicide bombings in Pakistan in the name of Jihad, ISI and its Islamist allies became increasingly worried as this was tainting the image of “mujahids” (Islamic Fighters), Jihad (a motivational weapon of Army) and spreading the perception that the militants were retaliating against Pakistan because of the indiscriminate bombings by the Pakistani army in tribal areas.

In addition to this, the Lawyers Movement added fuel to the fire and acted as a catalyst in forming a negative image of the military. The Military however had to come up with a plan which was politically safe in the short run and which also served their interests in the long run.

To counter all this, Pakistan army, Islamists, and allied conspiracy theorists devised a plan to launch a conspiracy theory that would easily blame all the attacks in Pakistan on India, Israel and the U.S. Hence TTP and any other affiliated militant group that was attacking Pakistan was then tagged by these conspiracy theorists as Indian or American agents working in disguise as Taliban to malign the reputation of  the “Taliban” and jihad in particular.

The Pakistan Army did not stop here however. They launched a proponent agent in the public: someone who would act as a defender as well as a promoter. Right about that time, and apparently without any associations to the army, Zaid Hamid appeared on the horizon and took two stances that the army was in dire need of. In order to rally support for his perspective, he gave his ideas a religious aspect insofar as glorification of the army was concerned. Briefly mentioned, his views are firstly that the army is sacred and can do no wrong, secondly, that our army is destined to overpower the whole world, and lastly, Ghazwa-e-hind i.e. we have to defeat India and we are religiously destined to do so one day.

To boost the morale of the armed forces and the general population when the army sees a need for any military operation or intervention.

Before any Military operation, it is a tendency of the army to label its adversaries as Indians or Zionist agents. This is because the army is predominantly trained and indoctrinated to fight against the Hindus (“infidels Indians”).

A common exploitative tactic is to give a conflict a religious context e.g. by presenting the ‘enemy’ as enemies of Islam. Before the 1971 operation for East Pakistan (operation searchlight) Bengalese were targeted by issuances of fatwas for their ‘infidel activities’, thus painting the Bengalese as unfaithful and conspirators against Islam. This ideological manipulation influences the public sentiment by projecting a unislamic and imperialist image of foreign country/peoples. Prejudiced and censored history also makes the public vulnerable, making it easy to get their support for a military operation. The 1992 operation against MQM is a textbook case. Members of the MQM were portrayed as traitors who were secretly plotting to create a separate state with the help of the Indians. Similar strategy is employed in Swat and Waziristan operations where with the help of conspiracy theorists such as Zaid Hamid, the army is successful in gaining public support and motivation for troops.