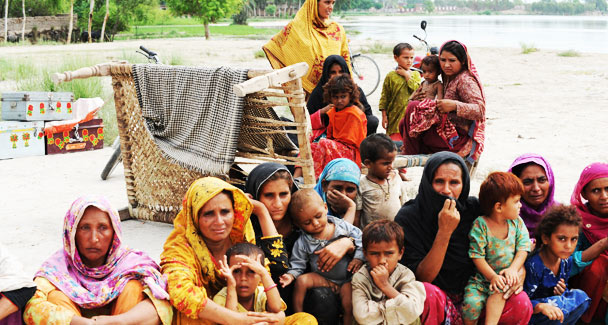 The unprecedented monsoon clouds which seemed to have become static over Balochistan created unparalleled havoc with lives, properties and livestock. Oddly the droughts here are equally severe but they certainly are not because of the US program HAARP with which it is alleged they can control weather patterns. A lot of people believe that this program was responsible for the rains and consequent destruction.

Older people say that whenever there is a late monsoon which begins around the end of July is always severe and tends to continue into September as well. Why this happens is for scientists to discover if it is El Nino or some other phenomena the people on the ground who suffered only know that the heavens opened up and forgot to close.

The rains were incessant and long with very little respite and this created conditions for floods. The rains in mountainous areas of Balochistan do create havoc but not to the extent that this water then creates when torrents reach the flat lands where towns and villages are located. The first to be affected were Talli and Lehri at the foothills of Marri area. It had rained heavily and continuously in Marri area and around Barkhan on July 22 and 23 and these became a torrent and consequently devastated Barkhan, Talli and Lehri.

There were more than 50 deaths in these areas as many people were caught up in flash floods perished some died due to collapse of houses which are usually mud and stone structures. You have to see a mountain torrent’s fury to believe it because it catches you unaware and unsuspecting. The sound is frightening but the real danger comes from the abruptness of its arrival and the instant rise in water levels.

These torrents uprooted life in Sibi, Talli, Lehri and Barkhan towns. The rail traffic between Jacobabad and Quetta was suspended due to track damage. Some 80,000 people were affected and the relief agency had only a single helicopter to cope with a disaster of this magnitude. Around 13 power pylons had been washed away or completely damaged in Kohlu and Barkhan, plunging the areas into complete darkness. In Kohlu tehsil alone 30 villages were affected by flash floods and over 20,000 people were rendered homeless.

A lot of people from surrounding areas of Kohlu are already internally displaced people and these persons will be displaced once more by these rains adding more misery to their already fragile lives.

In Talli, at Marri area foothills, devastation was particularly severe where around 4,000 people were displaced and with everything destroyed and no relief in sight the people there protested by burning tyres and chanting slogans. The people affected by the floods have been in dire straits and many have sought refuge with friends and relatives unaffected by the rains and floods.

The sufferings of the people in Balochistan were compounded when the mighty Indus on its way towards Arabian Sea reached Sukkur and there the Tori Bund (embankment) was breached some say intentionally. Former Prime Minister Zafarullah Khan Jamali alleges that a government minister Ejaz Jakhrani was responsible, and some say due to natural erosion but this water then rushed to Qamber and Shahdadkot like a new river inundating them and then moving on to Jaffarabad. This breach they say was made to save the US Airbase at Jacobabad.

Ironically, a top health official disclosed that, this base was beyond limits for the Pakistanis or foreign relief agencies and couldn’t be used for relief purposes though the next day a vice air marshal took media people there to prove otherwise but the hard fact was there because they had to make Sibi airport operational for relief operations.

The displaced people suffer from all sorts of problems which range from lack of shelter, food and drinking water to water borne disease and extreme lack of privacy. These people are very sensitive about their privacy and find it very difficult to live out in the open in full glare of people and at times visiting VIPs whose visits create more problems than they solve. The people have to fend on their own and it is for that reason they those can go their friends and families at other places to avoid the humiliation of living on hand-outs distributed at times by arrogant government servants.

The problems of the flood affected people of Balochistan are more severe and less attended to. The government allows even the militant organisations to do relief work in other places but if a relief organisation wants to help the people in Balochistan they have get a no-objection certificate from the National Disaster Management Authority. This they do on excuse of security risks there. The real reason is to ensure that the Baloch are deprived of much needed help.

The rehabilitation is going to be very difficult because for one the amount offered (Rs. 20,000) is insufficient and there is no guarantee that it will reach those affected. The water in Jaffarabad and other places is going to take a long time to dry out and this will keep people displaced for long and increase the chances of diseases. The neglect in Balochistan is willful while in other places the neglect is due to the proverbial ineptness of the Pakistani state and the corruption that infects every department and every institution.

The water in the Jaffarabad district and other affected plain districts is not expected to recede anytime soon. This leads to collapse of houses and if they do not collapse then other problems like destruction of things that were abandoned there due to the sudden flooding. The meagre sum announced would hardly suffice for a single room. The people have started rebuilding in places that they can on their own because they do not expect much or timely help.

The governments of different provinces have started accusing others of presenting inflated figures in hope of getting more aid. It is not the people but it is the money they are interested in. Even Prime Minister Yousaf Raza Gilani was criticising the money being handed over to the NGO’s which he implied are corrupt. There is very little concern about the suffering of people and more worry about the amount that they would receive.

To top this there are reports of nepotism being practiced by sending relief goods to those preferred by the ministers and other influential persons. The sufferings were already immense but these factors have compounded them.

The real inundation: Now it is more than a month after the flooding disaster, the real inundation is creeping up is new deluge and the humanitarian crisis continues, with clean water and medical aid desperately needed, Kits include the very basics required to survive in these extreme conditions, things like buckets, soap, laundry soap, tooth brush, jerry cans, hygiene items for women, towel, plastic mugs, kitchen utensils, plastic sheeting, tents and mattress as well as water purification tablets access to clean water, food and medical facilities.

People are dying on a daily basis in the flood affected areas had been suffering from gastroenteritis and other waterborne diseases like diarrhea, most vulnerable are children, situation is so acute the only Kohlu district more than 325 people were suffering severe septicaemia, due to standing water there is sharp increase in the most common diseases creeping out like gastro, skin and eye infections and then malaria, typhoid fever and  these people, certainly vulnerable to other disasters and stresses such as HIV/AIDS.

Hungry and desperate: The fight for survival flood victims fight over handouts, the affected often complain aid agencies distribute food aid in disorderly manner sparking fights among those gathered to collect them, hunger and anger are feeding a growing sense of anarchy as the flood victims fight for pieces of dry bread, severely malnourished children and elders are found throughout calamity hit areas.

People simply have no where to sleep after all stress and strain having lost everything so suddenly accumulated and built with sweat and tears throughout life itself is acute physiological trauma and here we see government hypocrisy and playing with people’s emotions where ever these so called government bigwigs visited for their photo sessions empty artificial helping camps were installed which was widely reported in press.

I was stunned beyond my understanding the complete helplessness by Baloch political elite for their silence and non-existence during such calamities otherwise during elections you find caravans of land cruisers and helix pickups relays moving around to get elected where are all these nationalists in time of peoples need?  I saw no public statement or cry for help because their own homes are dry family safe and elections are still far. The  Baloch Diaspora also did nothing and sitting with deafening silence shame upon them.

Balochistan which is rich in mineral wealth is poor because of Islamabad’s [ Images ] mistreatment and exploitation have suffered its worst disaster. According to the Balochistan government the losses to infrastructure the housing and cultivation lands are Rs 1 trillion and the human losses cannot be counted in rupees. Who will finance these losses only God knows. The effect will remain and rebuilding will take years.

The problems of Baloch are certainly not going to end with the policy that the governments here have adopted since 1947. The alienation keeps on increasing and the youth keeps joining the ranks of fighters. The government tries to find excuses for the resentment among Baloch though it is itself responsible for the problem. The callous and heartless approach of the central government and the continued atrocities by the law enforcement agencies are all adding up as the proverbial straw on camel’s back, what is going to prove to be the last straw is anybody’s guess or has the last straw already been placed in form of this apathy.

Dr Jumma Khan Marri is president of the Baloch Unity Organisation who, while living in exile in Moscow.