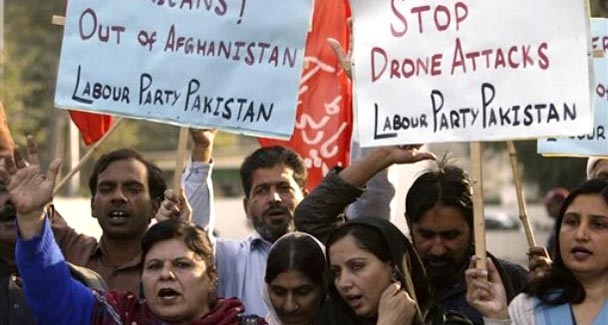 Shakespeare once said ‘Few love to hear the sins they love to act’. One has to only look at the political opinions of various Pakistanis to corroborate his observation. The phenomenon of hypocrisy in Pakistan is not limited to a specific quadrant on the political compass. In fact, all the ideological factions of Pakistan i.e. Islamists, Leftists, Insafians, Liberal-Fascists etc., exhibit this phenomena in its essence. The pervasiveness of this stark hypocrisy has been pestering me for a little while now. So, I finally decided to undertake the task of categorically exposing it.

Islamist hypocrisy
The most skilled players in the infamous sport of hypocrisy are the Islamists of Pakistan. These are the people who idolize Abdullah Azzam, try to distinguish the ‘pious’ Afghan Taliban from the ‘Zionist’ Tehreek-e-Taliban Pakistan and share photoshopped pictures of the ‘massacre of Muslims in Burma’ on social media. They value the life lost at the hands of an American drone more than the life lost at the hands of the religious extremists.

They pour their hearts out for a person killed by a drone strike but stay silent when Shia Muslims are butchered across the country. They organize rallies across the country to campaign for the release of a suspected terrorist i.e. Afia Siddique but they vigorously defend the imprisonment of a woman wrongly accused of blasphemy i.e. Aasia Bibi. They tend to condemn the assassination of Osama Bin Laden as an imperialist act, yet they glorify the assassin of Governor Salman Taseer, whose only crime was to speak our bravely against the injustices that result from the blasphemy laws. On one hand they curse France because of the veil ban and regard it as a vicious attack on multiculturalism and on the other, they firmly believe that the only acceptable culture in Pakistan should be that which is purely Islamic in nature.

They strive to convert non-Muslims to Islam, yet they campaign for a death penalty for people who leave Islam. They pray and hope for the destruction of Israel, yet they completely overlook the fact that their ‘Great Jihad’ in Afghanistan was partially financed by the ‘dirty Zionists’ of Israel. In a nutshell, they believe in the following equation:

Leftist hypocrisy
This group is not so prevalent among the general population but they showcase fine skills that can improve their rank on the ‘National Hypocrisy Scale’. These are the people who have a picture of Che Guevara as their DPs, refer to each other as ‘comrade’ and try to link every single evil of our society back to capitalism or American imperialism. Though I would say that I do respect many leftists in our society, but I can’t just overlook over the hypocritical traits that they display. They are very vocal about the atrocities committed by the United States in Iraq, Afghanistan, South-east Asia etc., but they completely ignore the atrocities committed by former Communist countries. And if someone raises the question regarding the millions who died during the Stalinist Purges, they conveniently dub it as either sacrifices which were necessary or inevitable for the advancement of Socialism or as exaggerated rumors spread by the Western capitalist media. They campaign vociferously against the human rights violations committed by American troops in Afghanistan (which I agree should be condemned), but they choose to remain silent over the human right violations committed by Communist countries. Even when they are talking from a historical perspective, they’ll find ways to justify the Soviet invasion of Poland, Hungary and Czechoslovakia but will demonize United States for their act of policing the world during the Cold War. Moreover, some leftists even tend to equate Taliban’s actions with an anti-imperialist struggle (some even go as far as to justify it), which is a direct result of American hegemony.

Insafian hypocrisy
And how can we forget our very own PTI trolls (Imran Khan fan club) when it comes to discussing hypocrisy? Self-proclaiming is what they do best. They regard themselves as: the saviors of the nation; the awakened youth; the revolutionaries etc. I regard PTI trolls as my personal favorites because of the way they apply bogus logic and flawed reasoning to their political opinions. They are the people who used to hate Shah Mehmood Qureshi and Javed Hashmi because of their affiliations with universally corrupt political parties. But as soon as these two politicians joined PTI, all their sins were washed away. Now, PTI trolls regard these two personalities as those with heightened consciences. When someone accuses Imran Khan of having a Westernize and a playboy-like lifestyle in the past, their sole defense is that ‘Imran’s private life is his own business, not yours’. Yet, when they discover paparazzi pictures of the families of politicians (in which they drink, wear short clothes etc.) affiliated with other parties, the rate at which they share these on social media using captions like ‘tRu3 fAc3 ov cOrRupt p0liticIaNz’ is unmatchable.

Liberal-Fascist hypocrisy
Lastly, I’d like to discuss the most entertaining players in the ungentlemanly game of hypocrisy. Loud-mouthed and narcissistic, Liberal-Fascists like to denounce everything which is Islamist and they cleverly find new ways of irritating everyone who disagrees with them. They epitomize the art of trolling knowing that their views will never be in line with those of the majority. Though I have to say that I personally agree with many of their political views, but still, I can’t resist exposing their hypocrisy. They are so deeply entrenched in criticizing Imran Khan that they tend to disregard the fact that all the other politicians are no better. Some of them consider themselves as staunch secularists and loyal jiyalas at the same time, which is a hypocritical act in itself. How can you regard yourself as a secularist and at the same time idolize Zulfiqar Ali Bhutto who bowed down to the Islamists during his rule. Some foreign liberal-fascists of Pakistani origin are so deeply engrossed in campaigning for the liberation of Balochistan and Sindhudesh, that they completely disregard the atrocities committed by separatist militias i.e. Balochistan Liberation Army. Just like the Islamists, some Liberal-Fascists possess double-standards when it comes to multiculturalism and human rights. They think that Pakistan should be a secular state that accepts all forms of culture (..and I agree that Pakistan should be a secular state.), but they campaign for the complete ban on hijab throughout the Western world because it is culturally offensive and violates the ‘dignity’ of a woman, as she is mostly forced to wear it. Some liberal-fascists are so determined to stand up against the Islamists, that they tend to choose the Republicans over the Democrats because they think that the Republicans will take a tougher stand against the Islamists (Note that by doing this they are ignoring the misogynist policies proposed by the Republicans). The latest dilemma that the Liberal-Fascists are facing is regarding the Syrian Civil War. They are having a hard time to decide who to support in this war. On one hand, they have the rebel army which is infiltrated by the Al-Qaeda but supported by their ideological godfathers i.e. US and NATO. And on the other hand, they have Assad, a dictator and an ally of the ‘evil’ axis of Russia, China and Iran.

NOTE: The author was once part of two of these groups. He doesn’t identify himself completely with either of the two because he places his conscience above his pride.