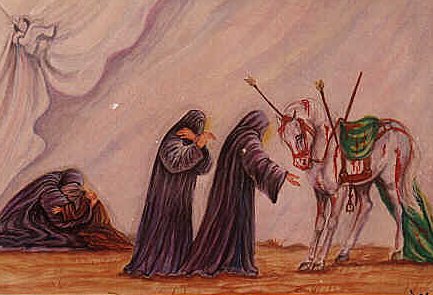 The declaration of the oneness of Allah (Tauhid) and the denial of subjugation to any worldly power is the key foundation of the Islamic faith. While the Prophet Muhammad (peace be upon him and his progeny) taught us the Kalma (fundamental article of faith), i.e., la ilaha illallah (There’s no God but Allah), it was in fact his grandson Hussain (peace be upon him) who demonstrated how to uphold the banner of Tauhid by refusing to accept a tyrannical and unjust Caliph (Yazid ibn Muawiya) as a leader of Muslim community.

Imam Hussain’s stand (Qayaam) against Yazid ibn Muawiya, his journey to Karbala and unparalleled sacrifices were in order to preserve the spirit of Tauhid. In other words, Imam Hussain was the embodiment of ‘la ilaha illallah’. He refused to compromise with tyranny and injustice. He sacrificed his life but did not agree to give his hand in ‘bayah’ (allegiance) to Yazid.

In the words of famous poet and philosopher Allama Dr. Muhammad Iqbal:

Imam Hussein uprooted despotism forever, till the day of Resurrection. He watered the dry gardens of freedom with a surging wave of his blood, and indeed he awakened the sleeping Muslim nation. If Imam Hussein had aimed at acquiring the worldly empire, he would not have travelled the way he did. Hussein weltered in blood and dust for the sake of truth. Verily, therefore he becomes the foundation of Muslim creed ‘La Ilaha Illallah’, meaning there is no deity but Allah.

In one of his verses, Iqbal says:

Loose translation: Imam Husayn voluntarily gave his life at Karbala for the sake of Allah or Truth. So it goes without saying that Husayn laid the foundation of the cardinal Principle of Islam -the belief that there is no god except Allah.

In the words of Khwaja Moinuddin Chishti Ajmeri:

In this brief post, we offer a collection of two Nohas and one Qasida (all in Urdu) as a tribute to Imam Hussain in acknowledgement of his services as a saviour and embodiment of la ilaha illallah.

Click here to post a comment
Blame the victim: DAWN newspaper’s role in Shia Genocide
Protecting the killers: A response to Dawn blog on confining religious processions – by Sabah Hasan