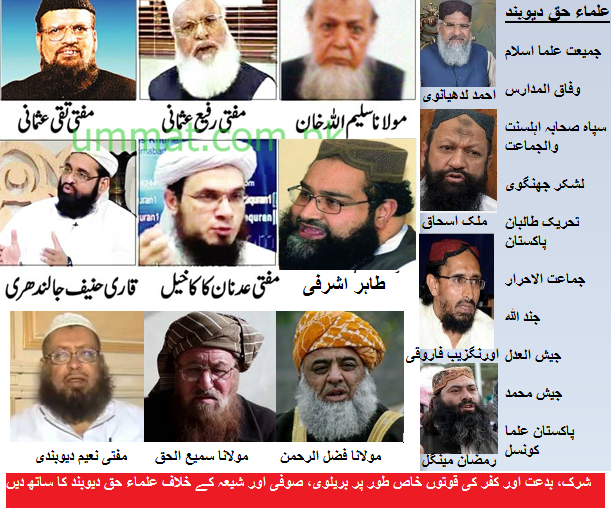 Deobandis are an offshoot that represent a mutant and Wahhabized strain of the Sunni Hanafi sect. Historically, they have aligned themselves with puritanitcal, literalist and takfiri Salfi and Wahhabi movements that seek to marginalize and apostasize the majority Sunni Hanafi, Sufi and Barelvi school of thought.

The Deobandi cult is found primarily in India, Pakistan, Afghanistan and Bangladesh and has recently spread to the United Kingdom, United States and has also a presence in South Africa. The name derives from Deoband, India, where the pro-Jihadist  religious school (madrassa) Darul Uloom Deoband is situated.

The central tactic of Deobandis and for that matter, their Salafist and Wahhabi patrons, is to use and abuse the cover of Sunni Islam for their acts of violence, extremism and apostacy.

The Deobandi sub-sect started to revive a puritanical Islamic (mostly Salafi Deobandi) identity and violent Jihad in reaction against British and other Western influences in South Asia . By virtue of its intolerant and violent approach not only against Christians and Jews but also against fellow Muslims (Sunni Sufis or Barelvis, Shias), the Deobandi sect became largely co-opted by the Saudi-inspired Wahhabi Salafi movement. Hard-line Deobandi clerics consider Sunni Sufi Muslims as polytheists and Shias as infidels. The Deobandi and Wahhabi cults are much close to each other in their approach towards violent Jihad against Jews, Christians, Sunni Sufi Muslims and Shia Muslims. The Deobandi political and militant groups in Pakistan and other countries are a major recipient of funding from Saudi Arabia, Qatar, UAE, Kuwait and other Arab countries. Deobandi militants are also an important part of the global Jihadist terroirsts currenlty fighting as a part of ISIS and Al-Nusra in Syria and Iraq, Al Qaeda in Afghanistan and Pakistan, and so on.

In the UK, according to The Times, about 600 of Britain’s nearly 1,500 mosques are run by Deobandi affiliated clerics, and 17 of the country’s 26 Islamic seminaries follow Sunni Deobandi teachings, producing 80% of all domestically trained Muslim clerics. In addition, up to 100 mosques are run by Salafi Wahhabi affiliated clerics. Most Deobandi and Salafi Wahhabi mosques in the UK as well in the US and other countries receive regular funding from Saudi Arabia and other pro-Wahhabi Arab countries. Muslims praying in these mosques and children being educated in their seminaries are often brainwashed with puritanical and sectarian interpretation of Islam, leading to increasing hatred of Jews, Christians, Hindus, Sunni Sufis, Shias, Ahmadis etc.

While not all Deobandis are violent, those who actively participate in violent Jihad against the West or fellow Sunni Barelvi Sufi or Shia Muslims or those who are their apologist are described as Takfiri Deobandis.

A Takfiri Deobandi is one who declares followers of all other faiths as infidel, polytheist or Kafir. Such stringent and dogmatic is this Takfiri (apostatizing) ideology that it does not spare event the moderate Deobandis themselves. It is associated with the groups that the state of Pakistan has long declared terrorist organizations; i.e, Sipah-e Sahaba Pakistan (now known as Ahl-e Sunnat Wal Jamahat ASWJ, also operating as Lashkar-e-Jhangvi and Jundullah) and Tehrik-e Taliban Pakistan (TTP). All of these banned organizations are Deobandi, and practice Takfiriat, i.e., treat Shia Muslims, Sunni Barelvis and other Islamic sects as non-Muslims. Moreover, they promote the concept of violent Jihad against secular governments in the West and even in Muslim majority countries.

In theory, a Takfiri is a Muslim fanatic who accuses another Muslim of apostasy because of ideological or political reasons, and then resorts to violence to implement his faith or political agedan. In principle the only group authorised to declare a Muslim a kafir is the ulema, and this only once all the prescribed legal precautions have been taken. However a growing number of splinter (Jihadist) Salafist/Wahhabi and Deobandi groups have split from the orthodox method of establishing takfir through the processes of the law, and have reserved the right to declare apostasy themselves. The labeling of fellow Muslims as kafir and the practice of declaring takfir upon them is a legacy from the medieval Islamic Salafist writer, Ibn Taymiyyah. This belief allows Takfiris to justify the use of violence against fellow Muslims; a contemporary example being the anti-Sunni Sufi violence perpetrated Libya, Syria and Mali and anti-Shia violence in Pakistan and Iraq. Takfiris also reject the traditional Muslim duty to obey one’s legitimate rulers in all manners that do not contradict Sharia, as sedition is viewed as a great danger to a nation. However Takfiris consider all political authority that does not abide by their interpretation of Islam as illegitimate and apostate; a view which closely mirrors Sayyid Qutb’s views on jahiliyyah. Takfiris are known for violently killing fellow Muslims by beheading or suicide bombing.

The question is: Can we combat terrorism without identifying the terrorists? https://lubpak.net/archives/236725

An interesting fact which the Pakistani media has either wittingly or unconsciously overlooked or kept obscure is that in all major acts of terrorism, be it bombing of Marriott Hotel Islamabad or attack on GHQ Rawalpindi, attack on Sunni Barelvi /Sufi and even Deobandi mosques around Khyber-Pakhtunkhwa, attacks on Ahmadis or Christians, it was all Takfri Deobandi groups that were involved in it. But they only named the organizations, that too quite fearfully. Deliberately kept hidden was the fact that all these groups subscribe to Takfiri ideology, and incidentally, all of them are Takfiri Deobandi.

What media does is to use ambiguous terms like ‘Sunni extremists’ to describe these #TakfiriDeobandis; when, in fact, these Takfiri Deobandis have killed even relatively moderate Deobandi clericss (e.g., Maulana Hasan Jan, Mufti Nizamuddin Shamezai, Dr. Farooq), Sunni Sufis/Barelvis (e.g., Sarfraz Naeemi, Abbas Qadri, Saleem Qadri etc), let alone Shias, Ahmadis and Christians. This ambiguous ‘Sunni Extremist’ term is further coloured by ‘sectarian violence’ so as to present it as war between Sunni and Shia which it actually is not. It is rather a radical Takfiri Deobandi against the rest.

Majority of Sunni Sufis, Barelvi and some moderate Deobandi groups in Pakistan have dissociated from Takfiri Deobandi terrorists of the Sipah-e-Sahaba and Tailban. Here’s an example: https://lubpak.net/archives/71673

While one may disagree with Zaid Hamid’s political ideology and agendas, his article on Takfiri Deobandis is a must read: https://lubpak.net/archives/226972

Takfiri Deobandis are followers of the tyrant Caliphy Yazid who killed the grandson of Prophet Muhammad (PBUH). Therefore, no surprise that Darul Uloom Deoband has issued a fatwa in support of Yazid. https://lubpak.net/archives/231807

According to academic research by Professor Dr Murtaza Haider, “As of late, the followers of majority Sunni sects, such as Sufis, Barelvis, have increasingly become targets of militants who are followers of radicalised Sunni sects. The attack on Data Darbar, the mausoleum of Lahore’s patron saint, in July 2010 left almost 50 moderate Sunni Muslims dead. In an earlier post, I reported police statistics which showed that almost 90 per cent of arrested terrorists in Pakistan were followers of the Deobandi sect.” (Pakistan imploding under sectarian violence
http://dawn.com/2012/04/18/pakistan-imploding-under-sectarian-violence/ please read it to understand how Takiri Deobandi thought has led to persecution of moderate Muslims, and other minorities).

Also refer to this article on Dawn.com providing statistical details of violence by Takfiri Deobandi terrorists of Sipah-e-Sahabas and Taliban. http://dawn.com/2011/10/05/an-incurable-disease/ 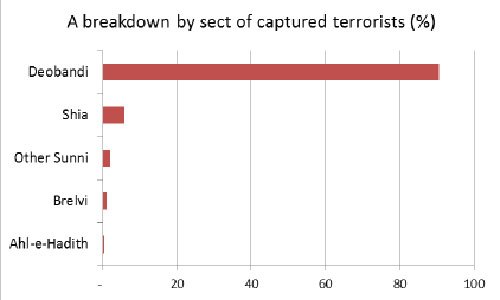 The network of sectarian violence in Pakistan has its roots in the Deobandi sect. Syed Ejaz Hussain, who is a deputy inspector general of police, for his doctoral thesis in criminology at the University of Pennsylvania analysed the demographic and religious characteristics of the 2,344 terrorists arrested between 1990 and 2009 in Pakistan*. These terrorists were the ones whose cases were forwarded to the courts after the police were satisfied of their guilt based on their preliminary investigation. The sectarian breakdown of the arrested terrorists revealed that more than 90 per cent were of the Deobandi sect. An ethnic breakdown revealed that 35 per cent arrested terrorists were Pashtuns who in fact make up only 15 per cent of Pakistan’s population. While there is indeed a tiny percentage of Shia and Sunni Sufi Barelvi militants (e.g., Sipah-e-Muhammad, Sunni Tehreek), none of Shia and Sufi/Barelvi militants have indiscriminately attacked ordinary Shia or Sunni population, markets, army, police, mosques etc. Instead, Shia and Ssufi/Barelvi’s reprisal attacks have been limited to violence against known militants and terrorists of Sipah-e-Sahaba and Taliban, and are consistent with the discourse that resistance to genocide is basic human right, in fact a moral duty! In a way, the very few attacks on  Deobandi terrorists are not much different from the US/NATO’s strikes on Takfiri Deobandi terrorists hideouts in Pakistan’s tribal areas. 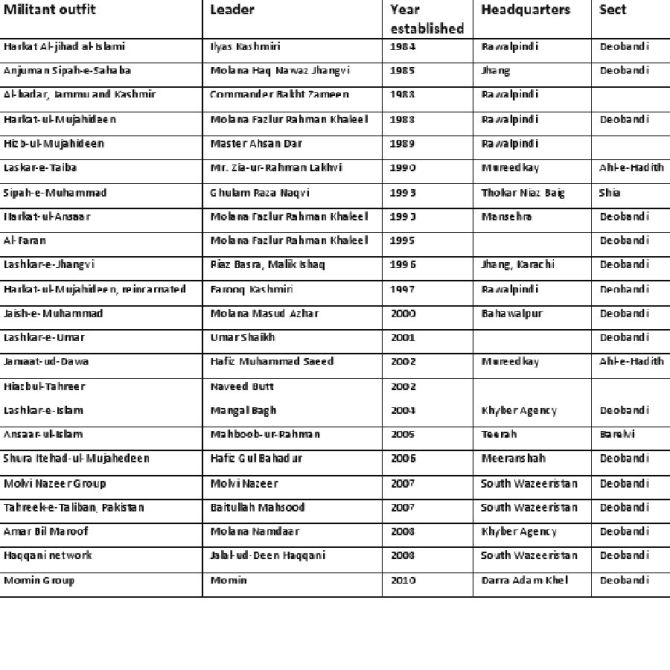 The Pakistani media must act professionally and honestly. They must not hide the identity of both the killers and victims. At a time when Takfiriat has been trying hard to make grounds, it has to be exposed and fought. Takfiriat has already brought huge devastation in the Middle-East. Such is its potency and stringency that Takfiri Salafs have taken on Salafi Hamas in Gaza, and Muslim Brotherhood in Egypt, let alone in Libya and other states (http://www.asharq-e.com/news.asp?section=1&id=31554 and http://www.canada.com/news/Egypts+most+extreme+hardliners+dubbed+takfiris+have+multiplied/7091435/story.html) That ideology should not and must not take its roots here, lest we lose a still tolerant society.

At a time when Shia genocide and Sunni Sufi genocide has taken a violent turn, with numerous bomb and suicide attacks on Muharram processions and Majalis around country, it is ever more important to highlight it. Dishonesty or silence on it further enables Shia genocide, persecution of targeting of other moderate and peaceful Muslim sects, and minorities like Christians and Hindus.

Ulma-e-Deoband and My Bit for Change: Two websites producing Wahhabi and Deobandi Jihadists in the West

Followers of Yazid and Takfiri terrorism 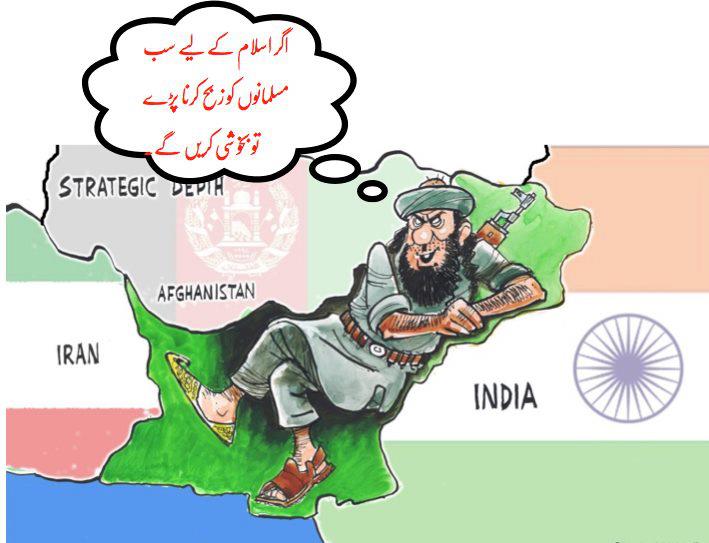 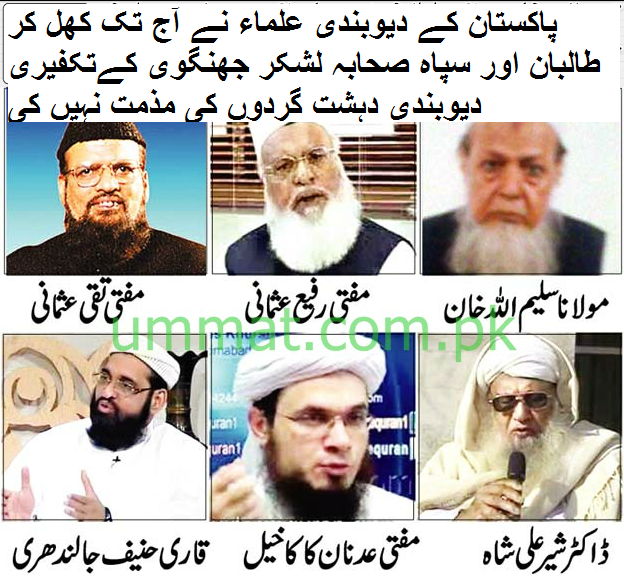 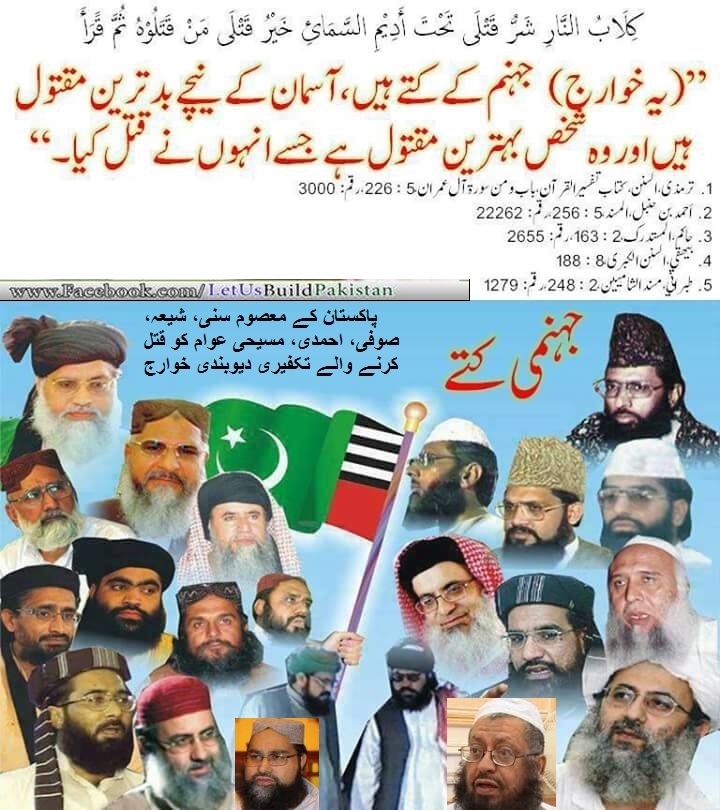