The recent shooting of 14 year old Malala Yousufzai has sparked an angry reaction across the country resulting in a widespread public outrage against the Taliban militants. Many of us hoped that this incident could lead our society to a consensus against the extremist ideology of these militants. But unfortunately all such hopes faded away when a section of our society down played this incident. They tried to confuse it with other issues like drone attacks and some even went to the extent that they invented baseless conspiracy theories against the poor girl. But on the other hand the same people were out in the streets raging with anger when the sad story of Dr Aafia Siddiqui became public.

Why so much anger against atrocities on Dr. Aafia and so much confusion, diversion and conspiracies on the shooting of Malala? Perhaps a comparison of our contrasting reactions can help us find some answers. But before I do that I want to make it clear that the purpose is not to prove one terrorist and other a hero but to precisely highlight why our reaction to these two incidents was so different. Aafia Siddiqui was picked up by US and Pakistani agencies from Karachi on March 30, 2003. According to popular narrative, she spent the next five years, till July 2008, at Bagram detention centre facing inhuman atrocities. She was rediscovered in July 2008 when her story became public. There are alternate narratives which negate this version and link her to terrorists-related activities. According to her uncle Shamsul Hasan Farooqi she was in Islamabad in January 2008, six months before she was found in Afghanistan. He told media outlets that Aafia came to his house in Islamabad on 22 January 2008 and asked him to put her in touch with Afghan Taliban. Her name was reportedly given to CIA by Khalid Sheikh Mohammed, alleged Al-Qaeda mastermind of 9/11 attacks. She was also allegedly married to Ammar al-Baluchi, the nephew of Khalid Sheikh Mohammed. She also opened a joint post-office account with an alleged Al-Qaeda operative al-Majid in US.

It is true that despite these allegations, Aafia was never charged for any terrorist-related activities but at least this tells us that there are some questions marks about her. But did we actually, as a society, try to find out the facts? Did we actually consider that she could be working for these terrorists? Hardly anyone did and majority declared her “Daughter of the Nation”.

On the other hand, do we have same doubts regarding Malala as we have in case of Aafia? The answer is no, but look what we did to her. We declared her “US spy” and God knows what else. Involvement of ISI in disappearance of Dr. Aafia can be clearly seen in all the narratives of her missing five years. Did we stage a single protest against Army/ISI demanding them to tell us the truth? Why all our guns were focused on the US while we knew that our people are involved?

We must ask ourselves this question. Are we a society that one can call seekers and upholders of truth and justice?

Quran asks us to be the bearers of just witness to an extent that our enmity for other group should not turn us away from justice [5:8]. In his first speech as a Caliph, Abu Bakr RA said: If I do well, help

As Muslims our loyalty should be with the truth. But if we analyse our reaction to these two cases we can clearly see that our loyalty is with the individuals, and our hatred for others is turning us away from justice. Dr Aafia was glorified because US was the oppressor but Malala was disgraced just because US praised her. Had we objectively and honestly analysed the two incidents, our reaction could have been opposite.

This is our dilemma as a society. Over the years, we have corrupted our intuitive sense of right and wrong under the influence of this intolerant culture of militancy. And now when we look at the world through this lens of “biased mindset” it only allows us to see the world, as Stephen Covey puts it, not as it is but as we are – or as we are conditioned to see it.

We have lost our vision and to add to our misery we are in constant state of denial. In case of Malala and Aafia we confused the real issues and let our hatred blind us from obvious facts. If we are to become torch bearers of truth then we must get rid of our deep-rooted biases and hatreds. May Allah help us to see things as they are and not as we want them to be seen. 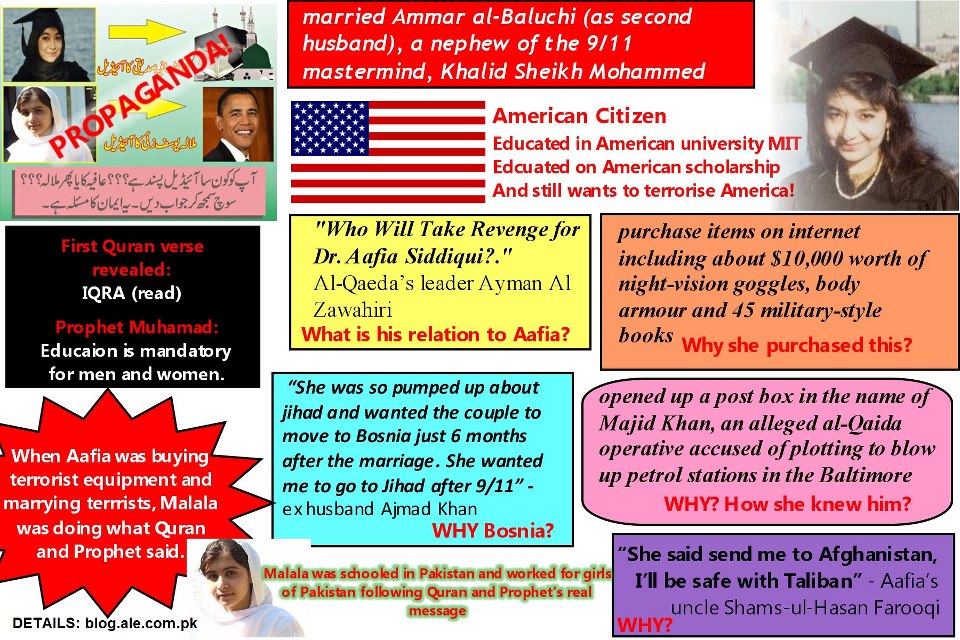