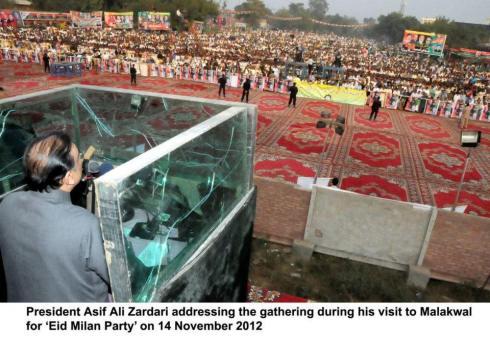 Deriving the insight from the party’s founders, President Asif Ali Zardari promised to tag along in their footsteps, and empower the underprivileged of Pakistan, and erect a better future for their future generations. On the occasion of his address to a PPP Eid Milan gathering in a sub urban section of Malikwal on November 14, 2012, the enormous reception offered to the President in a district of Punjab (a province, administered by an opposition political party) was in itself a testimony of the Pakistan Peoples Party, being the party of the masses, and the best choice of the people of Pakistan. President Asif Ali Zardari’s dedication to an egalitarian Pakistan is noticeable from his spending eleven and a half years of his life in the prison without a single conviction, and eschewing an easier approach to make a deal with the rulers, and betray the people of Pakistan, leaving them in suppression. The tri-color party flags and placards with pictures of Shaheed Zulfikar Ali Bhutto and Mohtarmah Benazir Bhutto were seen in abundance, and the atmosphere echoed with the slogans of Jeay Bhutto, and “Agli Bari, Phir Zardari”, demonstrating the peoples’ trust in the policies of the current regime. President Asif Ali Zardari delivered the first half of his speech in Punjabi- a gesture which was greeted by the audience with huge applause. Following are a few highlights of the President’s address:-