Weekly viewpointonline in his 18th issue has focused on Media in Pakistan. In a series of very isnightful articles they have highlighted various aspects of Pakistani media, their corporate goals, representing state narratives, the self complimentary, self appreciative style,  media-judiciary- civil society trio and promoting hatred, jingoism, xenophobia, sectarianism and exclusion.

Starting from a cartoonist i.e Sabir Nazar, viewpoint on the subject from articles like Pakistan media’s mysterious financing, Media and the middle class in Pakistan,  Reporting conflict: media’s primal urge, On media representation of rape survivors , Mullah TV , Journalism under jingoists, A report on post 9/11 Journalist killings in Pakistan, Flood fighting with burka and tauba istakhfar and an Interview of renowned journalist Mahir Ali on the corporate media pursuit of corporate benefits.

Here we are posting an article from the E-zine(aliarqam) 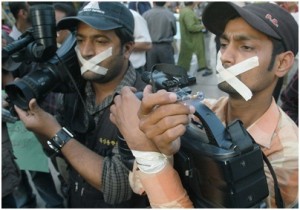 Military and mass media are the institutions that have outgrown more than anything else in Pakistan, one a symbol of control and the other a sign of freedom. However, while the military grew in leaps and bounds, progress in media is still slow and challenging. Unfortunately, when it comes to news media in Pakistan, it’s business as usual. Despite expansion and comparative freedom in reporting, media access to the common man is limited, state coercion continues and a substantial number of journalists lack professional maturity.

I still remember the days when I was working for PTV News. Amazingly there were no written rules to control but nothing would go on air without the worst kind of editorial control. Even a minor news report on a highly non-political topic would be brutally edited by a battalion of Editors and Controllers and in most cases I had to drop my report from telecasting because the final version was not worth showing. At least I had that much freedom! Also, no political report would go on air without going through the watchful eyes of the News Director and even the federal Secretary of Information who was a frequent visitor to the PTV newsroom.

Radio and TV were the official mouth piece of the government in those days and BBC was the only trustworthy news medium for the general public. Pathetically, little has changed so far! BBC is still the most trustworthy news medium and Pakistani media are still controlled by the government, to a lesser extent though. What has changed is the variety and number of mass media that have emerged as a result of privatization.

While both military dictatorships and civilian governments were busy in imposing restrictions on news media in Pakistan during the last 60 years, it was the wave of globalization, satellite communication and the internet that made the flow of information possible at an amazing speed internationally leading to privatization of media all over the world.

We are now witnessing a surge in electronic media including FM radio stations and TV channels of all kinds all over the country which has become a booming business for the government and media owners both. The government earns millions through auctioning radio and TV licenses and media owners get profits through the ever-growing consumerism and commercialization in the society.

The whole purpose of privatizing the mass media, however, was to provide an easy access to all strata of the society including low income populations in urban and rural areas. The Pakistan Electronic Media Regulatory Authority (PEMRA) was created through a federal ordinance in 2002 to attain this goal. With the organizational mandate to “facilitate the devolution of responsibility and power to the grassroots by improving the access of the people to mass media at the local and community level” PEMRA has issued licenses to 54 companies to manage and run 83 TV channels, 104 commercial-FM radio stations and 24 non-commercial radio stations to educational institutions. These companies are located in four cities: 28 in Karachi, 17 in Lahore, 9 in Islamabad and one in Hub.

Although PEMRA allows only four TV channels, four radio stations and two broadcasting rights (technically called landing rights) to one owner or company, the ownership is highly concentrated in urban areas, mostly in Punjab and Sindh provinces. Baluchistan has one company in Hub and Khyber Pakhtoonkhwah has none.

Besides the obvious concentration of media ownership geographically, costs of running media organizations are too high. Each application for a TV channel costs Rs. 20,000 and its operating license costs Rs. 2.5 million. Operating a radio station is, however, more affordable comparatively as the application fee FM Radio costs Rs.10, 000 while the license fee varies by the area.

Journalism has always been a dangerous business for those journalists who dare to challenge the status-quo in Pakistan. Facing all kinds of media controls, Journalists have been protecting their professional rights and freedom through a prolonged and daring resistance movement. Their audacious role in the lawyers’ movement, which ultimately ousted General Mussharraf, and the media projection of common issues is restoring media trust among the masses.

Although media are moderately free in Pakistan now, various forms of media restrictions by democratically elected governments and army regimes have also become a way of life. From direct harassment of journalists to closing down of mews media, to imposing censorship, all kinds of tactics are common. In the year 2004-2005, for instance, three journalists were killed, two abducted, 206 attacked, 65 arrested and four jailed.

Army regimes are infamous for harassing journalists and restricting freedom of expression in Pakistan. General Pervez Mussharaf allowed comparative freedom in the earlier period of his regime. In the later part, however, he started showing his true colors by declaring emergency on November 3, 2007 and imposing draconian laws to curb freedom of expression. He suspended broadcasts, blocked websites, raided media offices including newspapers, radio and TV stations, and censured newspapers.

Although the current PPP government has repealed all the draconian laws of the Musharraf regime, they are in the process of introducing a new bill to give more power to government agencies to arrest and jail journalists for three years for broadcasting “anything defamatory against the organs of the state,” as the proposed bill states. The proposed legislation, if approved, will impose severe restrictions on covering terrorist attacks.

Using the latest satellite and cellular phone technologies, TV news channels are increasingly telecasting live news events. This new phenomenon sometimes exposes the government on one hand and provides direct access to the public on the other. The ongoing flood coverage is a case in point where TV is exposing the government’s insensitivity to the miseries of flood victims further widening the gap between the government and masses.

However, this emerging media power can also become a dangerous tool in the hands of inexperienced journalists who can easily misuse it. There is always a dividing line between objective journalism and social activism but sometimes news anchors and reporters cross this line. I have watched talk show anchors vigorously supporting or opposing people and institutions creating an emotionally charged environment.

In the cut throat media competition, media managers are increasingly adopting cheap tactics for getting attention. Organizing shouting competitions among their talk show participants, provoking them to insult each other and avoiding in-depth discussions on issues are common tactics of getting popularity these days.

Although, ensuring absolute objectivity in news remains a myth, news professionals can use common sense by maintaining the basic human dignity, separating themselves from the issue being discussed, including both sides of the issue and ensuring accuracy in news coverage. As it looks, the whole media industry is learning from on-the-job training without going through the training process. It’s like sending a soldier to the battle field without training him how to use his weapons. It is the responsibility of news managers to offer proper training to young journalists in media ethics, professional skills and social responsibilities of journalists in covering news.

Overall, the news about news media in Pakistan is good and bad. Despite an unprecedented growth of media and achieving a level of professional freedom, news media are still facing state coercion and a substantial number of journalists lack professional maturity.