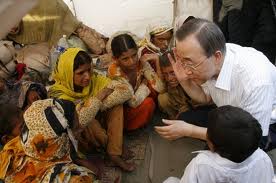 The United Nations and its partners today launched their largest-ever natural disaster appeal, seeking more than $2 billion for millions of Pakistani flood victims devastated by nearly two months of massive inundations in what Secretary-General Ban Ki-moon called the worst such disaster that the UN has faced.

Overall the floods in Pakistan have affected more than 20 million people, equivalent to over 10 per cent of the total population, and the new $2.07-billion appeal, which more than quadruples the original $460 million sought last month, will provide aid for up to 14 million people over a 12-month period.

“We are seeing the equivalent of a new disaster every few days in Pakistan,” UN Under-Secretary-General for Humanitarian Affairs and Emergency Relief Coordinator Valerie Amos said in launching the appeal in New York.

“Yesterday, new breaches of the embankments of Manchhar Lake in Sindh flooded more villages. Millions of people have lost everything. Our task is to give people the help they need.”

The rolling floods have killed fewer than 2,000 people but have exposed over 20 million others to homelessness, malnutrition, risks of epidemics and loss of livelihood as the waters have swept the country from north to south, damaging or destroying nearly 1.9 million homes and devastating at least 160,000 square kilometres – an area larger than England.

“All of this makes the Pakistan floods the worst natural disaster the United Nations has responded to in its 65-year history,” Mr. Ban said at the launch. Dozens of countries expressed their support for Pakistan in the crisis and many announced new pledges of financial support.

Previously, the largest natural disaster appeal – nearly $1.49 billion – was launched earlier this year for Haitian earthquake victims. Over $11 billion is required this year for various humanitarian appeals worldwide, the largest amount sought since the beginning of the appeal process in 1991.

Today’s appeal comprises 483 projects to be carried out by 15 UN bodies, the International Organization for Migration (IOM), and 156 national and international non-governmental organizations (NGOs). It includes the earlier $460 million, launched on 11 August, which is now 80 per cent funded, making the unmet requirements for this emergency $1.6 billion.

Pakistan’s development prospects may be disrupted for many years. The damage to the economic infrastructure and livelihoods is immense. Irrigation, drainage and storage facilities are badly affected. Farmers who lost their crops and are not able to plant their fields by November are likely to remain dependent on aid until well into 2012. Hundreds of thousands more lost their shops or other small businesses.

The size of the revised appeal reflects the enormous human and geographic scale of the catastrophe, and the necessity of putting into place the right kind of early recovery, including projects in agriculture, community restoration, education, health and shelter.

“In these difficult financial times, countries have been extremely generous in helping those in need around the world, contributing over $5 billion to appeals this year,” Ms. Amos said. “But more is now needed. The Government and the people of Pakistan have already done much to help families affected by these floods. We must also do our part – we simply cannot stand by and watch the immense suffering in a disaster of this scale.”

The Pakistan Floods Emergency Response Plan will be reviewed in early 2011 and if necessary further revised.

The UN World Food Programme (WFP), which has been streaming emergency aid into Pakistan since the beginning of August, today urged donors to provide the necessary additional funds. “No one could have predicted the scale and enormity of this catastrophe where women and children are facing a dangerous downwards spiral of hunger and malnutrition,” WFP Executive Director Josette Sheeran said. “We need to scale-up now and we need to scale up quickly.”

WFP now aims to provide emergency food assistance to some 6 million people each month through to the end of January while transitioning towards early recovery activities such as food for work and cash for work programmes to restore livelihoods and rehabilitate damaged land, irrigation systems and agricultural infrastructure.

“The road to recovery will be long and arduous and Pakistan will need all the help it can get to build back from this disaster,” Ms. Sheeran said in a statement issued at WFP headquarters in Rome. “Food security is pivotal to recovery and now, as the floodwaters begin to recede, we urgently need additional resources.”

The UN World Health Organization (WHO) said today it had so far managed to avert a second wave of death from disease, with the rollout of diarrhoeal disease centres treating a 30 per cent increase in numbers over last year.

“Much has been done to save lives and prevent illness,” WHO representative Guido Sabatinelli told reporters by phone from Sukkur town in northern Sindh province. “But this is just the start. We are in the middle of the malaria season and already seeing increased cases of suspected malaria in some locations, particularly Sindh and Balochistan.

“We know there were already terribly high rates of chide malnutrition in the country, and anecdotal reports from some clinics are showing higher levels… We will need continued and sustained donor support to protect the health of Pakistanis in the months and years ahead by, in great part, building back a health system that should be better than what was there before for many people.”