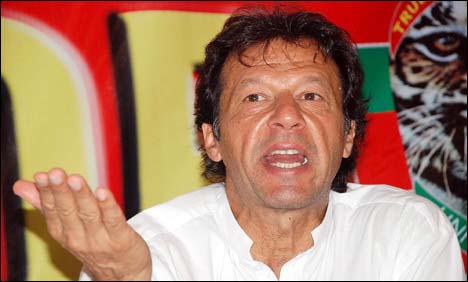 LAHORE: Pakistan Tehreek-e-Insaf Chairman Imran Khan Saturday said those who accused his party of enjoying a patronage of ISI and its former Chief General (Retd) Ahmed Shuja Pasha have been exposed following the landmark judgment of the Supreme Court in the Asghar Khan case.

“The Supreme Court’s ruling has proved as to who actually received money from ISI and which party was formed by the ISI,” Imran Khan said while addressing a gathering during his party’s program of ‘Tsunami Membership’ here.

The infamous 1996 Asghar Khan case is finally over. It took the men on the hill a quarter of a century to come to terms that Benazir Bhutto was right. The 1990 election was indeed stolen.
The Supreme Court has not minced words in its short order: “Late Ghulam Ishaq Khan, the then President of Pakistan, General (R) Aslam Baig and General (R) Asad Durrani acted in violation of the Constitution…”. Brazenly, this cabal rigged the 1990 elections by doling out funds to parties opposing Benazir Bhutto’s Pakistan Peoples Party. According to the Supreme Court, “Their acts have brought a bad name to Pakistan and its Armed Forces as well as secret agencies in the eyes of the nation, therefore, notwithstanding that they may have retired from service, the federal government shall take necessary steps under the Constitution and law against them.”
The Supreme Court verdict clears the way for prosecuting General Beg and General Durrani for treason against the State under Article 6 of the Constitution. However, it is unlikely that the present government has the will to institute such proceedings or waver from its time-tested policy of reconciliation.
The Asghar Khan case will pose an equally uncomfortable dilemma for the armed forces. Given the recent precedent in the NLC scam, General Kayani and the corp commanders will now be asked as to why General Aslam Beg a former Chief of the Armed Forces and General Asad Durrani, head of the ISI, not be re-inducted into the army and face court martial.
In the ultimate analysis, a trial for treason or a court martial are unlikely to have any salutary effect on the destiny of this nation. Knowing the truth – as we have done so with the Supreme Court verdict – may serve national interest much better.
General Durrani is of course guilty of stealing the 1990 election. But he was man enough to admit his wrongs. We must not forget that without his admission and sworn affidavits, this blot on our nation’s history would never have seen the light of day. More dark knights from the establishment need to take General Durrani’s high road.
The Asghar Khan case is not just about 1990. It is about 2012. If this verdict has vindicated Benazir Bhutto, it has also thrown the gauntlet to Asif Ali Zardari’s Presidency.
The Supreme Court’s judgment focuses on Ghulam Ishaq Khan’s constitutional violations – however, the principles enunciated by the Supreme Court sound like they may have someone else in mind.
The Supreme Court has held that “A President of Pakistan, in parliamentary system of government, being head of the state represents the unity of the Republic under Article 41 of the Constitution. And as per the oath of his office in all circumstances, he will do right to all manner of people, according to law, without fear or favour, affection or ill-will. Thus, holder of office of President of Pakistan, violates the Constitution, if he fails to treat all manner of people equally and without favouring any set, according to law, and as such, creates/provides an occasion which may lead to an action against him under the Constitution and the Law.” (Source)