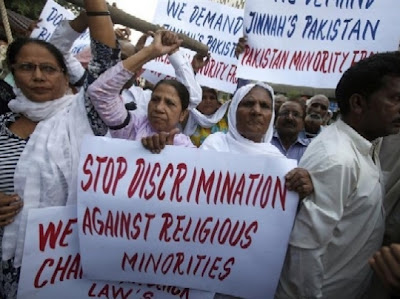 Physicist Mohammad Abdus Salam was the first Pakistani and the first Muslim to win a Nobel prize in science. His discoveries continue to dazzle the world as demonstrated by the verification last summer of a theory to which Salam had contributed, on Higgs boson, or the “God particle.” But in his home country, Dr. Salam is without honor.

Throughout his lifetime Dr. Salam was a practicing member of the Ahmadiyya Muslim community, whose very existence was pronounced blasphemous by a 1974 constitutional amendment and by later criminal laws. In protest, Salam left for London in 1974 where he continued the groundbreaking work that won him the Nobel five years later. After his death in 1996, his remains were returned to Pakistan and buried in an Ahmadi cemetery, with his tombstone’s epitaph reading “First Muslim Nobel Laureate.” A magistrate ruled that the word “Muslim” on an Ahmadi grave was blasphemous and ordered it sanded off.

Dr. Salam’s case is a prominent example of a dangerous development that has been entirely overlooked by American foreign policy: Though few blasphemy laws are as explicit about it as Pakistan’s anti-Ahmadi ones, laws purporting to protect Islam, which are being increasingly applied in once-secular or “moderate” Muslim countries, typically target non-Muslims and liberal Muslims. Leaving such groups little choice but to seek safety through emigration, these laws are inextricably linked to what is shaping up to be slow-motion religious cleansing. The percentages of Pakistan’s Ahmadi, Christian, Parsi, and Hindu communities have all plummeted over the past 30 years, with non-Muslims declining from 5 percent of the total population to just 3.5  percent. If Shiite Muslims are taken into account, the number of those emigrating from Sunni-majority Pakistan as a result of religious persecution is even greater.

A crackdown on blasphemy reflects the growing influence of Salafists and other Islamist extremists whose demands to insulate Islamic symbols, leaders, beliefs, and practices from perceived insult appear implacable. A major problem with laws punishing blasphemy is that they are vague, depending as they do on a subjective interpretation of insult, and their parameters tend to be set by extremists. As former Malaysian finance minister Tengku Razaleigh commented on the move last year to adopt legal protections of Islamist sensitivities within his own, moderate country: “‘Sensitivities’ is the favored resort of the gutter politician. With it he raises a mob, fans its resentment, and helps it discover a growing list of other sensitivities.”

Extremists see the religious “other,” by definition, as an insult to, or even, as Saudi textbooks put it, an “enemy” of Islam. They use blasphemy laws as platforms within society to demonize and intimidate religious minorities, and are not above framing members of these communities with fabricated evidence, or holding them to novel and ever-evolving applications of the law. Mobs are incited to ensure state prosecution, no matter how patently unjust. This pattern holds in Pakistan’s continuing blasphemy case against Rimsha Masih, the 14-year-old, mentally disabled, Christian girl accused of burning a Koran in August by Khalid Jadoon Chishti, a local imam with the non-Salafist Barelvi denomination. In the process, associated non-Muslims or unorthodox Muslims feel terrorized and flee. Hundreds of Rimsha’s Christian neighbors have left, and reports indicate that Chishti’s interest all along was to have Muslims relocate to the area. Similar efforts have targeted Shiites in Karachi and Hindus in rural Sindh.

Meanwhile, another 14-year-old Pakistani girl, Malala Yousafzai, who is a Muslim and a reformer advocating education for girls, was singled out and shot in the head by the Taliban this month for promoting “Western thinking,” and “negative propaganda” against Muslims  – in other words, blasphemy. She is now being treated in the U.K. and will not be able to safely return to Pakistan or even resume her advocacy from the West since the Taliban has vowed to come after her again, with the justification that she is a “secular-minded lady”; her Birmingham hospital has had to fortify its security.

During Egypt’s Arab Spring, the number of blasphemy accusations made against members of religious minorities has soared, particularly those directed at Christian Copts, the Middle East’s largest non-Muslim minority. Some have been subject to the rough justice of the street: Last October, in Cairo’s Maspero neighborhood, while the military brutally tried to stop a peaceful Coptic youth protest against church burnings, Salafist television poured fuel on the fire by announcing, without evidence, that the demonstrators had burned a Koran and goading viewers to mobilize against the demonstrators for this blasphemy. Last month, in Sinai, hundreds of Christians were driven from their city by an Islamist group for no other reason than that their religion is considered a de facto insult to Islam.

Others cases are brought before courts. The Egyptian Initiative for Personal Rights records 17 recent blasphemy cases. One that was dismissed on procedural grounds targeted Naguib Sawiris, a Copt and a member of Egypt’s wealthiest family, who tweeted a picture of Minnie and Mickey mouse in Salafist garb. Recent weeks saw the arrest of 9 -and 11-year-old Coptic boys for allegedly defiling the Koran, and, though released from detention, they are now the targets of a Salafist fatwa condemning them to death. Nevine El-Sayed, a Coptic social-studies teacher in an Assiut middle school, was arrested after the Noor Party’s Salafist Calling complained, reportedly for teaching that the Islamic prophet grew up poor. Other minorities are victimized as well. A Shiite man is serving a sentence for blasphemy because, by praying according to Shiite tradition inside a mosque, he “incited” local Sunnis to storm the mosque with guns, which was considered an act of desecration.

“After Islamists prevailed in Egyptian elections,” Egyptian analyst Samuel Tadros recounts, “the Coptic professional class tried to console themselves that things wouldn’t be so bad and they could live with state restrictions on women’s dress and bans on alcohol.” But, he says, “now that blasphemy laws are bringing the full force of law against their members and are seen to justify Salafi pogroms, many of them, especially the younger generation, have begun packing their bags.” Today, Egyptian Copts’ Facebook pages are filled with queries about getting Western visas.

In once-moderate Pakistan and Egypt, the blasphemy laws and attendant violence is contributing to a brain drain and greater social polarization. Like Dr. Salam, among the first to flee are the highly educated and skilled professionals. Compounding this is the religious cleansing of Christians, Yizidis, and Mandeans in Iraq that has occurred over the past nine years and the bitter sectarian conflict now raging in Syria, both formerly secular countries.

This will in turn pose a challenge for the West as these areas lose the experience of coexisting with Muslim moderates and those who hold other religious beliefs. As the blasphemy-law regime squeezes society into rigid ideological conformity, future elections will be fought on extremists’ terms — the discussion of women’s rights, for example, will inevitably be considered out of bounds, as it is in Saudi Arabia and Afghanistan. Moreover, once blasphemy laws are in place, there is little hope of liberalization from within as the political space for reformers and dissenters shrinks and opposition to blasphemy laws is itself considered blasphemy. In Pakistan, those who have recently tried to reform the blasphemy law — Punjab governor Salman Taseer and government minister Shahbaz Bhatti — have been murdered in reprisal.

Both President Obama and Governor Romney have spoken up for minority rights in the Muslim world. But a serious policy response to religious cleansing and persecution requires policies against blasphemy laws in Pakistan, Egypt, and other core countries of the Muslim world. Neither drone attacks nor a strong military can meet this threat. Specifically, the United States needs to make a diplomatic priority of encouraging nations it aids and considers allies to end punishments for blasphemy. Ahmadis, Shiites, Copts, and other vulnerable religious groups, as well as unorthodox and moderate Muslims are depending on the U.S. to take a stand for freedom of speech and religion.

— Farahnaz Ispahani is a former member of parliament from Pakistan and served on the standing committees on human rights and foreign affairs. Nina Shea is director of Hudson Institute’s Center for Religious Freedom and co-author ofSilenced: How Apostasy & Blasphemy Codes are Choking Freedom Worldwide,Oxford University Press, 2011.