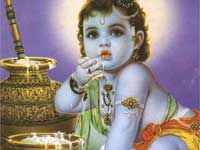 In rare show of inter-faith solidarity, Hindu community of Lahore postponed the birth celebration of Lord krishna because of attack at Karbala Gamey Shah attack on Youm-Ali procession  .

LAHROE: The Janam Ashtami (the birthday of Lord Krishna) was celebrated on Thursday at the Krishna Temple. Hindus and representatives of the Interfaith Peace Committee participated in the celebration.

The festival was scheduled for September 2 but was postponed because of the Karbala Gamey Shah attacks, said a local Hindu. The Evacuee Trust Property Board (ETPB) organized a ceremony at which a birthday cake was cut. ETPB’s deputy secretary Azhar Sulehri was the chief guest. Sulehri wished happiness and prosperity to the Hindu community on this occasion. The Krishna Temple was filled with the scent and smoke of Agarbatti.  Hindus sat in a circle around the fire reciting verses sotto voce.

The Krishna Temple’s Pundit Kashi Ram, wearing prayer clothes, poured oil in the havan (holy fire) and recited Om Namaho Bhagavat Vashodeva aloud. Around a dozen sari clad women, sporting bindis on their foreheads, carried milk, salad and fruit for the worship while reciting mantras from the Bhagvad Gita. The four-foot tall statue of Lord Krishna, portrayed playing a flute and bearing a peacock feather on his forehead, was placed at some height, surrounded by other statues.  Dr Munohar Chand, head of the local Hindu community, distributed parshad and fruits bringing the main ritual to an end. The congregation sang Bhajans in praise of Shri Krishna.

Sunita, a Hindu woman, said that it was not an actual birthday as Hindus believed that Krishna was a god and gods are not born.

“It is the date on which Krishna appeared in this wicked world to end sin” she said. She said that Hindus did not celebrate other avatars’ birthdays because according to their faith they celebrate the birthday of their gods while imagining the concept of their appearance in the world.

Lord Krishna, the ninth incarnation of Vishnu, is the most popular avatar. According to Hindu narration, he is a warrior, a philosopher, a teacher and god. He is accepted as the purna (complete) avatar.