The resolution supports the use of funds by Washington to help relief efforts and “urges the United States administration and the international community, including private citizens and foreign governments, to continue providing assistance” to Pakistan.
President Asif Ali Zardari has lauded the US leadership for the humanitarian gesture and the assistance for the flood affected people of Pakistan. 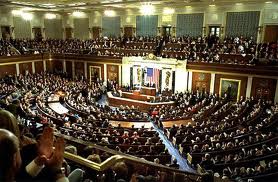 The U.S. House of Representatives has passed a resolution seeking a review of priorities for aid delivery to Pakistan under a bill that gives it $7.5 billion in civilian assistance in five years.
The resolution introduced by Congressman Howard Berman, Chairman of the powerful House Committee on Foreign Affairs, was co-sponsored by 21 other lawmakers.
While expressing condolences to and solidarity with the people of Pakistan in the aftermath of the devastating flood, the resolution sought re-examination of priorities for spending the funds authorised under the Enhanced partnership with Pakistan Act of 2009.
“The re-examination of priorities needs to be done with a view to ensure that the needs of the Pakistan people are appropriately addressed in the aftermath of the disaster,” it said.
The resolution supports the use of funds authorised by the Enhanced Partnership with Pakistan Act of 2009 for the purposes of providing long-term recovery and rehabilitation for flood-affected areas and populations.
It asks the US and the international community, including citizens and foreign governments, to continue providing assistance to help the people of Pakistan and to help strengthen and support the Pakistan government to meet the needs of its people.
Mourning the significant loss of life, as well as the physical damage, caused by the flooding in Pakistan; the resolution says that Pakistan was and remains a close ally and friend of the United States.
It also recognises that an effective and accountable government in Pakistan was essential for the country’s long-term recovery and stability.
The U.S. has donated more than $260 million for flood relief and has provided 18 military helicopters to evacuate people and deliver food and supplies. It has also provided water purification kits and deployed mobile medical teams to help prevent the spread of disease. It has donated the most money and the most helicopters.

Full text of the Resolution follows:

Expressing condolences to and solidarity with the people of Pakistan in the aftermath of the devastating floods that began on July 22, 2010.

Whereas heavy rainfall that began on July 22, 2010, and subsequent flooding throughout Pakistan have caused a humanitarian crisis of unprecedented proportions that has affected over 20,000,000 people, killing more than 1,750, injuring over 2,700, damaging or destroying upwards of 1,800,000 houses, and displacing millions of men, women, and children;

Whereas the devastation wrought by the floods has been catastrophic, submerging one-fifth of the country and destroying critical infrastructure, farms, schools, homes, and businesses, leaving an estimated 800,000 Pakistanis stranded and cut off from all help;

Whereas according to the Government of Pakistan, the floods have affected 30 percent of all agricultural land and could lower by one-half Pakistan’s economic growth rate for the current fiscal year, further destabilizing a nation already beset by multiple daunting challenges;

Whereas the emergency continues to unfold in Sindh Province, where just under 7,000,000 people have already been affected, of whom 1,300,000 are in government relief camps, with new evacuation orders recently having been issued;

Whereas the danger of the floods extends beyond the current humanitarian crisis, with the potential to create significant instability in Pakistan;

Whereas the Pakistani Army, Navy, and Frontier Corps have sent humanitarian supplies and medical teams to flood-hit areas, while the National and Provincial Disaster Management Authorities have coordinated international relief activities;

Whereas the United States has responded to the crisis with relief and recovery funds, food and medical supplies, and logistical support that account for more than 20 percent of total international humanitarian contributions and commitments;

Whereas the United States Agency for International Development (USAID), through its Office of U.S. Foreign Disaster Assistance (OFDA), has supported 26 mobile medical teams, delivered more than 8,000 rolls of plastic sheeting to provide temporary shelter for approximately 247,000 people, and dispatched 13 mobile water treatment units to support the Government of Pakistan’s flood relief effort, which have produced more than 12,000,000 liters of clean water;

Whereas the United States Department of Defense has dispatched 23 military helicopters and four C-130 aircraft to deliver more than 5,000,000 pounds of relief supplies and has rescued more than 13,000 flood-affected individuals;

Whereas the United States has provided civilian and military in-kind assistance in the form of halal meals, prefabricated steel bridges, and other infrastructure support;

Whereas the United States is working in close partnership with United Nations-affiliated and international humanitarian organizations to support relief, recovery, and reconstruction;

Whereas the Pakistani-American community has demonstrated strong leadership in rallying support for flood victims, directing public attention to the crisis, and disseminating information about the response;

Whereas scores of United States private and voluntary organizations have mobilized quickly to respond to the crisis in Pakistan with both emergency relief and longer term development assistance, raising over $11,000,000 in private donations for assessing emergency needs, distributing water, food, and relief items, and providing medical care and temporary shelter;

Whereas the success of United States Government humanitarian efforts depends heavily on the skills, expertise, and field presence of international and nongovernmental organizations;

Whereas United States businesses have contributed more than $8,000,000 in humanitarian assistance for Pakistani flood victims;

Whereas the immediate and swift reaction of United States military personnel, diplomats, and development experts has saved countless lives and encouraged a generous international response;

Whereas the people of the Islamic Republic of Pakistan and the United States share a long history of friendship, economic cooperation, and enduring family ties, and the interests of both nations are well served by strengthening and deepening the bilateral relationship;

Whereas the United States Congress adopted, and the President signed into law, the Enhanced Partnership with Pakistan Act of 2009, which authorizes democratic, economic, development, and security assistance over 5 years to help the Pakistani people achieve their aspirations for a democratic, stable, and prosperous society; and

Whereas the United States remains committed to helping the resilient and resourceful people of Pakistan surmount and recover from this natural disaster: Now, therefore, be it

Resolved, That the House of Representatives–

(1) mourns the significant loss of life, as well as the physical damage, caused by the flooding in Pakistan;

(2) expresses its deepest condolences and sympathy to the families of the victims of the floods, and its solidarity with the millions of affected Pakistanis;

(3) recognizes that Pakistan is and remains a close ally and friend of the United States;

(4) recognizes that an effective and accountable government in Pakistan is essential for the country’s long-term recovery and stability;

(5) urges the United States Administration and the international community, including private citizens and foreign governments, to continue providing assistance to help the people of Pakistan and to help strengthen and support the capacity of the Government of Pakistan to meet the needs of its people;

(6) supports the use of funds authorized by the Enhanced Partnership with Pakistan Act of 2009 for the purposes of providing long-term recovery and rehabilitation for flood-affected areas and populations;

(7) urges a reexamination of priorities for spending the funds authorized by the Enhanced Partnership with Pakistan Act of 2009, with a view toward ensuring that the needs of the Pakistani people are appropriately addressed in the aftermath of the disaster;

(8) commends the relief and recovery actions, still underway, by the United States military, the Department, of State, and USAID to assist the people of Pakistan during this critical period;

(9) commends the extraordinary humanitarian efforts and sustained commitment to helping the people of Pakistan by international and nongovernmental organizations;

(10) recognizes the contributions of the Pakistani-American community and United States businesses to relief and recovery efforts in Pakistan; and

(11) reaffirms the commitment of the people of the United States to partner with the people of Pakistan to respond to the immediate crisis and build the foundations for a successful and lasting recovery.

Richard Holbrooke during his first visit since massive floods in Pakistan has said that his country is completely against martial law and favours continuation of the democratic process in Pakistan. Responding to a question that US had always supported martial laws in the past, Holbrooke said that what happened in the past were mistakes. “We will only support a civilian, democratically elected government,” The BBC quoted Holbrooke, as saying.
Richard Holbrooke also stressed that U.S. support is focused on saving lives, rather than winning hearts and minds or pushing Pakistan to step up operations against al-Qaida and the Taliban, as our right wing media and religious organizations are suggesting.
The Pakistan[corporate] media promotes conspiracy theories day in day out, it’s inane talk shows are selling nothing but hate, bias and prejudice against other nations especially United States and democratic forces, anchors and teleavenglists air abuses and portray US as foe but on the other hand ground reality is completely  different. The people of America always stand with the people of Pakistan through their difficult time and crises ranging from earthquake to floods. US is pleading our case globally-and all support and assistance what we have get from the international community by the efforts of our most trustworthy friend[ America]. America’s “Natural Allies”, Great Britain and Germany were pushing the 27-nation summit to offer Pakistan trade advantages to help the country battle flood devastation and due to their efforts and diplomacy European Union agrees to grant Pakistan trade breaks.

Another dark side of the pakistani media; liberal forces in Pakistan always say it is hard to get their liberal democratic views aired in the mainstream media. John Kerry (the chairman of the US Senate Foreign Relations Committee)rightly pointed out in his article, “A call for help in flood ravaged Pakistan”, that:

“Most Pakistanis receive their news from Urdu-language TV or, for the displaced, from cell phones. We need to target these media more effectively. We need a sophisticated communications strategy tailored to specific audiences — such as lower- to middle-class Punjabis, where the bulk of anti-American, anti-Indian, and pro-Taliban rhetoric is centered; young people, particularly on university campuses where radicalization takes place; and opinion makers in Lahore and Karachi who drive the news cycle, particularly in local languages like Urdu and Pashto. The message also matters; it must resonate with Pakistanis.”