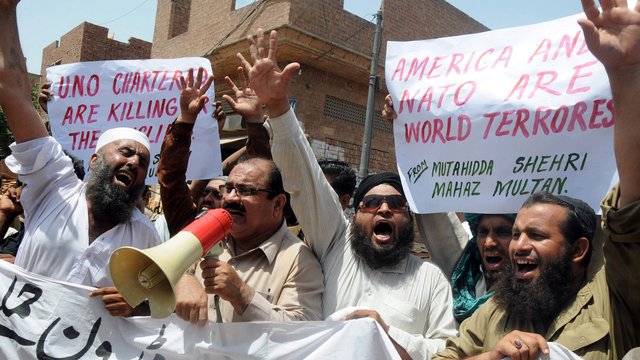 The recent report on drones by Pakistani and non-Pakistani students of Stanford University and New York University raised more questions instead of properly addressing the existing ones.

For instance, the report talks of deleterious psychological effects of drone victims.  While this is a valid concern, how does it full in the purview of legal studies? For every one person killed in drones 15-16 Pakistani citizens, soldiers and policemen have been killed in Indiscriminate suicide bombings and other terrorist attacks by the nexus of Jihadist groups that have taken over North Waziristan.

The drones target these Jihadist militants that are supported and protected by elements within the State.  Innocent women and children are used as human shields by these same militants and their deaths are unacceptable.

But who bears greater responsibility?
Is it just the drone attacks or those cowardly Jihadist militants that use women and children as civilian shields. Like a previous 2009 study, this study also obscures the role of the drone victims drawing stringent categories such as “major Al Qaeda leaders”.

Like the 2009 study, this stringent category probably does not include mass murdering Jihadists like Baitullah Meshud.  Along with issuing death threats to Shaheed Benazir Bhutto which eventually resulted in her assassination along with hundreds of PPP activists in an earlier blast. Baitullah’s TTP has boastfully taken credit for other attacks.  They have owned up to killing thousands of innocent Pakistani civilians. 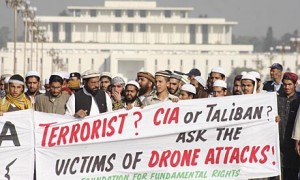 But the report attempts to exclude him just as it ignores that a significant percent of the 2700-3200 victims of drone attacks are foreign militants and are not even Pakistani citizens.  They include transnational Jihadist mercenaries from Xinjiang province, Chechnya, Uzbekistan, Saudis, Jordanians, Egyptians, Libyans and even Britishers and Germans.  Similarly, the various Jihadist and sectarian groups from Punjab and other parts of Pakistan that are also based in this area and allied to Al Qaeda and TTP are excluded!

And this leads us to the most fundamental flaw in this report which is its basic methodology.  As per many sources and indications within the report itself, the drone victim relatives were interviewed in Peshawar and even Islamabad.  Bear in mind that the study relates to North Waziristan.

This is a sampling technique that highlights a clear bias and also casts doubts on the veracity of the interviews.

The report also conveniently excludes crucial facts that only the militants and their minders in North Waziristan have access to that area.  As pointed out on more than one occasion by academics and activists like Farhat Taj, the areas being targeted by drone strikes are not controlled by the Pakistani government. They are controlled by the nexus of the Taliban, Al Qaeda and their Jihadi affiliates like LeJ/ASWJ/JM etc. This is why it has been virtually impossible to determine the exact number of civilian casualties. 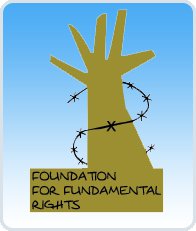 Unfortunately, the entire report reeks of bias which makes it susceptible to increasing methodology errors. All these questions need to be addressed and more arise.

It is in the interests of Jihadist groups to exaggerate civilian casualties for a variety of reasons.  It is vital for maintaining the morale of the Jihadists by refuting actual casualties within their ranks. Similarly, exaggerating civilians casualties is a valuable recruitment tool even if it is a morally reprehensible tactic.  This tactic also has propaganda and advocacy value as it is then used to promote discouraging the United States from going after State-protected militants.

A crucial question is why are Pakistani-American students advocating in favour of the militants?

Who are behind the Foundation for Fundamental Rights and why is their Rights agenda selectively restricted to 3000 drone victims and not the 45000 victims of drone victims! Are their no other human rights issues in Pakistan?

It would be instructive to read what Asad Munir has written about on this topic:

There is no dispute over the fact that drones are violating our sovereignty. The difference in opinion is about the effects and collateral damage caused by these strikes. A large majority of people are of the opinion that these strikes are not helping the counterterrorism effort, are counterproductive and are leading to anger and more violence. Imran khan is of the view that there is a correlation between drone attacks and suicide bombings as such kind of violence started after the first drone strike in 2004. The fact is that there were 413 incidents of violence including 11 suicide bombings before the first drone strike. Terrorist activities have little or no link with drones. In 2009, there were 53 drone attacks and the casualties in the war on terror were 11,704 while in 2010, the number of strikes increased to 117 but the causalities decreased to 7,435.

Drones are violating our sovereignty but so are the foreign militants staying in our country without travel documents and using our soil for terrorist activities. They are the cause for drone attacks. The day they are expelled from our country, in all probability, there will be no drone attack. All kinds of weapons are used in wars; a drone is one of these weapons. Why are Western human right organisations protesting against only drones and not against say, daisy-cutters, artillery, mortars, bombers, IEDs, F-16s and many other weapons that cause more collateral damage than drones? Since the media has no access to drone-affected areas, the casualty figures reported are conflicting, ranging from 2,400 to 3,300. A recent report by the Bureau of Investigative Journalism (TBIJ) claims that 474-881 civilians, including 176 children, have been killed. How does the TBIJ differentiate between a civilian, a terrorist or a facilitator when it does not have the lists of names of members of the Haqqani network, Gul Bahadur and thousands of other Taliban, jihadis or the various sectarian groups operating in the area? On the other hand, people present in the area, having information about the terrorist organisations, their members and facilitators, reject claims of high civilian casualties. Except for three strikes, the other 312 have mostly killed terrorists and their facilitators.

The debate on drones cannot afford to be selective.  No killing tactic can be celebrated or cheered for – whether it is the drones or its targets that include mass suicide bombing Jihadists.  Similarly, a proper debate cannot be framed on faulty data, sampling bias or creating a false binary between the targeted and relatively discriminate drone attacks as opposed to the indiscriminate suicide attacks that target civilians on the basis of religious identity or ethnic affiliation. (Source)

In Khyber Pukhtunkhwa, tens of thousands of Pashtuns have been massacred by the Taliban and the various transnational Al Qaeda mercenaries in the most gruesome manner.  However, for those who selectively condemn drones, the Pashtun is presented as the “noble savage”.  Their lives only have meaning if they agree to be used as Jihadist auxillaries along with the rest of other disenfranchised Pakistanis.  Urban elites will shed some crocodile tears for drone victims but simply ignore the far larger victims of the Taliban. Anti-Pashtun racism anyone.