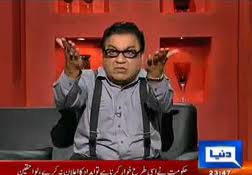 My dear friends at screen, I appreciate your concern for three so called political parties’ hypocrisy. Yet I would like to draw your attention towards a fact that its not the hypocrisy of one political party or three political parties which is paving the path of Musharraf’s come back. Its the favorable situation for any dictator created by the bad governance of these political parties or to the larger extent this rotten political system.

Before commenting on the CJ’s position, let me explain what that favorable situation is? Raise in inflation 300%, Raise in financial misconduct more than 300%, stand against American aggression 0%, Raise in extra judicial killings 100%, the reputation of Punjab and Federal government is to the extent that Zardari is called curruption king and Rana Sana Ullah is called Maulana Sana Ullah Khan Jhangvi, even before Karbla Gamey Shah bombing. The judiciary is corrupt to the extent that Chief Justice of Pakistan had to take a serious notice on that… keep in mind that people backed CJ Iftkhar Muhammad Chauhdri for taking a stand against a Military dictator in uniform and for the rule of law (NOT FOR RESTORATION OF HIS JOB).

These are the demographic factors which allow Altaf of England, chief of a pakistani party which is clearly part and parcel of Pakistan Army; He says that Pakistan needs aRevolution! What made Altaf all of a sudden think that he is some leader of the same caliber of Lenin or Mao or Che Guevara??? Why army is being shown the only savior of the flood victims? Why not the media clearly says that military is not doing any obligation to the nation, the nation pays 63% of their taxes to the Army?So, the wow of Altaf’s Revolution was the first indication of showing the come back of Musharraf with a party named APML that I call All Pakistan Military League. The proof to my argument is that the only political work that Musharraf did was the devolution of power. Now Altaf is demanding to restore the Nazim’s at least for two years. My friends, this is an unseen support to APML having leaders like Pagara, Shaikh Rasheed, Faisal Saleh Hayyat, Mushahid Hussain, former Information Minister (I forgot his name), Khursheed Mehmood Qasoori, Saleem Saif Ullah and above all Sher Afgan Niazi. Sir, Musharraf’s Party is giving political appointments to their workers. See who is the chairman of inter religious Harmoney. He is Mushtaq Victor, former minister and former accuse of human trafficking. Now can article 6 or 62F or ant other from the constitution stop Musharraf? I think NO. Reasons…..1. If the 3rd November Emergency is declared, CJ won’t see the crowd behind him as the people did not get justice from the lower courts…….2. When the constitution is suspended, which article is applicable to Musharraf? 3. The military still rules. They only have to caution “ABOUT TURN” to 111 brigade and two guys with the guns will get inside the presidency and thats all. Proof: The military send the dictator with a guard of honor when article 6 was still there in the constitution. The Long March was sent back from Shahdra after the direct political intervention of Kyani. The military stance on Kerry Lugar Bill is very clear. Why Kyani got 3 years extension…. any solid reason?

Sir, in international scenario Richard Holbrooke has succeeded Bryne Hunt and needless to mention that Holbrooke is the one who through Kyanai gave a safe and honorable passage to Musharraf as he clearly announces that an authoritarian rule is best for the 3rd world countries. Do you expect such leaders to resist Musharraf, backed by Holbrooke, who are in power after signing an NRO. Why article 6, why not a direct 302 case against Musharraf for Benazir murder case???

Sir, the only power that can stop dictators is the people. We have not been able in 64 years to develop a political cadre from the grass root level. If you see it was the people who made the assemblies to pass the resolution against Musharraf, not any political party. If PML-N does not approach to the poor working class, do not give back the lands of Peasants of Okara, do not control Police, do not throw out people like Rana Sana Ullah Khan, trust me, there is another martial law ahead. The policy will be from General Naqvi again. No matter if the face before peple is of Msharraf or Kyanai or Majeed.Please give it a serious thought!

US lawmakers express love and solidarity; is America a friend or foe of Pakistan?
As they say, “Sabr ka phal meetha hota hay” – by Ahmed Iqbalabadi