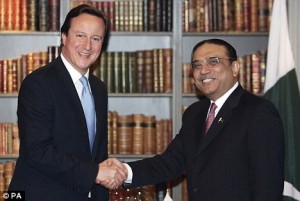 One and half months back, David Cameron said something which as a patriotic Pakistani, I would not have liked to hear. While replying to a question during his visit to India, he warned Pakistan that it should not be allowed “to promote the export of terror” in the world. He said it was intolerable that Pakistan should be allowed to “look both ways”. Thinking later with a cooler frame of mind, I realized, what he had said wasn’t very wrong. But David Cameron’s folly was that he said this on the “enemy’s turf”. Lo and behold, hell broke loose and David Cameron was enemy number one. He replaced President Zardari from the position as enemy number one of Pakistan only for a few days. The president’s visit just a few days later got the worst possible response. There was media tirade, public outcry and near humiliation on the matter. All the president had to say was that bilateral relations are not based on one statement but on policy going forward. Later on, David Cameron’s statement was forgotten and the President’s visit in the aftermath of the devastating floods came into limelight.

Though the president was ridiculed in no less than humiliating manner, we are continuing to witness fruits of his visit to UK. Firstly, Deputy Prime Minister, Nick Clegg visited Pakistan to see for the situation first hand. Resultantly, aid has flown through from UK and infrastructure support has been pledged.

Secondly and more importantly, David Cameron along with his German counterpart are pressing on the European Union to grant trade concessions to Pakistan to help it recover from devastating flood. Till now EU has pledged as much as USD 293 million for Pakistan. If one recalls, both President Zardari and Prime Minister Gilani have repeatedly demanded to give Pakistan the ability to Trade than give us Aid. While meeting David Cameron during his “disastrous” visit to the UK, the President had apprised David Cameron of Pakistan’s needs.

David Cameron’s campaign is being termed as a litmus test for EU policies on providing trade concessions. According to the Financial Times, Cameron would like the EU to reconsider the standards for its Generalised System of Preferences (GSP+) programme, which eliminates tariffs for poor nations that commit themselves to human rights reforms. Under current regulations, Pakistan fails to qualify for the programme, which could add €1bn a year to its exports.

We hope that EU is able to come to a conclusion beneficial for Pakistan. Already, lobbyists against Pakistan are working overtime to sabotage this effort. What we need is internal support and we must rally behind our government. Some people may love to hate President Zardari, but give him credit where it is due. If Pakistan is able to get these concessions, it will be the people of Pakistan who will benefit.

In the end, I personally pray for success of David Cameron’s success and tell the detractors and nadan friends in our media, “Sabr ka phal meetha hota hay” and that “slow, but steady wins the race”.

By Joshua Chaffin in Brussels

An effort to grant trade concessions to Pakistan to help it recover from devastating floods is testing the European Union ambition of executing a more coherent and influential foreign policy.

The debate over what was supposed to be a straightforward humanitarian gesture has revealed the complexity of designing policies in a bloc comprising 27 member states, each with its own national interests, say participants.

“Everybody wants to do something for Pakistan, but the details are very complicated,” a diplomat involved in the discussions said.

Advocates of the concessions, including the UK and Germany, have argued that giving Pakistan preferential access to the EU market would help revive the country’s economy and supplement the €225m ($293m) in immediate humanitarian aid the bloc has pledged.

David Cameron, the UK prime minister, is expected to plead for the EU to go beyond its customary disaster response when he meets fellow heads of government at a European summit in Brussels on Thursday. The gathering is dedicated to the larger question of how the EU can develop a more effective foreign policy.

Mr Cameron would like the EU to reconsider the standards for its Generalised System of Preferences (GSP+) programme, which eliminates tariffs for poor nations that commit themselves to human rights reforms. Under current regulations, Pakistan fails to qualify for the programme, which could add €1bn a year to its exports.

Before the floods, several member states, including Italy, Portugal, France and Poland, resisted an early review of GSP+. They are now expressing reservations about reduced tariffs for Pakistan, according to people familiar with the matter. Their chief concern seems to be that helping the country could come at the expense of their domestic textile industries.

The debate has also opened fissures within the European Commission, the EU’s executive arm. After coming under withering criticism for an underwhelming response to the Haiti earthquake in January, Lady Ashton, the EU foreign policy chief, has emerged as a staunch advocate of trade concessions. Her aides have emphasised Pakistan’s strategic importance in the “war on terror” and the larger security benefits that increased trade could bring.

But many of her EU colleagues, including Karel De Gucht, the trade commissioner, and Antonio Taijani, the industry commissioner, worry that trade is being asked to account for too much of the bloc’s response.

“It is crucial that the Commission give the largest possible support to assist the flood-affected parts of Pakistan,” said Mr Taijani. “But trade is not always the best tool to address a humanitarian crisis.”

Short of changes to GSP+, diplomats are scrambling for less ambitious policy options. One idea would be to request a waiver on tariffs from the World Trade Organisation for a tailored list of Pakistani products. The proposal has so far gained little traction amid fears that competing exporters, such as India and Bangladesh, could challenge it at the WTO.

Another possibility would be for the EU to lower its most-favoured-nation tariffs across the board on a list of products suited to Pakistan. However, that approach would also bring unintended benefits for other countries.

“The problem is that when you open markets for Pakistan, you also open them for China and India,” one diplomat explained.

An analysis carried out by Mr De Gucht’s office revealed that wiping out €55m in annual EU tariffs for Pakistan would also eliminate €40m in similar duties for China and India.