The recent floods are the biggest in the history of Pakistan, and have left more than 1600 people 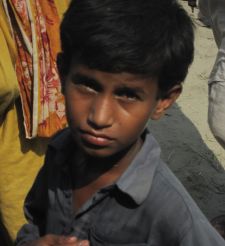 dead and thousands desolate and moth-eaten without a single penny left in their pocket. This has led to an intense call for aid from the world fraternity, and consequently has led to a mushroom growth of hundreds of relief groups who are working in the flood affected areas. Imran Khan Foundation is indeed one of them, and has received lots of media attention for its activities.

The foundation recently asked for volunteers from a host of universities in the country, and it was in this context that a group of 27 students from Lahore University of Management Sciences (LUMS), and Government College University Lahore (GCU) went to visit Khangarh near Muzaffargarh under the banner of Imran Khan Foundation. The pretext given to them was that they would be assisting in the distribution of the relief goods to the flood victims, which was fair enough.

So after an arduous journey of more than 10 hours, with a stop at the Multan residence of the ex-Nawab of Bahawalpur, the entourage at last reached its first destination. Here they were told that they would distribute the goods among the flood victims after a speech from Imran Khan. Two relief trucks were already parked near the vicinity, along with a van from Geo TV, which was understandable as the relief effort is a joint collaboration between Imran Khan and Mir Khalil Foundation, which also runs Geo TV.

A large crowd of 2000-3000 flood victims had already gathered at the site, and all were waiting for Imran Khan. However, what was more disturbing was the fact that the place was filled with more flags of Pakistan Tehreek-e-Insaf than Imran Khan Foundation, giving the place more of a look of a political rally than a relief camp.

The gentleman in question, Imran Khan arrived in a posh car, flanked by local notables, and gave a five-minute speech. This was covered by the media. He then left with his entourage. The media vans also left with him.

However, it was disturbing that the relief good trucks that had been parked outside the camp also left in dust, leaving the crowd of thousands in complete confusion. There were people who had been waiting the whole day for relief goods, and had literally walked five kilometers from their homes to get aid. However, they were left completely bamboozled, and decided to turn to the Bus of the LUMS and GCU students to ask for aid.

They started banging the windows of the bus and crowded around it, asking for aid, showing their ID cards, and telling their individual predicaments. The students were left completely shaken, as even the security had gone away with Imran Khan.

However, at last, all the volunteers barged in to the bus. The driver ignited the engine, and with great difficulty, the crowd subsided and the bus was able to leave the place. The head of the team contacted the representative of the Foundation, and was told to go to the next camp, where the relief goods would be distributed without any explanation as to why the goods were not distributed at the previous camp. The group reached the next camp but was met with the same story. Here a representative of the organization holding a two-barreled gun to subside the crowd told them that there would be no distribution of relief goods that day. Here again they were surrounded by throngs of people who had left barn and home on the eve of dawn just to reach the camp for goods. But there they did not get anything as before.

The group again contacted their Coordinator who told them that the relief goods will be distributed, compounding their confusion as to who to believe. He told them to go to another camp. And the confusion and disarray continued.

To cut the long story short, throughout the day, the group visited camps, but the goods were being distributed nowhere, despite their coordinator telling them the contrary. There was no security, no coordination. At last the Coordinator himself came to the group near the Aftar time and said that he had ordered six trucks, which would come, and then the group can distribute the goods.

The explanation that he gave to the group was that many so-called flood victims were fake, so the Organization had decided to distribute the goods on a home-to-home basis so that it reaches those most in need, and not only those who had gathered at the relief camp. However, it begged the answer that what were the trucks doing in the Imran Khan rally in the first place if the Organization did not intend to distribute good. Was it not a ploy garnered by Imran Khan Foundation to gather a large crowd, get some media attention, and leave without even distributing the goods that they claim to be distributing?

Secondly, what was also strange was the fact that why Imran Khan Foundation had asked for volunteers from LUMS and GCU if they were not there to distribute goods to the flood victims in the relief camps as they had initially been told. Why had they asked volunteers from Lahore to take an arduous journey worth ten hours, if their only worth during the whole trip was to attend the political rally?

Also, what were so many Tehreek-e-Insaaf flags doing in a relief camp run by an organization that claims itself to be above political affiliations? Does this not in itself depict the fact that the organization is being used to garner political support?

And lastly, what does the fact that suddenly the Coordinator turns up with six relief goods trucks near Aftari time, for distribution by the LUMS and GCU students tells you. Does it not in itself contradict his initial statement that relief goods were being distributed on a home-to-home basis?

In the end, it can be said that Imran Khan Foundation may well be doing some very noble work. But it should not tarnish its image by posting large trucks outside its camps to lure people, and not even distribute a single good.

Yes, it looks good in the media to say that volunteers from leading universities like LUMS and GCU are volunteering in the Imran Khan Foundation’s Relief Camps. Imran Khan without a doubt is one of the few charismatic figures still present in Pakistan, who could in essence inspire youth. But what will youth think of him after such experiences?