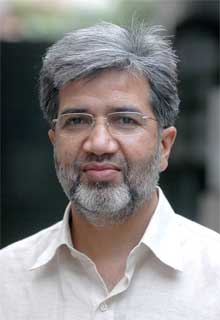 Even “yellow journalists” would be insulted to be in the same category as the Jang Group. A media group that has always promoted the interests of dictators, bigots and fascists has been at the forefront in maligning the current elected PPP-led government. The news item, ” Plot to kill Justice Sharif Unearthed ” (The News, September 11, 2010) smacks of the innuendo, gossip and mendacity or as GEO likes to call it, news! Earlier the same author, i.e. the apex investigative journalist of Pakistan, HE Ansar Abbasi had made himself a laughing stock by filing a report titled “Get CJ Iftikhar operation on the cards“ in June 2010.

The sheer failure and incompetence of the Punjab Provincial Government makes it imperative that they have to rely on the crutches of establishment proxies like the Judiciary and the media. This is a similar instance when GEO’s resident Talibanistas like Ansar Abbasi, indulge in their favorite game of PPP-baiting.

The entire “news” report does not possess an element of substantiated fact that would allow for its preposterous conclusion. The motives listed for ” killing” Justice Sharif are even more laughable. As it is not the way to get rid of him, he is already at the end of his term. PML(N) Govt can not be discredited or embarrassed with such act as everyone knows CJ Sharif’s cordial relations and media sympathies with the Sharifs, and as usually after every act of  terrorism, the blame is shifted on the federal Govt, and federal Govt. will never dig their own grave.

PPP Govt will never commit the mistake of imposing Governor’s Raj as they have learnt from their previous follies.

In fact Sharifs and their counterparts in Judiciary and Lawyers will be benefited as it will be a blessing for them as they will get a ” POLITICAL SHAHEED ” for a new phase of destabilization and dragging through the mud campaign against the federal Govt .

Justice Sharif has openly come out and expressed his anti-Hindu views which could be viewed as a sign of bigotry. Similarly, he has explicitly expressed his anti- PPP  political recommendation. Such views would endear him to the violent sections of society. Far from making him the target of violent criminal elements, such view would endear him to the very Pro Taliban militias and elements.

Off course, in the alternate universe that is being propagated by the likes of the Jang Group and their various subsidiaries like GEO and ARY, the likes of the LHC CJ, Justice Sharif are an anathema to the “Liberal fascists” who control Pakistan!

Having filed his report to be published on Eid day, Ansar Abbasi and his pals like Ahmed Noorani have been making rounds amongst PPP’s 3rd tier leadership such as district and provincial level leaders by calling them up, sending SMS and asking questions whose answers can only try to substantiate Ansar Abbasi’s story.

The questions that are being asked include: linking a certain Babar Sindhu to the President and asking them if Babar Sindhu has been tasked to kill CJ Sharif and that this Babar Sindhu has gotten criminal elements released from prisons to carry out the task. Some office bearers have also been harrassed by asking them questions about calls being received on their phones and money being transferred to their accounts and vehicles provided to carry such tasks.

First and foremost EVEN if there is such a plan, no one will ever admit it. Why do Ansar Abbasi and his gang come up with stories that are only there to keep them in the news? If you can’t substantiate such stories, why come up with them? I feel that stories will be published as a follow up to the Eid day story on 14th September. Whatever the story it will be, it will for sure be full of innuendo and 2+2=22 kind of version by the leading yellow journalists group called Jang Group.

ISLAMABAD: Special Branch Punjab, the leading provincial intelligence outfit, has generated a horrific report about an alleged plot prepared by some top federal figures to assassinate the Honorable Chief Justice Lahore High Court Khawaja Muhammad Sharif, it is learnt. Credible Punjab government sources confided to The News that the report has been immediately shared with the ISI to cross-check its credibility whereas the Punjab Police and counter terrorism department have been asked to immediately launch an operation against those identified in the report as “hired assassins”.

The Inspector General Punjab, according to the source, personally visited the Honorable Chief Justice and informed him of the alleged plot. Chief Minister Punjab, the source said, has directed the police to take all possible measures for the safety and security of the top judge of the province. Three key federal authorities have been named in the report as the plotters however; this newspaper is not unveiling them because of the sensitivities involved and also for the reason that at this stage the disclosure of their names would be premature. The report also contains the names of the hired assassins but this information is being withheld by The News on the request of the source, who insisted that the disclosure of their names would make it hard for the provincial government to get hold of them.

The report titled “PLAN TO ELIMINATE A VALUE TARGET” was recently submitted to the Chief Minister Punjab Shahbaz Sharif as “Most Immediate” and “For the CM’s eyes only”. The source of this shocking information has been identified by the agency as “a dependable source”.

The three-page intelligence report gives all the necessary details about the plotters as well as the hired assassins. It has also identified a “special cell” created by the plotters to execute the assassination plan.

The plot envisages hiring of hardened criminals, who are likely to make a murderous attempt on the CJ LHC during his visit to ancestral house at Tape Road, backside of Veterinary Hospital Lahore, where he comes on the last Friday of every month and holds a Milad function from Asar to Maghrib. “Since a large number of people attend the Milad and the security measures on the occasion are not adequate, the criminals are expected to target the CJ LHC here,” the report warned. The report revealed that a person, involved in judge’s murder case but acquitted recently and considered closely associated with a key federal figure, got released some of diehard criminals (all named in the report) and constituted a gang of criminals/hired murders. All the gang members have a long criminal history and background. The report also reflected on their hideouts. The report also revealed that in an important official residence, a special cell is working on the formulation of another team of criminals (whose names are also included in the report). The criminals, identified in the report, are said to be regular visitors of the important official residence. These criminals are also said to be trying to get released some more criminals from jail. A federal minister, who is amongst the alleged plotters, according to the report, views that CJ LHC is close to Mian brothers and considers him as an obstacle in furtherance of PPP’s objectives/designs in Punjab.

“By achieving the said high profile objective, PPP will gain the following:

(i) Getting rid of CJ LHC Khwaja Muhammad Sharif;

ii) Embarrassment to government of Punjab in judiciary;

iii) Discredit the PML-N government in the eyes of public, media, lawyers etc; and

iv) Pave way for enforcing Governor Rule in Punjab by propagating that the government has failed to check terrorism in an effective manner.

The report sought from the government to beef up the security measures of the CJ LHC besides putting a close watch on the activities of the aforementioned criminal elements.