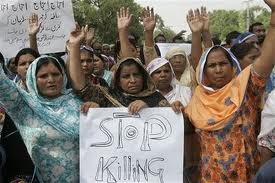 There is fear and apprehension among Christians in Pakistan as the country celebrates the end of the Muslim observance of Ramadan.News of Holly Quran Burning Day in the U.S. by a Pentecostal priest  in Florida has led to tension, protests, and threats against the Christian minority, which, in most cases, have not degenerated into open violence.

“Thanks, above all, to the rapid intervention of the police, who took emergency measures to protect the churches,” said Fr. Robert McCulloch, a Catholic missionary stationed in Hyderabad. The day of Eid al Fitr, which marks the end of Ramadan on September 11, was generally peaceful in the country, and many Muslims celebrated it with solidarity initiatives for flood victims.

Even while some anti-Christian violence has not had serious consequences, a Christian church was attacked by a hail of stones in Daska in the Catholic Archdiocese of Lahore. In addition, three churches were threatened in the town of Narowal, also to the north of Lahore.

In some areas, however, tension remains high. In Karachi, the local Catholic community is still shaken by the attack suffered in recent days by Asghar Bhatti, 61, a lay Catholic and family man, and a member of the St. Paul parish. Bhatti was wounded by two gunshots fired by two radical Islamic militants just outside the church. “It’s a miracle he’s alive. They wanted to kill him and he got away with two shots to the shoulder. He is now in the hospital,” said Fr. Saleh Diego, the pastor of St. Paul’s and Chancellor of the Diocese.

“We are very concerned. It seems to me to be a serious act of intimidation. Asghar Bhatti is very active in lay ministry and used to visit the homes and families of parishioners. It is a warning to all Catholics, to discourage or prevent them from preaching and put a damper on pastoral activity,” said the priest, demanding greater police protection in order to stop the extremists. “We are helpless and defenseless against these attacks. Asgahr is only alive by the grace of God.” The pastor has informed the Bishop, while a delegation of Christian leaders of Karachi have met with representatives of the Muslim party “Jamaat-e-Islami,” asking for support and underlining the apprehension of the Christian community.

The Catholic community of the Parish of St. Paul, in the meantime, is very active in assisting the refugees who have flocked in thousands to the city of Karachi. The southern part of Sindh is still affected by torrential rains that worsen the situation. The road between Karachi and Hyderabad is flooded and this makes things even more difficult for the rescue operations. According to local sources, some 3 million refugees in Sindh and southern Punjab have not received any humanitarian assistance.