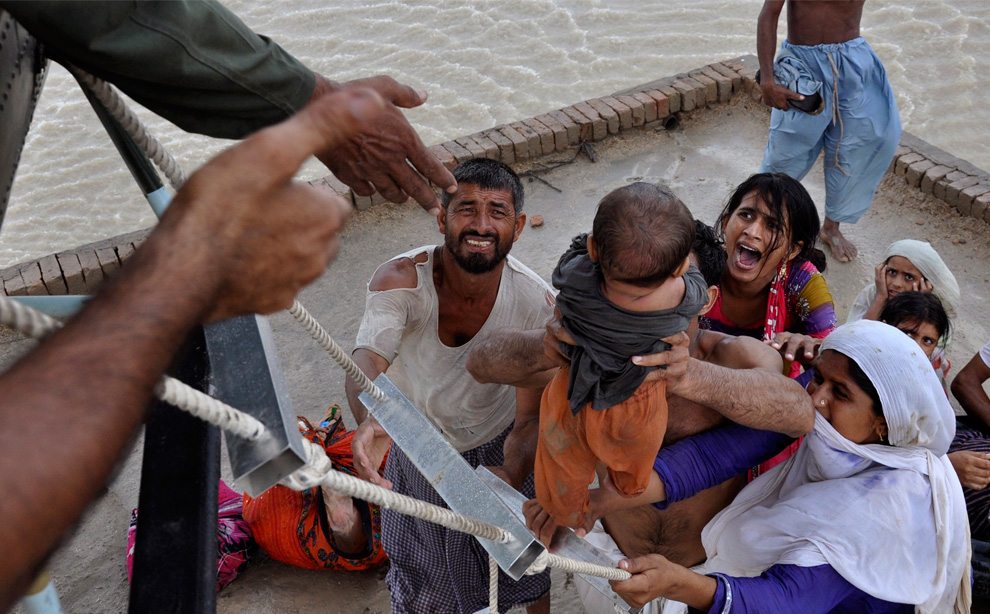 “A woman yells as her child is evacuated from the roof of a mosque where residents were taking refuge from flood waters in Sanawa, Pakistan on August 5, 2010.” Photo/Reuters/Stringer/Boston Globe


Following the bloody partition of the Indian sub-continent in 1947, both India and Pakistan have wasted the few opportunities that came their way in order to end the bitter animosity generated and later enhanced, due to the bloody division.

The war on terror and the barbaric acts of some Muslim militant groups in Pakistan have provided the news media with such bias against all Pakistanis that it has almost convinced the un- or ill-informed world that all Pakistanis are involved in terror. This has resulted in reluctance on part of the donors to see the affected people as struggling humans in need of help.

Another major factor deterring the would-be aid givers is the alleged corruption of Pakistani leadership and the army’s covert/overt presence. One may understand the Western lethargy on account of the above facts. It is painful, however, to witness this same stand taken by India. It’s distressing that the heart wrenching videos and photos of the flood victims have not stirred Indians enough to have compassion and help their neighbor.

India’s earlier pledge to Pakistan of 5 million US dollars has now been raised to 25 million.  India and Indians can do much more than this half  hearted gesture. If it can pay over a million dollars to A. R. Rahman for composing a less than five minute anthem for the forthcoming Commonwealth Games, than it surely can do much more in alleviating the unprecedented and intense suffering of its neighbor. Pakistan is in dire need of major assistance because the destruction is more devastating than the 2004 Tsunami, 2005 Kashmir earthquake, and 2010 Haiti earthquake combined.


The United States in trying to improve its image is extending some help to the flood victims but in no way on the scale needed. Once its expected objective is achieved, it will pack up its weapons and soldiers and leave. For India, there is much more at stake. Pakistan and India are conjoined and are bound to live side by side—unless a cataclysmic event such as the Continental Drift separates them.

People in the entertainment industry and from the business community in India are careful not to arouse the the right winger wrath. Currently, in India the BJP (Bharatiya Janata Party) is trying to revive the Babri Masjid ghost once again. Nevertheless, the film fraternity (Mumbai and the south), fashion industry, TV personalities, and sportspersons should come forward and arrange aid concerts, shows, and matches for the benefit of the victims. Most Pakistanis support their work passionately. According to Pakistani cinema owners, the Indian film, My Name is Khan (2010), “was the highest-earning film ever to screen in Pakistan.”

This is also the time for the business community to show some generosity by opening up their coffers. Of course, they should consider it as an investment. The trade between both countries is on the rise and so the money donated can be earned back.

India should not squander this golden opportunity to improve its image and simultaneously improve the relationship between the two neighbors. It should avail the opportunity before it is too late and the suffering cycle of the majority of Indians and Pakistanis experienced for more than six decades continues unabated. This is an opportunity to begin a new era of genuine help and cooperation, especially when encountering such major crisis.

Click here to post a comment
We look forward to the follow up story to the plot to kill Justice Sharif- by Chaudry Ahmad Khan and Ahmad Iqbalabadi
Rehman Malik, who do you represent? – by Imtiaz Baloch