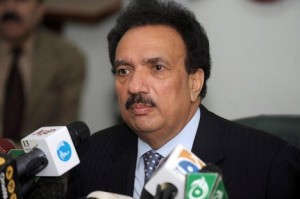 While Rehman Malik statements regarding the peace process in Balochistan of threatening aggrieved Baloch elements of using more force was responded by the sensible Baloch political leadership as Sardar Akhtar Jan Mengal and Senator Mir Hasil Khan Bizenjo,  Newspaper presenting Baloch perspective as well as the national media as Dailytimes and Dawn, even the Govt. of  Balochistan, has backtracked and disowned the decisions made by him.

While reacting to the adventurism of the Interior Minister , human rights activists Imtiaz Baloch  and spoke person of Baloch Human Rights Council Canada(BHRCC) has sent this piece to be posted on LUBP. To produce his views to our readers we are posting his article unedited. LUBP not necesserily agree to his whole POV.(aliarqam)

The Baloch massacre-Answer to Rehman Malik

Once I asked Baloch leader and former Balochistan Governor the late Mir Ghous Bux Bizenjo what were the reasons that Pakistani army killed Bhutto. The wise man replied that:

“Bhutto signed his death warrant the day he dismissed the secular and progressive N.A.P. (National Awami Party)  government in the early 70s and started the military operation in Balochistan, massacring thousands of Baloch. He made a death wish the day he declared Ahmadis non Muslims and went and sat on lap of the Islamists.”

As if history is rpeating itself, today under the  PPP government, jihadist organizations are being pampered, Ahmedi mosques are being torched, shias are being killed, Christian villages are being burnt to ashes and the army is engaged in a blood bath in Balochistan.. They say that those who do not learn from history are condemned to repeat it. This time it would be the whole PPP as a party signing off its political death warrant, along with the leadership to the Pakistan army generals.

The recent history of Pakistan shows that myopia is a collective folly for the establishment of the God forsaken country. Interior Minister, Rehman Malik showed his utter insensitivity to the Baloch people Wednesday when he announced  intensification of the ongoing military operation by expanding the role of Frontier Corps and intelligence agencies, transferring all administrative powers to the Frontier Corps (F.C.) in Balochistan and to ban Baloch Student Organization Azad and resistance organizations. This bully mindset is a legacy of the Pakistani establishment which the PPP government is continuing with, despite all its tall promises and sugar-coatied packages. Malik’s latest  threat confirms that the PPP government is no different than the previous dictatorship of “Pakistani Pinochet” General Musharraf. The chief minister of Balochistan, Nawab Aslam Raisani, has repeatedly complained that his government is being surpassed by the military establishment and has accused the Pakistani army of running a parallel government in Balochistan. He is bitter the F.C.deems itself above the elected political authorities.

Some time back the police chief of Quetta, Shabir Sheikh, announced in a news conference that every targeted killing of a settler would be matched with target killing of a Baloch. This announcement of the police chief was not a bluff but meant serious business. Leading Baloch intellectuals, experienced political workers, trade unions, journalists, doctors, teachers, poets, lawyers and students are being forcefully disappeared and within twenty days their dead bodies are dumped in the open, with marks of brutal torture.

This week one more prominent lawyer of the Balochistan High Court, Mr Zaman Khan Marri who was forcefully abducted by the Military Intelligence on 19th August 2010 near his law office on Jinnah Road Quetta, was found dead on a street in Mastung with brutal marks of torture and a bullet hole in his head. Marri’s fault was his voluntary help for the Baloch victims of enforced disappearances; two weeks ago two bullet-riddled bodies, later on identified as  Mohammad Omer Baloch and Arz Mohammad Pirkani, both resident of  Quetta, were found in similar circumstances. According to the families of these innocent victims, the two were abducted 20 days ago by the Pakistani intelligence agencies. This brought the total to 15 extra judicial killings of victims of enforced disappearances in a short span of two weeks.  At the time even when the Punjab-based jihadist outfits such as the notorious Jamat Dawa and infamous Lashker-i-Taiba are on a killing spree against the minority Shias, Ahmedis and Christians, Pakistani Army has given them a free hand to operate and remain at the forefront of the flood relief efforts.

These organizations are not only fortifying their organizational base but also recruiting new members.

Unfortunately, all this is being made possible with the monies coming from the West in name of foreign aid. The jihadi organizations, who are indirect beneficiaries of the Western dole outs, carried out deadly attacks against the Shia minority in Quetta last week that left almost one hundred dead. Instead of resolving to operate against these extremists, Malik tried to divert the world attention away from the havoc caused by these jihadists and announced plans to have a fresh bloodbath in Balochistan against the secular Baloch forces.

Pakistan is guilty under Article II, part C of the United Nations Genocide Convention, in that it intends to destroy, in whole or in part, an ethnic group by ‘deliberately inflicting on the group conditions of life calculated to bring about its physical destruction in whole or in part.’ Physical destruction means not only physical annihilation, but the destruction of their political leadership and civic institutions and the attempt to prevent them to reproduce themselves through the generations as a sovereign people.

The massacre in Balochistan cries out for immediate condemnation.

It is quite clear to us that Pakistan, like white Australia since 1788, is a genocidal settler colonial society that since its inception has sought to destroy the foundations of life of the indigenous Baloch, closing the door to health, human dignity, decent livelihood and personal safety on them, blocking access to education, and undermining their political organizations, so that the Baloch can be replaced in their homeland of Balochistan by colonizing jihadi Pakistani settlers who are faithful to Pakistan’s fundamentalist Islamic ideology.

But the Baloch want to remind the Pakistani military establishment that Baloch mothers would keep giving birth with pride to more Balach, Jalib, Ghulam Mohammad and Zaman Marri, who would not only defeat all evil designs of Pakistani establishment but put an end to illegal occupation of  Balochistan.

Pakistan’s occupation of Balochistan is not only a return to the age of classical colonialism, it is much worse than that. It is something very low, more vulgar, more brutish, more humiliating and therefore much more bestial and dangerous — dangerous to Baloch, and of course to humanity at large. (Balochistan is a Texas size state occupied by Pakistan on March 27 1948. This is the fifth Baloch uprising against Pakistani brutal military regime)

(Balochistan is a Texas size state occupied by Pakistan in the year 1948. This is the fifth Baloch uprising against Pakistani brutal military regime)