Note:-Though the proposal of Nawaz Sharif Commsion has become an old story but the statement of Mr. Rana Sanaullah in “Point Blank” as reported in the Daily Express has left me shocked therefore with an apology, I am compelled to unveil a proposal.

Afshan Ahmed sang beautifully “Mere Bacpan ke din Kitne ache the din, Aj bethe Bithae kiun yaad a gae.” So was the case with me. I also remember an old childhood fable called “The wolf and the lamb.” It was about a lamb and a wolf. With intentions to hunt him down, the wolf created allegations, allegation of the lamb contaminating the water whereas he stood on the lower side. Allegations of him abusing the wolf two years ago where as he six months old himself, allegations of him setting up conspiracies where as he did not know about it. When all traps failed the wolf said, “well if not you it must be your elder brother or your father” and off went the lamb’s head. It all just sets up perfectly. The “political actors” are wolves bombarding the Elected President and the Government with intentions to hunt them down. The Elected Government and the President seem to be busy rejecting all allegations with the logic but the wolf insists on being awarded a slightest chance. (Thanks to Mard e Huur they don’t dare to attack, though they even applied the last tactic of if not you then it’s your father, few months ago by re-initiating bogus trial against Hakim Ali Zardari, but due to its failure the bombardment continues. The sole objective being to hunt the PPP). Our 21st century wolves seem to be much more creative and experts in carving allegations in the name of ethics. Here I dig out a latest edition of their allegations.

It was around mid of July when severe rains hit Pakistan with its entire strength and the historical flood rushed through the motherland with all its destruction and repercussions. On one hand where it was a calamity having no comparison, on the other hand came a Golden Opportunity in disguise for the pack of wolves. This is where the story begins from. Hardly a day or so had passed and the Allegation Brigade was off to their new detachment. After the appetizer of criticism on President’s visit and PM’s election campaign and finding it worthless (As the President donated 2.5 million from his pocket and so did the PM cancel the Urs of his father and donated money to the flood affected areas expressing their dedication to the cause) the Brigade decided to move on the track of Credibility.

It seemed to be a yellow fever which took over towns, cities and whole country in no time. Each and every political actor was shouting at the peak of his voice about the shattered credibility of democracy. “One Penny, One Penny”, was their beloved phrase. No one in the world believes in these corrupt politicians, no one has confidence over 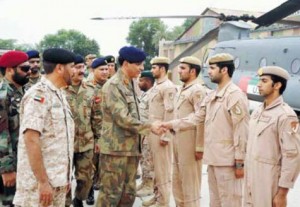 democracy, no one will give away even “A Penny” and like professional quacks they did not restrict to the diagnosis of poor, ill Pakistan but also came out with the perfect medication “Salute to Pakistan Army”. The only credible organization of Pakistan in their knowledge was Pakistan Army and the solution to floods was a martial law. Pathetic assessments were made about the comparison of 2005 global response and 2010 global response. Keeping the Humanitarian Loss, Geo-Strategic situation and Global factors all aside, it was claimed that the lack of global response is due to the poor credibility of the elected government while Pakistan Army is the organization which holds confidence in the hearts of the international community. Thanks to Mr. Robert Right that in his essay he revealed the actual reasons for the lack of international response and  double thanks to Kashmir Watch which revealed the corruption of Pakistan Army and its bureaucracy in the 2005 relief funds and revealed the fact that it was Pakistan Army and its sub divisions which were discredited by the International Community (Kerry Luger Bill is an evident example of lack of confidence over Pakistan Army by the U.S Congress itself.)

This mega-conspiracy convoy lost track before reaching the objective “Go Democracy.” The “One Penny” theory started losing its charm right after the President’s visit brought about millions to the country and the international community stepped forward to assist Pakistan. The theory finally died on the 21st day of August 2010 as the sixty third special session of the United Nations General Assembly responded to appeal of 450 million dollars by a pledge of 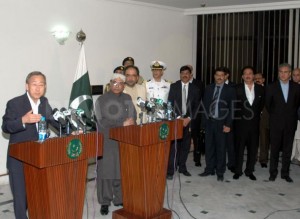 800 million dollars, almost double of what was demanded. Had there been a slightest amount of dignity in the political actors they would have spent the rest of their lives flying kites instead of carving speculations but let us not forget the myth of the wolves. One allegation missed, fire another one. 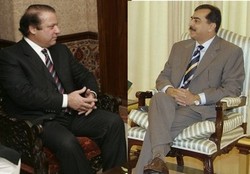 This is the very point from where Mr. Nawaz Sharif jumped in. In a meeting with the Prime Minister which was actually under the agenda of No-Politics in flood he came out with the brilliant idea of proposition of a “Flood Commission.” On one hand while he denied being sympathizer of any politics during the flood on the other hand he very smartly made a move of dis-crediting the government by proposing a “Commission” of people of “Good Reputation” who would coordinate all the funds. This was a clear indication that the Government is not eligible of being trusted and neither has the credibility to fight calamities without taking sides (Strangely the accusations were against the government which had just under taken the challenge of rehabilitation of IDPs in Swat and had received a world wide appreciation).

Trusting technocrats like Justice(R) Rana Bhagwan Das and Justice(R) Fakhrudin G Ibrahim (With all due respect to these personalities) instead of the elected government was a clear proposition of the Bangladesh Model. Our always positive PM Gillani agreed with the proposition without going into the depths of its repercussions as he is always up-to the positive ends. As soon as the news broke, the political actors were on their way calling the proposition “Nawaz Commission” and evidently the credit was flying away from the government floors. What became of the “Nawaz Commission” was nothing unexpected this was to be the fate of any Bangladesh Model in a Parliamentary Rule but this fate was an opportunity in disguise for the pack of wolves since that day the PPPP is on the mark of these wolves and the blame game is on it’s verge.

A realistic view of “Nawaz Commsion” reveals that this proposition was never capable of being applicable. Even if I don’t consider it a preplanned trap I would regard it as a proposition of a self centered man who has no concerns over the up-righting of mandate. In saying so am not being biased but I have closely monitored the matter.

Such a proposal in a democratic era was meant for nothing but rejection due to the draw backs it brought along with it. So was its fate. On the 20th of August 2010 when the proposal was put before the Federating Units and was expectantly slammed down. The provinces slammed down any proposal which was to intervene in their jurisdiction. PML-N President Shahbaz Sharif being a part of meeting was reported stunned by the news papers. Realizing the fact that the Federating units are not inclined to his proposal Mr. Nawaz Sharif should have respected the up-righting of the Federation but expecting a realistic approach from the guy who amended the Constitution in 2.5 minutes during his regime without taking any one into prior confidence, was a mere imagination. The moment proposal got slammed down the pack of wolves sniffed a bright new idea. Political Actors were unleashed on the all times favorite target Asif Ali Zardari. The very next moment ties were being linked to the Presidency and analysts were busy unfolding the conspiracy of the President. Though the announcement of the NODMC (National Oversight Disaster Management Council) was a productive step which included members from each Federating Unit (Automatically Each Party) to observe and monitor the use of resources in rehabilitation of effected population, was quite enough to calm down compensate PML-N for its proposal but who leaves a bird in the hand. The continuous bashing of PPPP and Asif Ali Zardari was so storming that the matter seemed never to end up. It seemed that the Punjab based party will never accept the rejection of its proposal by the Federation.

One question just went unasked in all these days was this Commission Proposal a principled stance of PML-N and was it hell of serious about the Federal regulation of the funds or was just hit around strategy. Thanks to Mr. Rana Sanna Ullah the Minister for Law in Punjab and the darling of PML-N that in his childish innocence he gave away the secret of the Principled Stance. In an interview with Mubashir Lucman he said that “In our Perception the Funds must be utilized via Provinces.” After reading out this statement, I have repeatedly compared  it with those of Mr. Nawaz 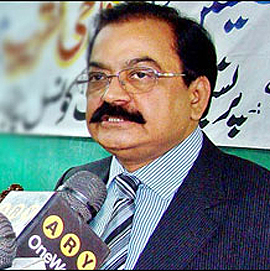 Sharif, Mr. Chaudhry Nisar Ali Khan and Mr. Khwaja Ishaq Dar but with immense hard work I couldn’t find a slightest similarity between the two stances. On one side the PML-N demands the Federal Regulation of Funds whereas on the other hand the same PML-N demands the Provincial Regulation of Fund. It is hard to claim that whether the PML-N has spotted a split in itself i.e a revolution against the dictatorial stances of Mr. Nawaz Sharif or has it been revealed that the former stance was a well disguised conspiracy against the PPP with prior knowledge that this proposal shall be an ideal case of “look busy, do nothing”. Whatever it might be but after this statement the Tale of A Commission has come a tragic end. Another Wolfy accusation has failed out and we are looking towards more.