LUBP has previously reported that, barring one or two exceptions, the quality of foreign correspondent in Pakistan is really disappointing. We explained that many foreign correspondents in Islamabad, Lahore, Karachi etc remain surrounded and influenced by a tight club of Pakistani journalists many of whom are nothing but propagandists of Pakistan’s military establishment. These, loyalist to the establishment, journalists keep circulating and reinforcing its preferred discourses on various local and international matters, e.g., war on terror, Kashmir, Afghanistan, Taliban, religious extremism, persecution and target killing of religious and ethnic minorities etc.

However, what is even more disappointing is the way in which Pakistan’s local newspapers recycle the substandard reports and despatches distributed by foreign news agencies.

Let me present a recent example to explain my argument.

It is now a well established fact that the slow motion Shia genocide (19,000 killed so far) at the hands of Pakistani-State sponsored radicalized Deobandi-Wahhabi militants cannot be described as Sunni-Shia sectarian violence. We have previously explained that the same terrorists (Lashkar-e-Jhangvi, Sipah-e-Sahaba, Taliban, Jundullah etc) who have killed thousands of Shiites in Pakistan have also killed thousands of Sunnis and dozens of Ahmadis, Christians etc. Thus, terrorist activities by fringe Deobandi-Wahhabi terrorists against Shias and other target killed groups must not be described as Sunni-Shia sectarian violence. Sectarian violence, per se, is a false neutral term. For example, it will be both inaccurate and dishonest to describe the Holocaust by Nazis as a sectarian conflict or violence.

However, most foreign correspondents and agencies misreport Shia genocide in Pakistan as Sunni-Shia sectarian conflict or violence (or in some other instances misrepresent it as a Hazara specific ethnic issue). The sectarian violence or conflict is a preferred discourse of Pakistan army because it hides Pakistan army’s complicity because of its support to its Jihadist assets (LeJ, SSP, Taliban etc) which are causing collateral damage within Pakistan (by killing Shiites, Sunni Barelvis, Ahmadis, Christians etc).

Agence France-Presse (AFP), the French news agency, the oldest the world, and one of the three largest with Associated Press and Reuters, is no exception when it comes to misreporting Shia genocide in Pakistan. (AP and Reuters are no better either.)

On 30 August 2012, a Shiite session judge Zulfiqar naqvi was killed by the extremist Deobandi terrorists (LeJ) in Quetta. The tragedy was also reported by LUBP: ISI-sponsored Baloch Jundullah-LeJ terrorists kill Shia judge, guard, driver in Quetta. However, instead of describing it as yet another atrocity against Shiite Muslims by State-sponsored LeJ Doebandis, the AFP correspondent placed the blame on Sunni Muslims by describing it as an incident of Sunni-Shia sectarian conflict. This is wrong on several accounts not least because it offers legitimacy to LeJ Deobandi terrorists who are disowned by majority of peaceful Sunnis but also because it covers up the State’s sinister support to Jihadi-sectarian militants.

Here are a few screenshot from four Pakistani newspapers, Dawn, Expresss Tribune, Pakistan Today and Newsweek Pakistan. All four of them have uncritically and insensitively recycled and published the garbage distributed by the AFP. 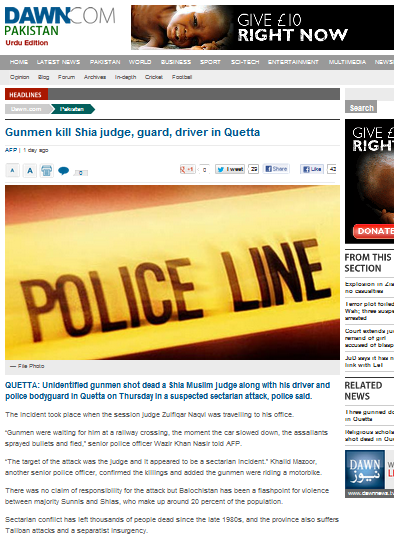 There was no claim of responsibility for the attack but Balochistan has been a flashpoint for violence between majority Sunnis and Shias, who make up around 20 percent of the population.

There was no claim of responsibility for the attack but Balochistan, which borders Iran and Afghanistan, has been a flashpoint for violence between majority Sunni and Shia, who make up around 20 percent of the population.
Sectarian conflict has left thousands of people dead since the late 1980s.

There was no claim of responsibility for the attack but Balochistan, which borders Iran and Afghanistan, has been a flashpoint for violence between majority Sunnis and Shias, who make up around 20 percent of the population. Sectarian conflict has left thousands of people dead since the late 1980s. 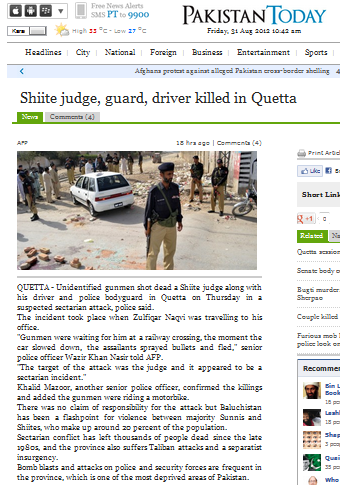 There was no claim of responsibility for the attack but Baluchistan has been a flashpoint for violence between majority Sunnis and Shiites, who make up around 20 percent of the population.
Sectarian conflict has left thousands of people dead since the late 1980s, and the province also suffers Taliban attacks and a separatist insurgency.

The common source in all of the misrepresentations reported above is AFP.

We would like to know why AFP is misrepresenting LeJ-Jundullah-Taliban terrorists as Sunnis, and also why Shia genocide by State-sponsored Jihadi-sectarian militants is being misreported as Sunni-Shia sectarian violence?

We also wish to know why do local Pakistani newspapers have to rely on a foreign news agency (AFP) to publish inaccurate and misrepresenting news from Pakistan?

We ask AFP, Pakistani newspapers as well as certain army-frinedly think tanks (e.g., Jinnah Institute) to stop misrepresenting State-sponsored Shia genocide as Sunni-Shia sectarian violence. Also, they must not paint LeJ-ASWJ terrorists as Sunni Muslims. Sunni Muslims have nothing to do with those who are killing Shiites, Sunni Barelvis, moderate Deobandis, Ahmadis, Christians etc. Terrorism by State-sponsored Jihadi-sectarian militants must not be reported as Sunni-Shia sectarian violence.

We hope that editors of the AFP and the Pakistanis newspapers will consider this post, and refrain from misreporting Shia genocide in Pakistan as Sunni-Shia sectarian conflict. We also hope Pakistani newspapers will show a tad more professional and critical approach instead of blindly publishing all what is being distributed to them by foreign news agencies.