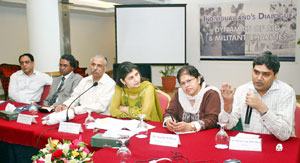 Pakistan has seen its most deadly catastrophe in the shape of these recent floods. Being a country marred with all sorts of problems, the magnitude of the disaster left the government paralyzed. International community came forward and offered help in such difficult times for saving precious lives. On one hand where people are desperate for help, there are some desperate for glorification which are the banned militant outfits.
Speakers at a seminar on “Dynamics of Aid and Militant Charities” have said that some banned militant outfits are desperate to earn glorification during the flood catastrophe.
Gulmina Bilal Ahmed (Director, Individualland Pakistan) said in her starting remarks that we have seen how these militant outfits disguise as charity units and win sympathies. The 2005 post-earthquake scenario is full of such examples. The way these organizations are working in the flood affected areas is a worrying point. The situation can be exploited by them at any stage.

“The way these organisations are working in the flood-affected areas is a worrying point. The situation can be exploited by them at any stage.”

Ms Gulmina said Pakistan had seen its worst catastrophe in the shape of recent floods. She said the magnitude of the disaster had left the government of country marred by all sorts of problems paralyzed. She said the international community came forward and offered help in such difficult times for saving precious lives.
Mr. Amir  Rana (Executive Director, Pakistan Institute for Peace Studies) while talking at the occasion expressed similar concerns by saying that militants turning into saints in a dangerous trend. It more like a wolf in sheep’s clothing. He pointed out the relief camps set up at different places in different cities operating under different names. He said that it was the responsibility of both civil society and security forces to curtail such elements.
Dr. Ayesha Siddiqa (Defense Analyst) said that the affected people need help. If the militants reach the needy first, they will gain their allegiance in return. This will not do well to us in the “war on terror”. That’s why CSO’s need to work in close collaboration nationally and internationally to address this issue.
Mr. Tariq Parvaz (Former Director, National Counter-Terrorism Authority – NACTA) said that media has portrayed economical limitations of the government as its inefficiency which is not the case. The government is fully mobilized and trying its best to reach out to affected people.
Mr. Wajahat Masood (Senior Journalist Aaj Kaal) said that the people in the affected areas need to be made aware that accepting aid from these militants can have strong repercussions in the future. These affected areas should not become recruiting grounds for the militants.
Participants agreed that efforts need to be made to stop the militant organizations taking part in the relief activities trying to achieve some lost glorification. They stressed that steps at policy level are necessary before these militants sabotage the relief process.
Tags2005 earthquake Charity Federal Govt floods in Pakistan Militants and Militancy Terrorism

Click here to post a comment
The Green Revolution? – By Dr. Ayesha Siddiqa
An act of barbarity: kidnapping and torture of Umar Cheema – by Aamir Mughal