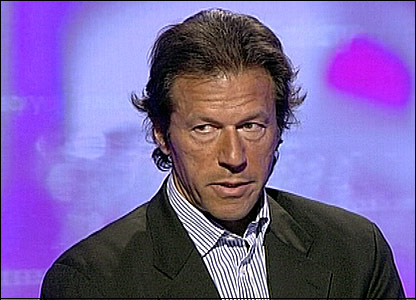 With thanks : Pak Tea House

This article is critical of Imran Khan’s political orientation and tries to introspect middleclass liking for him. It admits Imran’s virtues as a cricketer and philanthropist but argues that his politics is the wrong medicine for the country. It also tries to examine as to why he has not been able to connect with the masses

In Pakistan we, particularly those belonging to relatively more educated and urbanized middleclass, have developed this psyche to find strange solace in other’s miseries and in some rare patches of better times in our history. So when Sialkot lynching occurred, many of us were appalled and shaken to the core and then tried to draw parallels to similar incidences in other countries to bolster our dwindling self esteem. A war of articles started where liberals were described as self loathers and were reminded that such incidences were a norm in other countries. Hence there was no need to worry and be depressed.

And then this scandal broke out and exposed the moral depravity of some of our most talented cricketers on television. Predictably we were first shocked, disgusted and then in an ever familiar way started to look for conspiracy theories to remain in our self created delusional state of denial (and of course link it with corruption of Zardari also!!!). On Express news, actually RAW was cited as the possible culprit ( And their most famous anchor drew parallels to Zardari’s corruption). But deep down we all know that we are actually on a very weak wicket.

Invariably we are also looking towards a rare patch of successful and taintless period of Pakistan cricket much of which was under Imran Khan. Imran is being remembered fondly and as a cricket fan, I can fully understand. Yes those were the days and Pakistan’s cricket team has never been the same after his departure.

The persona of Imran Khan is also in the forefront in flood relief efforts. It is strange that a person who despite being a political minnow commands extraordinary respect in philanthropy. People are willing to entrust him with notes but not with votes.

Sometimes, I really feel disappointed that a person with his education, brilliance as a cricketer and above all his extraordinary services in the field of social work had to take a political direction that I actually have to pray that he never wins.

There is a tendency in the liberal media to lynch Imran Khan (Mr. Nadeem Farooq Paracha it seems has made it a passion of his life) and to some extent it is well deserved also. But let’s not forget that despite his reactionary political orientation, his contributions to Pakistan are enormous. In many ways Imran Khan is Pakistan’s asset and someone who has dedicated his life to this country.  And here lies the irony that a squeaky clean person with an impeccable record, if elected, will be the one of the worst nightmares for Pakistan.

Personally Imran is the embodiment of good aspects of upper middle class morality such as professional integrity, fairness and self pride. But politically he embodies whatever is wrong with the same class.

Self respect when projected on the political horizon becomes almost naïve delusional state of denial further reinforced by slogans like “Qaumi Ghairat”. Although Imran has not been the conspiracy theorist but suffers from another somewhat related ailment of coming up with apologetic defense of extremism. Both of these “diseases” (conspiracy theories and apologetic defense) are broadly similar outcomes of immense self delusional pride rooted in ideologically determined identity which makes it difficult to find flaws in one’s own culture and tribe particularly when these are under the critical microscope of the others. The middleclass, particularly the upper segment suffers from a strange twisted envy of the West where it follows western fashions and prefers their luxury goods and lifestyles while being ferociously defensive about its own identity defined in terms of religion and Pakistani nationalism.

In Imran’s case also the western lifestyle fuses with the strange and immense self pride which extends to include the domestic culture and fails to even see some of its blatant shortcomings. In fact the brutal “justice” system of tribal areas is construed as fair and impartial. Taliban despite atrocities openly committed and then claimed by them are given apologetic defense of “reaction” against USA’s atrocities and drone attacks despite killing militants are interpreted as a violation of sovereignty.

This class which is dominant in Media, Corporate Sector, and all the “establishment” institutions is more conscious about its identity defined in terms of religion and Pakistani nationalism and has a stronger ideological fervor. It will ape West in the desire to be more sophisticated and modern and at the same time retaliate when there is some backlash on ideological front and identity. Even the most sophisticated and foreign educated ones belonging to this class  write articles like “liberal lynch Mob” and are appropriately labeled as “designer patriots”!!

Other than “National Sovereignty”, corruption becomes another obsessive concern of this class. Real or perceived corruption of the politicians is debated like hell in the drawing rooms ranging from Karachi to Islamabad.  Of course Zardari is perceived as a corruption king and all the ills of the society are attributed to him. Imran khan once again voices that “concern” with utmost zeal on the media and is often perceived as the savior of the country by the same media watching middleclass. In fact if elections were held on internet, he would be a straight winner!!! I am categorically mentioning internet because frankly this class seldom bothers to stand up in the queue and actually vote! On social networking sites like Facebook the young and more sophisticated of this class regularly make Imran Khan the Prime Minister.

Imran, more than anyone else, symbolizes the middle and upper middleclass morality, its sophistication and its strange contradictions. And no wonder, he is well liked by the same class. This class is sympathetic towards the plight of the poor but is still yet unable to engage with them. Their attitude is more of patronizing rather than equality and once again Imran more than anyone else embodies it. After all despite doing extraordinary work in the field of philanthropy, the poor are the ones who despite respecting him cannot associate with him politically. Politics, particularly modern politics is strongly intertwined with connection and engagement. Successful politicians, particularly in a nascent democratic culture, have to successfully engage masses. Merely having sympathetic attitude towards masses will perhaps make you a respectable philanthropist but not a successful politician.

Imran and for that matter a large chunk of professionals belonging to the middleclass have to realize that in politics you have to engage and on issues which matter to MAJORITY of the people also. Yes corruption is an issue but is not the sole issue. Yes sovereignty is an issue but once again not that important. And yes, downright condescending attitude smacking of intellectual arrogance towards masses will not endear you to them.

For convincing you have to go mainstream and take your case to the masses. Engage them and that is how a polity changes in democracy. Unfortunately we are not ready for making such engagement and no wonder end up yearning for the military rule again.