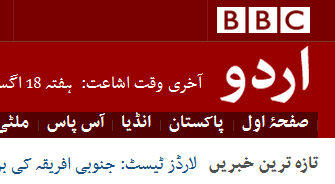 BBC Urdu claims to be objective and transparent in its coverage of issues related to the world, particularly related to Pakistan.

However, with very few exceptions, its coverage of massacres and persecution of Shia Muslims in Pakistan is generally characterised by bias against Shia Muslims and misrepresentation of State-sponsored Shia genocide in ethnic or sectarian terms.

In this post, we present some recent examples of BBC Urdu’s anti-Shia bias and misrepresentations. This, by no means, is an exhaustive list, and unless editors and managers of BBC Urdu review their policies, the list can only grow.

1. There seems to be an unwritten policy on BBC Urdu to censor or understate Shia genocide currently taking place in Pakistan at the hands of Deobandi (not Sunni) militants of Sipah Sahaba (ASWJ-LeJ, also affiliated with Taliban and Al Qaeda).

We think it is important to clearly highlight the identity of the killed (Shia) and the killer (Deobandi militants, some of whom are at least indirectly supported by Pakistan’s military establishment).

By reporting acts of Shia genocide by Deobandi militants of LeJ-ASWJ-Taliban (who also kill Sunni Barelvis, Ahmadis etc) as Sunni-Shia sectarian violence, BBC Urdu blames Sunni Muslims as responsible for Shia genocide in Pakistan, which is a lie and a deeply insensitive misrepresentation. Thousands of Sunni Muslim citizens in Pakistan have also been targeted by the same groups that are killing Shia Muslims here.  The victims also include anti-Taliban Sunni Muslim leaders who have spoken out against suicide bombing.

Here is one of several examples:

In the above article:

a. There is no mention of the Shia identity of the killed persons.

b. Shia genocide has been misrepresented as an ethnic issue confined to Hazara tribe only. This ignores the fact that non-Hazara Shias in Quetta and other parts of Balochistan, and Shias of all ethnicities in all provinces and areas are being killed by LeJ-ASWJ-Taliban not due to their ethnicity but their faith / sect.

Those killed on that day were Qandahari-Yusufzai Shias, who are not Hazaras. Those who want to misrepresent Shia genocide want to give it an ethnic colour (Hazara specific only) and also refrain from identifying the
killers (ISI-backed ASWJ-Taliban).

It is important to represent Shia genocide as Shia genocide. This is the least which we could do to help innocent Shias.

In particular, BBC Urdu cites two persons whose views on Shia genocide or Shia Muslims have been very controversial. For example, Raza Rumi (head of pro-establishment think tank Jinnah Institute, and editor of The Friday Times) has a consistent pattern of misrepresenting Shia genocide in ethnic or sectarian terms. Similarly, Tarek Fatah (Pakistani-Canadian activist) is known to have confusing views about Shias as reflected in his Blaming-the-victim approach during the brutal crackdown of Pro-Democracy activists in Bahrain.

Refer to Sectarianism and racism: The dishonest narratives on Bahrain – by Hasnain Magsi ; an article which highlights such arguements where the victim themselves are maligned in order to deflect attention away from the real issue which is the decades long pro-democracy movement in Bahrain.  While Fatah is generally quite progressive, too often he reduces Shia issues as being limited as an  extension of the Khamenai regime –  a common tactic to delegitimize Shia grievances and suffering.

Ironically, the BBC has picked up this video very late despite the fact that this video was first circulated by ShiaKilling.com and first extensive post (in fact a series of posts) around that video was published on LUBP, Pakistan’s most visited social media website. 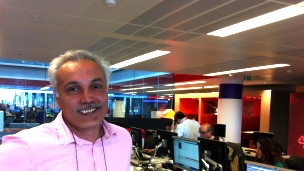 Wonder if you or BBC Urdu would care to write a post on the two new videos of Shia genocide which are being ignored by  Pakistan’s mainstream media. Anti-Shia progroms are being underplayed or ignored in Pakistan. Can BBC Urdu help please?

4. Misrepersentation of Shia genocide as a Hazara ethnicity specific issue:

This constitutes enough evidence that BBC Urdu tries to misrepresent Shia genocide in Quetta as a Hazara specific ethnic issue, and misreports non-Hazara Shias killed in Quetta as Hazaras.

5. Misrepresenation of Shia genocide as routine Sunni-SHia sectarian violence, wiping out the Shia identity of the killed people, while holding Sunni Muslims (not Pakistani State-sponsored ASWJ-TTP terrorists) responsible for violence against Shias:

6.  In BBC Urdu’s report on HRCP’s statement on Shia genocide, there are glaring omissions in the Urdu translation reported by BBC Urdu website where Shia genocide is misrepresented in ethnic terms and Hazra ethnicity is described as Hazara sect (Hazra friqah) etc.

BBC Urdu does not offer an honest translation of HRCP’s original statement.

Instead of honestly presenting Shia genocide as target killing of Shia Muslims due to their faith/sect, BBC Urdu (who is the translator / editor) converted it into a Hazara ethnic issue?

What exactly is Hazara firqah?

For example, one activist of an ethno-centric Hazara political party (Hazara Democratic Party, which is said to be a Quetta version of pro-ISI parties) is often projected on BBC Urdu as a Shia activist, allowing him to broadcast his party’s sinister agenda and discourse in a very non-transparent manner. Together with two other persons, he is a member of HDP social media cell. They always misrepresent Shia genocide in ethnic terms to extract political mileage for their HDP. Why no transparency?

Similarly, why is there a lack of transparency about Raza Rumi, he is head of pro-establishment Jinnah Institute, and has published misrepresenting analyses of Shia genocide.

8. BBC Urdu has a consistent pattern of unreporting or misreporting Shia genocide in Pakistan. For example, read this report by @BBCUrdu on attack on Shia Muslims on 17 August 2012.

See something missing? Of course, no mention of Shia identity of those killed. Will BBC Urdu also stoop to wiping out the Jewish identity of the millions of innocent victims of Nazi Holocaust? Will it now also stoop to (mis)represent Jewish massacres by Nazis as sectarian or ethnic violence?

9. We also wish to know why Shia Muslims were described as an “Aqliat” in a recent article by BBC Urdu? “Aqliat” in Pakistani context is a word used for non-Muslims and the BBC Urdu is too well aware of such sensitivities. No? Does not BBC consistently and unashmaedly use ibadat gah to describe Ahmadiyya Muslims’ mosques?

This is more like LeJ Chief Malik Ishaq’s discourse being circulated via BBC.

According to a fellow commentator on Pakistani politics and media:

The BBC Urdu has always reported the Shia genocide in terms of “sectarian violence”. This expression hides more than it tells. Who is doing the violence? Are the parties involved in the violence equally guilty? And when it names the parties, it calls it Shia-Sunni sectarian feud or violence, as if the Shias were as violent as the Sunnis. Worse, the BBC never identifies the radical Takfiri Deobandis/Salafis who attack the Shias. By calling the attackers Sunnis, the BBC makes the real scenario blurred.

10. BBC Urdu published a report on 17 December 2012 (written by Ahmed Wali Mujeeb) in which Shia genocide in Quetta has been misrepresented as a Hazara specific ethnic issue, and an outcome of Iran-Saudi proxy war. https://lubpak.net/archives/233665

In the end, we remind editors, reporters and managers of BBC Urdu of their ethical and professional duties to Pakistan’s Shia Muslims, the most target killed faith group in Pakistan. More than 19,000 Shias have been killed in the last few decades in what may be described as a slow motion Shia genocide. We are still counting more dead bodies on daily basis.

According to a Chinese adage: “The beginning of wisdom is to call things by their right names.” When will BBC Urdu acknowledge that ISI-sponsored Shia genocide in Pakistan is not a Sunni-Shia sectarian or Hazara specific ethnic issue?

By providing honest, accurate, due coverage of Shia genocide by Takfiri Deobandi militants of Sipah Sahaba Taliban, BBC Urdu can indeed contribute to highlighting this topic which remains hushed up or misrepresented in Pakistan’s mainstream media. Of course, many of the constraints facing Pakistani media persons may not there on those working in BBC offices in London.

Please participate in a formal campaign on Twitter, blogs, facebook, email, phone etc to remind BBC of its ethical and professional duties to Pakistani Shias.

Every single tweet, email, comment counts. Your inaction or action may make a huge difference to thousands of Shia Muslims who are being killed by Jihadi-sectarian footsoldiers of Pakistani state and re-killed by dishonest reporters and editors in mainstream media.

In your tweets on this topic, use this tag: #ShameBBCUrdu so that there is a systematic, effective effort.

You can tag not only the following but also all important political or media persons, human rights groups, in Pakistan UK, USA etc to highlight BBC Urdu’s bias.

Use some of the following in your tweets or emails:

We ask @BBCUrdu to refrain from misrepresenting #ShiaGenocide as an ethnic or sectarian issue. #ShameBBCUrdu

@BBCUrdu must stick to its promise of trust, honesty and transparency in its coverage of #ShiaGenocide in Pakistan. http://www.bbc.co.uk/bbctrust/

We encourage all Shia, Sunni, Ahmadi, other activists to formally complain to senior management about BBC Urdu’s neglect/misrepresentation of Shia Genocide in Pakistan

Pakistanis in the UK can lodge a formal complaint against @BBCUrdu on this website: http://www.bbc.co.uk/bbctrust/

You can also lodge complaints directly on BBC Urdu website:

You can send your complaints to the BBC Urdu editor via email:

Click here to post a comment
It’s all about power: Al-Quds Day a celebration of hatred and racism – by Michael Coren
Zardari performs hajj and umras around anti-Shia Islamofascists at OIC meeting in Makkah