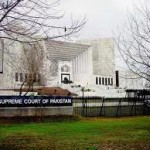 This business of the Supreme Court taking it upon themselves to overrule the people’s elected representatives in parliament is really getting ridiculous. Now, having failed to fix the match, the Supreme Court appears to be trying a little spot-fixing of its own.

The Supreme Court (SC) has extended the tenure of 32 additional judges working in the high courts of the four provinces till further orders. The eleventh hour decision has been taken to overcome the situation created by a legal void due to delay in implementation of Article 175-A, which lays down the procedure for appointment of judges to the superior courts. Although the order for such an extension was critical for the effective functioning of the high courts, particularly the Balochistan High Court, whose all four judges’ one-year term was about to expire on September 5, some quarters have questioned the appropriateness of the SC, instead of parliament, issuing such an order. The SC took this decision in response to letters from the chief justices of the four high courts requesting resolution of the issue of judges’ appointments.

This time, the Chief Justice has stepped over the line. This business should be declared a no ball and the court should move on to important issues. As I am writing this, Lahore is under the control of Rangers, and there are hundreds either dead or injured following a vicious attack by Lashkar-e-Janghvi against a procession of Muslims. Oh, that’s right – they are Shias. It’s important to remember that you can be the wrong kind of Muslim in this country.

Still, the courts continue to ignore terrorists like Malik Ishaq and the men like Rana Sanaullah and Shahbaz Sharif who inexplicably continue to make their crimes possible.

Malik Ishaq of the LeJ is accused of carrying out hundreds of murders but was not convicted because of lacunas in the legal system and the police’s inability to collect evidence or run a sound witness protection programme. Resultantly, he is being kept in jail under the Maintenance of Public Order act; there is no other substantive case against him. Let us also not forget that there are many in the lower judiciary who are sympathetic towards the jihadi mindset. Not surprisingly, Malik Ishaq was apparently allowed to cross-examine prosecution witnesses inside jail even in cases not related to him. The police official who tried to stop this practice was later murdered.

Shahbaz Sharif is responsible for agreeing to keep silent on the jihadi ‘assets’. According to one source in the government, there was an understanding that he would take care of these elements, especially while the military was busy in the tribal areas. Therefore, the Punjab chief minister and his loyal law minister, Rana Sanaullah, deflected attention away from Punjab. There were even occasions when senior police officers covered up the jihadis’ tracks and maligned those that warned about such threats.

The constitution is quite clear about the appropriate body for making changes – the parliament. This may be a thorn in the side of the Chief Justice, but we live in Pakistan, not Iftikharistan. He should let the parliament do its job and he do his own job also.

It’s a problem we’ve highlighted before: Terrorists getting more legal rights than honest citizens. How many more people have to die before the Chief Justice stops spot-fixing and starts throwing these bloody terrorists out!