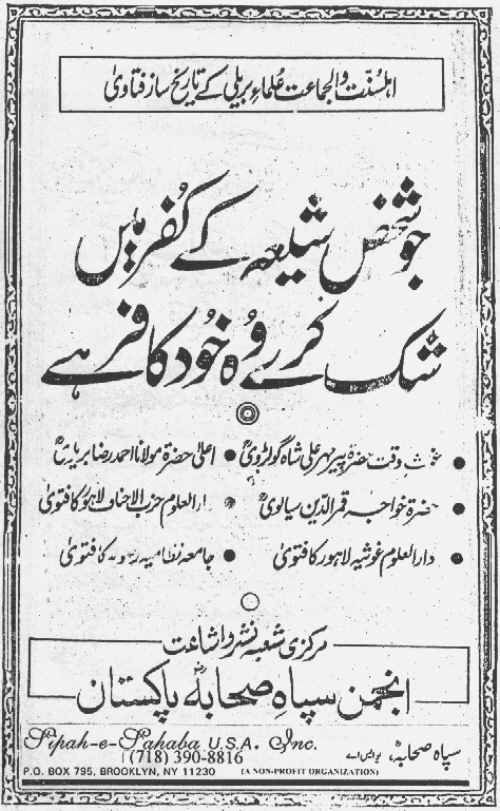 We are cross-posting an important article by Dr. Murtaza Haider in which he offers an overview of the Pew Survey data on “The World’s Muslims: Unity and Diversity” which was published less than a week ago (on 9 August 2012).

The results of the Pew Survey confirm what LUBP has been reporting in the last few years, i.e., a deeply ingrained hatred of Shia Muslims in Pakistan’s majority Sunni population (with some notable exceptions). This hatred of Shias (and also hatred of Ahmadis – only 7% respondents in Pakistan consider them as Muslims – and to a lesser extent hatred of Sufi Barelvis – only 70% respondents in Pakistan consider them Muslims) is found in all segments of society, including the educated, upper-middle class. No wonder Pakistan has the highest rate of target killing of Shia Muslims in the world at the hands of radical Sunni Deobandi-Wahhabi militants (at least 19000 Shias killed in last few decades) while the majority of Sunnis including many “noted liberals”, “Marxists”, “leftists” or “moderate” right-wingers remain either silent on State-sponsored Shia genocide or continue to misrepresent it in ethnic or sectarian terms. It is the same class which describes LUBP as sectarian only because this blog highlights Shia genocide as well as massacre and persecution of other disadvantaged groups eg, Ahmadi, Barelvi, moderate Deobandi etc.

The aim of highlighting the Pew data is to stir a debate on this tabooed and much ignored topic. Sunnis and Shias of Pakistan, particularly those of educated, upper-middle class backgrounds, need to more openly discuss each other’s beliefs and practices, and publish them in blogs, media, parliament, textbooks etc, not with a view to create more divisions or animosity but to create more informed understanding and acceptance of each other’s faith. Sweeping this topic under carpet and forging an imaginary one-Muslim no-sect identity is nothing but an illusion and a deception. Sunnis, Shias, Ahmadis, Sufis etc should more openly declare their faith/sect identity and be willing to understand and accept each other’s sects as equally legitimate interpretations and practices of Islam.

The full report (Pew Survey) can be downloaded from the following link:

Dr. Haider’s column published in Dawn is reproduced below:

Who gets to be a Muslim in Pakistan? – by Murtaza Haider
Source: Dawn

If Muhammad Ali Jinnah were alive today only half of Pakistan would consider him a Muslim. The ethnic, sectarian, and tribal fault lines have reached such depths that the nation once founded to be the homeland of Muslims is now bickering over who gets to be called a Muslim.

The latest poll by the US-based Pew Research Center has exposed the depth of sectarian fault lines where only one in every two Sunni Muslims in Pakistan accepts Shias as Muslims. While many believed that such extreme sectarian views were held only by the fanatics lying at the margin, the Pew Center’s findings reveal that such intolerant and extremist views are in fact mainstream in Pakistan. Even Jinnah, a Shia Muslim and the founder of Pakistan, today would not have escaped the sectarian extremism in Pakistan.

Based on a comprehensive survey comprising face-to-face interviews with 38,000 Muslims in 39 countries and territories, the Pew Research Center paints a picture of the diverse religious beliefs amongst Muslims. The sectarian strife varies a great deal from Azerbaijan where 90 per cent of Sunnis believe Shias are Muslims to Kosovo where only 20 per cent hold the same view. In Arab countries where Shias account for fewer than 5 per cent of the population (e.g., Jordon, Egypt, and Morocco) the majority believes that Shias are not Muslims. On the other hand Arab countries with significant Shia populations, i.e., Iraq and Lebanon, show signs of sectarian harmony where overwhelming majority of Sunnis accept Shias as Muslims.

The same survey could not be conducted in India, Iran, and Saudi Arabia because of security concerns for the enumerators. 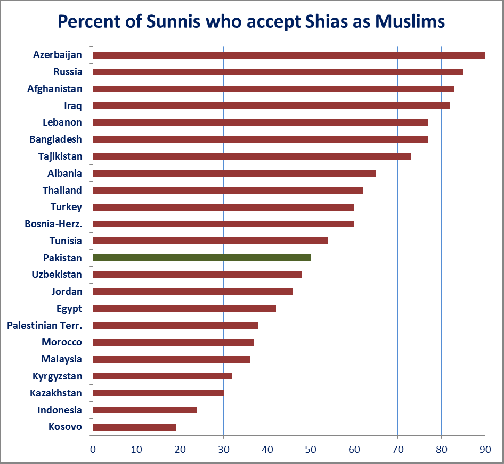 Many in Pakistan would question the motives behind the Pew survey while others might question the robustness of results derived from a survey of few thousand respondents. Some would argue that such surveys by western organisations are intended to further exacerbate sectarian strife in Pakistan. Others would contend that results based on surveys are not credible.

It is rather odd to see such lame arguments being repeated every time new evidence is brought to bear on sectarian violence in Pakistan. It is more than convenient for those who benefit from the status quo to discredit reports by others while at the same time they do nothing else to verify these findings. It is extremely disappointing to realise that even after several thousand deaths in sectarian violence, independent studies of it, causes and motives do not originate within Pakistan.

Many in Pakistan mistakenly believe that survey-based research is not credible and maintain that unless the entire population is polled, the results would not be credible. For them findings derived from Gallup polls and Pew surveys are dubious at best. Again, this exposes the poor state of social science education in Pakistan. Across the globe most, if not all, economic and social policy is based on findings derived fromdata captured in surveys. Multi-billion dollar businesses rely on samples of 1,500 to 3,000 respondents to conduct market research and devise business strategies. Even census in most countries is not based on the entire population.

The confusion about basic research methodology exists even amongst university educated Pakistanis because they were not exposed to the fundamentals of research methods. However, this does not prevent them from using their ignorance to ignore the uncomfortable truth about the moral decay that now confronts Pakistan in its most violent manifestation.

Just who is not a kafir? – by Amir Mir

Click here to post a comment
Taliban’s attack on PAF base Kamra: Pity the nation whose security is in the hands of Dangerous Duffers
Managing disasters require scientific approach – by Qudrat Ullah