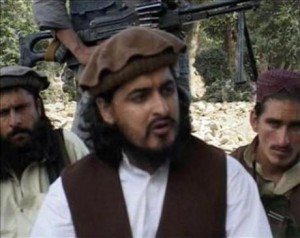 The US designated Pakistan-based Tehreek-e-Taliban (TTP) as Foreign Terrorist Organisation (FTO), paving the way for overseas travel ban on its leaders and financial restrictions on the dreaded group. US prosecutors have charged the leader of the Pakistani Taliban, Hakimullah Mehsud, in the plot that killed seven CIA employees at an American base in Afghanistan last December, the Justice Department said on Wednesday
Secretary of State Hillary Clinton designated the TTP a foreign terrorist group on August 12, and it was formally put on the blacklist when it was published today on the Federal Register.
The terror group’s top leaders, including its chief Hakimullah Mehsud and his deputy Wali Ur Rehman, were  named as “specially designated global terrorists”, a category which will impose more State and Treasury department sanctions.
Tehreek-e Taliban is the militant umbrella group that include members from all of Pakistan’s seven tribal agencies as well as several districts of the restive Khyber- Pakhtunkhawa province.
Clinton said that each militant leader has “committed, or poses a significant risk of committing, acts of terrorism that threaten the security of US nationals or the national security, foreign policy, or economy of the United States.”
TTP chief Hakimullah had threatened the US with deadly attacks if it continues its operation and drone attacks inside Pakistan. The US drone attacks killed several top TTP leaders including Hakimullah’s predecessor Baitullah Mehsud.
US lawmakers have been pushing for a ban on TTP following a failed attempt by Pakistan-born American Faisal Shahzad to blow up an explosives laden vehicle at Times Square on May 1.
Shahzad said he trained with the Pakistani Taliban to build bombs, then returned to the US to launch an attack that would avenge attacks on Muslims by US forces overseas.
“These actions will help stem the flow of finances to TTP and provide the Department of Justice with a critical tool to prosecute those who knowingly provide material support to TTP and its senior leaders,” Assistant Secretary of State for Public Affairs Philip J Crowley said.
US has announced a USD five million reward for any information leading to the arrest of Mehsud or Rehman. The Department of Justice has filed an arrest warrant for Mehsud and charged him with conspiracy to murder US citizens abroad and conspiracy to use a weapon of mass destruction.
TTP has claimed responsibility for numerous terrorist acts against Pakistani and US interests under Mehsud and Rehman’s leadership, he said. “TTP and al-Qaeda have a symbiotic relationship; TTP draws ideological guidance from al-Qaeda, while al-Qaeda relies on TTP for safe haven in the Pashtun areas along the Afghan-Pakistani border. This mutual cooperation gives TTP access to both al-Qaeda’s global terrorist network and the operational experience of its members,” he said.
TTP is suspected of being behind the 2007 killing of former Pakistani Prime Minister Benazir Bhutto. “We are determined to eliminate TTP’s ability to carry out terrorist attacks and to disrupt, dismantle, and defeat their networks,” said the Department of State’s Coordinator for Counter-terrorism Ambassador Daniel Benjamin.
“Today’s actions put the TTP and its sympathisers on notice that the United States will not tolerate support to this organisation, which has inflicted great harm to US and Pakistani interests,” he added
U.S. military forces have tried to kill Mehsud since the attack with strikes by unmanned aerial drones. The State Department is offering a reward of up to $5 million for information leading to his location.

There were reports in January that Mehsud was killed in a drone strike but he later appeared in Internet videos threatening suicide strikes in the United States. The tribal areas of Pakistan have become a haven for the Taliban and al Qaeda militants.